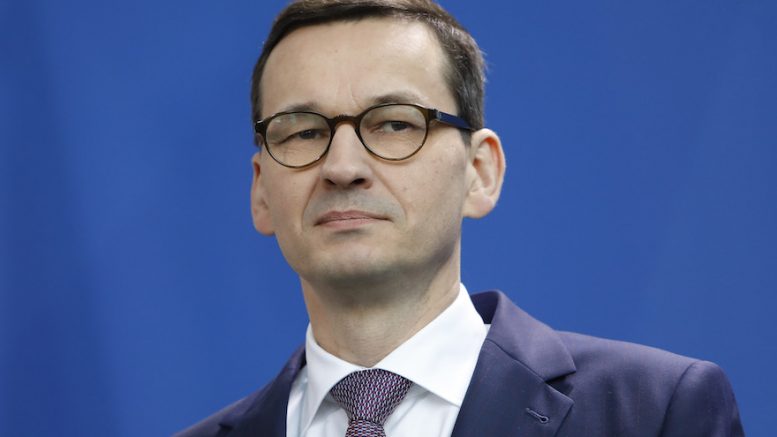 (JTA) — The row between Poland and Israel about the Holocaust reached new heights this week after Poland’s prime minister said that the genocide had not only Polish, Ukrainian and German perpetrators, but Jewish ones as well.

Addressing a new law that criminalizes blaming Poland for Nazi crimes, Mateusz Morawiecki said in an interview Saturday that the law’s effects would not be as sweeping as its critics complain.

If his statement was meant to soothe the law’s critics – they include international Jewish groups and Israeli Prime Minister Benjamin Netanyahu, who called the legislation baseless in a rare rebuke of an ally of Israel — then Morawiecki failed spectacularly.

“There is a problem here of an inability to understand history and a lack of sensitivity to the tragedy of our people,” the Israeli leader said.

Another Israeli leader, President Reuven Rivlin, offered his contempt for the remark.

“Saying that Jews collaborated with the Nazis is a new low,” he said.

Jonny Daniels, an influential commemoration activist in Poland who is friendly with Morawiecki, called it a form of Holocaust denial.

What Morawiecki said is technically accurate, but historically unfair in light of the specific nature of the Nazi persecution of Jews, according to scholars who have studied the dozens of indictments brought forward in Israel against Nazi collaborators.

Until 1972, dozens of indictments led to trials in Israel of alleged Jewish collaborators with the Nazis, said Rivka Brot, a fellow at Bar-Ilan University’s Center for Jewish and Democratic Law. Brot wrote her doctoral thesis on the prosecution of Jewish collaborators by Jewish tribunals in transit camps in Europe after World War II, and later in the State of Israel.

None of the trials ended with a sentence longer than 18 months in prison.

Even before Israel’s establishment, dozens of unofficial communal tribunals were set up to process hundreds of complaints against alleged Jewish collaborators in displaced persons camps in Europe, Brot said. Lacking binding legal powers, these tribunals could pronounce symbolic guilty sentences that meant excommunication for the convicted.

Brot said the offensive element in Morawiecki’s remark is not that he mentioned Jews who collaborated with the Germans, but that he listed them alongside Polish collaborators.

“Any comparison between Jewish collaborators and Polish ones is false,” she said. “The Jewish prisoners who collaborated did so under the immediate threat of death.” Poles, Brot added, suffered a lot under the Nazis, “but most were not subjected to the same circumstances as Jews destined for annihilation.”

Jewish collaborators included “kapos” and other functionaries of the internal power structure that the Nazis forced Jews to form in camps and ghettos, Brot said.

Additionally, some Jews helped the Nazis track down other Jews living in hiding in exchange for the collaborators’ freedom or that of their relatives.

Jews who collaborated inside camps and ghettos often said in their defense that they did so not to better their own situation but to better the lives of other Jews.

Eliezer Gribaum, a Polish Jewish kapo who was accused of mercilessly beating inmates at the Birkenau camp and was later killed in Israel’s War of Independence, said he accepted the position at the request of other Jews who needed protection from an anti-Semitic non-Jewish kapo, a German criminal.

The case of Jews who remained outside camps or ghettos by helping the Nazis hunt down other Jews appears even murkier.

Notorious among them was Stella Kubler, who began hunting Jews for the Nazis to keep her parents from being deported and stayed in their service until the war’s end. She and other Jewish hunters of Jews were given special papers by the Gestapo and even weapons. Some even received a cash bonus of 200 marks for every Jew they helped deliver.

Some of them, including Rolf Isaaksohn, delivered to the Nazis their own relatives — an uncle, in Isaaksohn’s case, according to a 1992 Der Spiegel expose about Jewish hunters of Jews.

Kubler was tried twice for her actions, which resulted in the murders of dozens: Once by a Soviet tribunal that sentenced her to 10 years in jail, and then by a West German one, which convicted her but did not sentence her to any additional prison time. She spoke with raw hate about the Jewish people, and until her death in 1994 was a favorite among publishers of anti-Semitic literature.

Members of Judenrats, Jewish councils set up in ghettos that were answerable to the Germans, constitute yet another variant of collaboration.

Dozens of them committed suicide to avoid carrying out the Germans’ orders of annihilation against vulnerable ghetto populations, such as children and women, Dina Porat, chief historian for the Yad Vashem Holocaust museum in Israel, told JTA. Others cooperated with the Nazis out of fear that the ghetto would be subject to mass reprisals if they didn’t.

Other Judenrat leaders, however, seemed to relish the powers vested in them. Notorious among them was Chaim Mordechai Rumkowski of the Lodz ghetto.

Moving around the ghetto on a broken-down horse-drawn carriage, Rumkowski instituted currency bearing his signature and postage stamps with  his image, earning him the sarcastic nickname “King Chaim.” Infamously, he urged his subjects to hand over their children to the Germans, who sent them to be murdered. He was beaten to death at Auschwitz, where he came on the last transport.

On Tuesday, Polish Foreign Minister Jacek Czaputowicz acknowledged in an interview to the Dziennik Gazeta Prawna newspaper that there were Polish collaborators, adding that the situation concerning collaboration “was extremely complicated.” There were cases, he added, where Jews caught by the Germans led the Nazis to Poles who were hiding them. (According to one testimony, a woman in the village of Chociszewo denounced her non-Jewish husband to the Germans to pursue her love affair with a Jew whom she had hid — and who later was killed by Russian troops.)

“The indictment against all of those collaborators may appear similar,” Porat said, “but the context in which they acted is radically different.”

Be the first to comment on "Poland’s prime minister said some Jews collaborated with Nazis. Scholars say he distorted history."