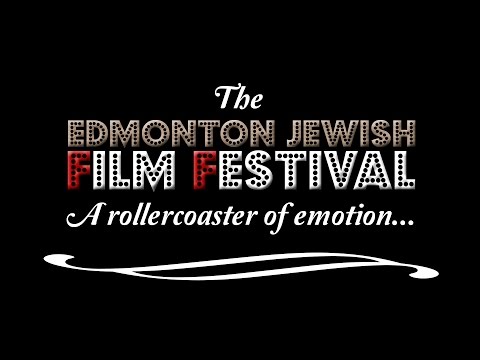 (EJNews) – Here is a peek at the feature films that will be screened at the upcoming Edmonton Jewish Film Festival, from May 15-18 and 22-24 at the Landmark Cinema 9, City Centre. Click here for ticket information. 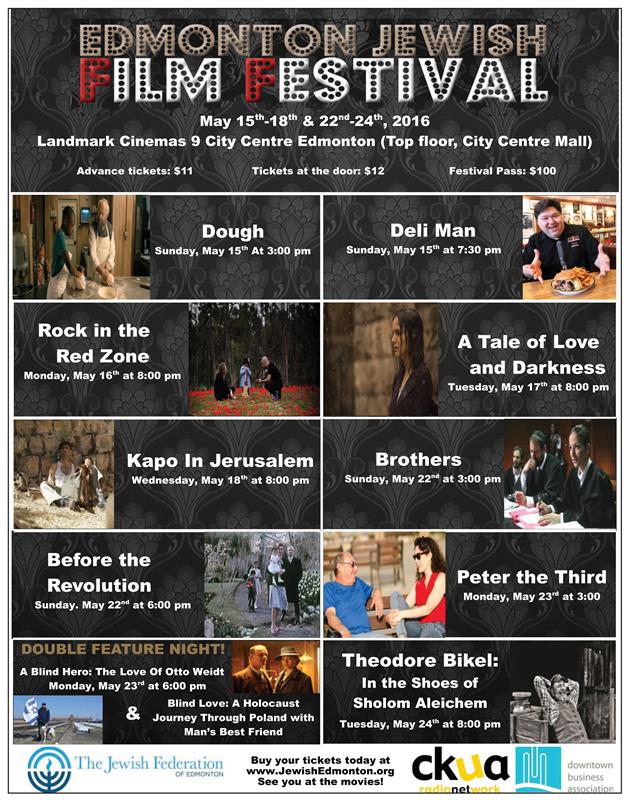 An old Jewish baker (Johnathan Pryce) takes on a young Muslim apprentice (Jerome Holder) to save his failing London kosher bakery. When his apprentice’s marijuana stash accidentally falls in the mixing dough, the challah starts flying off the shelves! Dough is a warm-hearted and humorous story about overcoming prejudice and finding redemption in unexpected places. View the trailer.

This fun and entertaining documentary serves up a mouth-watering look at Jewish deli in North America, as it salutes the inspired owner-operators who keep the savory, nostalgic food and culinary tradition alive. View the trailer.

On the edge of Israel’s Negev Desert lies Sderot, a city of factory workers and rock musicians, the children of refugees from North Africa and the Middle East. Despite being pummeled for years by homemade missiles, the people of Sderot persevere, all the while creating unique musical rhythms that have transformed Israeli music. View the trailer.

Academy Award-winner Natalie Portman stars in this extraordinary adaptation of Amos Oz’s celebrated memoir. The powerful saga is Oz’s love letter to his mother (Portman), who struggles with post-war realities and her own depression while raising her son in Jerusalem at the end of the British mandate for Palestine and the early years of the State of Israel. View the trailer.

In 1946 a pair of Auschwitz survivors arrives in Jerusalem. Upon their arrival, a rumor spreads that Bruno, a doctor, was a sadistic bloc head (“Kapo”) in Auschwitz. Doubt begins to nibble away at Sarah’s heart, while she tries her best to believe in him and support him. The film chronicles a journey through the gradually fading memory into the human and the monstrous, in Auschwitz and after it. View the trailer.

The conflict which arises between two brothers – one a Torah scholar and the other a kibbutznik – reflects that of a society torn between its religious and political principles. With restrictions on the increase and injustices multiplying, Israel today is on the brink of civil war. This film opens a subtle yet essential debate on the question of separation of the state and religion in Israel. View the trailer here.

Challenging popular misperceptions of permanent enmity in Iranian-Israeli relations, filmmaker Dan Shadur recounts the utopian existence of Israelis living in Tehran. Everything changed with the 1979 overthrow of the Shah and the arrival of the Islamic revolution. What begins as a nostalgic look back at the glory days in the Iranian capital becomes a suspenseful thriller, as the Israeli expatriates flee to safety in the face of shifting political dynamics and rising turmoil. View the trailer.

Peter, a 65 year old widower and a theatre actor who never got a leading role forms the unlikely friendship with Alona, a 28 year old talented waitress who writes blogs in her spare time. Together they form “The Widows and Widowers Party” while his Romanian friends pitch in for their cause. Peter offers Alona a place to stay and wisdom of life. She offers him the leading role of a lifetime. View the trailer here.

Blind Love recounts a trip to Poland of six blind Israelis and their guide dogs who took part in the annual March of the Living. The film poignantly captures their special bond and the importance of building a society where everyone is cherished – young and old, strong and weak, able and disabled – a world not filled with blind hate, but instead with blind love. View the trailer here.

This is the story of a blind hero – Berlin brushmaker Otto Weidt – and the daring rescue of his blind and deaf Jewish employees from the concentration camps as well as his tragic love of Alice Licht, and his desperate journey to save her and her family from the gas chamber. Award-winning journalist and author, Inge Deutschkron, provides her incredible personal account of Weidt’s efforts to save her, her mother, and the rest of his employees from the Nazis. View the trailer here.

Theodore Bikel: In the shoes of Sholom Aleichem (2014)

The stories of two beloved Jewish icons are woven together in this enchanting documentary: Sholem Aleichem, the great Jewish storyteller, and Theodore Bikel, troubadour, actor and one of the most popular stage interpreters of Aleichem’s work. The prose of Aleichem (1859–1916) portrays like no one else the true soul of the tragicomic Jewish shtetl life. Fiddler on the Roof, the Broadway and Hollywood musical adaptation of Aleichem’s Tevye the Milkman short stories, has immortalized him. Theodore Bikel, who passed away in 2015, brilliantly portrayed Tevye on the American stage countless times. View the trailer here.

Be the first to comment on "What’s on at the 2016 Edmonton Jewish Film Festival?"