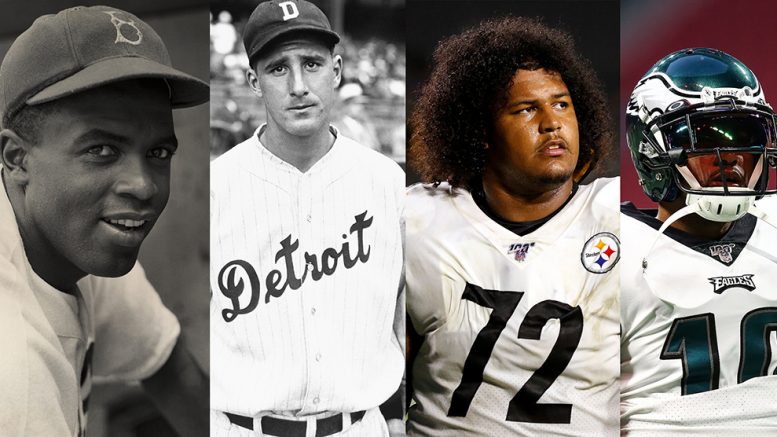 After describing his horror at the 2018 Pittsburgh synagogue shooting, Banner preached that as important as the work of Black Lives Matter may be, its achievements cannot come by stepping on the backs of other people or by vilifying Jews.

In Banner’s own words, “We can’t preach equality but in result we’re just trying to flip the script and change the hierarchy … Change your heart, put your arm around people, and let’s all uplift each other.”

In the days since, Jackson has both issued an apology and begun to engage with the Jewish community.

This video is to transition from the incident, and move forward as a community. Not to harp on @DeSeanJackson10 mistake, but to progress by educating ourselves. We can’t move forward while allowing ourselves to leave another minority race in the dark.#Equality pic.twitter.com/MnLnCCYzQL

This is not the first time Steel City sports has given Black-Jewish relations a much needed shot in the arm.

The year was 1947. Hank Greenberg, the legendary Jewish slugger and longtime Detroit Tiger, had been traded due to the reserve clause to the Pittsburgh Pirates for what would be his final season. Throughout his career, Greenberg had been subjected to just about every anti-Semitic insult imaginable.

Playing first base that day for the Brooklyn Dodgers was Jackie Robinson, the rookie who had recently broken Major League Baseball’s color line. Days earlier, according to the Journal of Sport History, Robinson and his family had received threats on his life and that his infant son Jackie Jr. would be kidnapped. Members of opposing teams sat in their dugouts pointing baseball bats at him — simulating machine gun noises. The hotel in which the Dodgers stayed refused to admit Robinson. Not surprisingly, Robinson’s batting average had slumped and he was contemplating quitting.

After laying down a perfect bunt early in the game, Robinson collided with Greenberg, who was also playing first base. The following inning, Greenberg was walked and, arriving at first base, asked Robinson if he had been hurt in the earlier collision.

According to a New York Times report, Robinson assured Greenberg that he hadn’t been, at which point Greenberg said to Robinson, “Don’t pay any attention to these guys who are trying to make it hard for you. Stick in there. You’re doing fine. Keep your chin up.” Following the game, Jackie told The New York Times, “Class tells. It sticks out all over Mr. Greenberg.”

Robinson was deeply moved by the supportive words of Greenberg, who was praised in the African-American press. The two men would remain friends into the years ahead — both giving testimony in Curt Flood’s 1972 historic Supreme Court case on the aforementioned reserve clause (the mechanism used by teams to hold on to the rights of players even after their contracts had expired).

Who would have imagined that some 70 years after the Greenberg-Robinson exchange, it would be an African-American athlete — Zach Banner — who would call out his own community on prejudice against Jews?

Bias operates in every direction — sometimes at the same time — and the pressures of the pandemic run the risk of bringing out the worst, not the best, in people. The examples of Greenberg and Banner are instructive because both men would have been well within their rights to be bystanders, carrying on with their business as athletes. Instead, both chose to be upstanders — allies in fighting prejudice.

In the years ahead, Greenberg would leverage his stature as Cleveland’s general manager, refusing to let his team stay at any hotel that denied admittance to all his players, remembering when he as a ballplayer had been denied to stay at hotels because he was Jewish. On and off the field, the examples of Greenberg and Banner show the power of one’s personal example to prompt much-needed dialogue and societal change.

In his 1963 opening address at the National Conference on Religion and Race, Rabbi Abraham Joshua Heschel said, “To think of man in terms of white, black or yellow is more than an error. It is an eye disease, a cancer of the soul.” In calling out racism as an eye disease, Heschel signaled that as important as sit-ins and freedom rides — or, in our own day, Black Lives Matter, police reform and tearing down Confederate monuments — the first step in fighting racism is for people to identify prejudices within, dismantle them and set a personal example for others to follow. Some may be more guilty than others, as Heschel taught, but all of us are responsible.

Confessions of bias need not be damning; they are opportunities to acknowledge the work yet to be done. When it comes to building an inclusive society, it is a self-fulfilling prophecy. If we do not want the next generation to inherit and internalize deeply ingrained notions of race, then we must work to eliminate the structures that serve to perpetuate them.

It is simply not enough to consider oneself to be one of the good guys and go about one’s business. One must check one’s implicit biases, live intentionally knowing they are present, be willing to publicly model behavior for others to follow and work together toward effectuating much-needed societal transformations. The fact of our flawed humanity reminds us that we are all capable of doing better.

In simpler terms, we must do what Greenberg did in 1947, what Heschel taught in 1963 and what Banner posted the other day. Change our hearts, put our arms around people and uplift each other. It’s not everything, but it is something, and it’s certainly better than nothing. It is, one might say, first base. Maybe from there we will round the bases together, creating a world worthy of our hopes and dreams for our children and grandchildren.