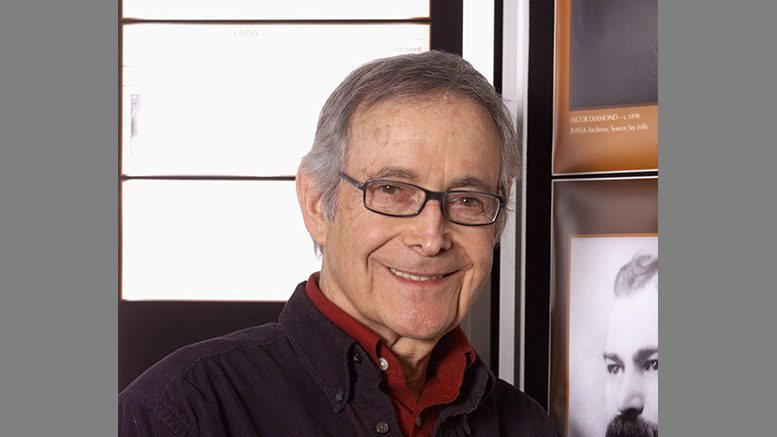 Jay Joffe, 2005. Photo: Impressions by Switzer. (Reprinted from the November 2006 edition of the Journal of the Jewish Historical Society of Southern Alberta.)

(Editors note: The following was written for the Journal of the Jewish Historical Society of Southern Alberta in November 2006, based on a presentation made by JHSSA Director Therese Nagler at the JHSSA 2006 AGM.)

(JHSSA) – The fact that we are assembled here tonight to celebrate the 16th annual general meeting of the Jewish Historical Society of Southern Alberta is, in itself, a tribute to Jay Lionel Joffe.

Jay, born in Drumheller in 1931 to the late Hattie Diamond and Noah Joffe, was the proud grandson of the first permanent Jewish settlers in Alberta – Jacob and Rachel Diamond, who arrived in the area in 1889. This fact, coupled with the knowledge of the community-building spirit of the older Diamond, may have sparked Jay’s quest for the preservation of our collective history.

Jay was a resident of Calgary for most of his 75 years and an ardent volunteer for many organizations. The creative ability which enabled Jay a successful career in advertising also served the community well. His vision and motivational skills launched many projects within our city: such things as the presentations to the International Olympic Committee which paved the way for the acceptance of the Calgary’s bid to host the Winter Olympics in 1988; and the successful bid to Rotary International, which brought to our city the largest convention, to that time, ever hosted here.

Jay had served as President of the Rotary Club of North Calgary, President of the Southern Alberta Pioneers and their Descendants, a member of the Calgary Stampede Historical Committee – and author of their acclaimed “Parade of Posters”, an active member the committee to form the Centre for Performing Arts, a board member of the Harry and Martha Cohen Foundation, a respected docent at the Glenbow Museum and so much more.

Once he retired Jay’s passion for discovering and preserving history became inflamed. Seeing his grandfather’s photo displayed on the wall of the Southern Alberta Pioneers’ building re-ignited his desire to learn more and to share this knowledge. Jay often said, “In general, when people speak of the early settlers, they are called ‘pioneers’; when referring to the Jews, they are called ‘immigrants’.” He devoted much time and energy in trying to dispel ill formed premise.

No “ivory tower” projects for Jay – he felt that everyone should be a historian. Each family’s contribution could and should be documented and all of us could take part in weaving together the story of our collective past. Jay Joffe was a humanist and that was his approach. History, he felt, was not something to be kept in boxes, but to be viewed and enjoyed by all of us. Participation was the key.

In 1988 this “fire in his belly” brought him to Calgary Jewish Community Council, where he revealed his dream of publishing a history of the community and of setting up an organization to do just that. He was convincing. After hearing Jay’s proposal, Hal Joffe, Jewish Community Council president, stated, “Our community is now a vibrant and active one, but we must ensure that our pioneers are remembered for their efforts to firmly plant cornerstones for us.”

Riki Heilik, serving as liaison from Community Council, provided assistance obtaining organizational records and help with obtain grants and monies for this purpose. With a small provincial grant, Jay involved Trudy Cowan and Robert Paine as researchers and in 1989, Shorashim (Roots) was published. This project catalogued and summarized all known Jewish historical resources in Calgary and brought together fragmented information previously not readily available to the community. To quote Riki, “It was an inspiration to work with Jay. He was a visionary, a person with a dream, but also a pragmatist who had the skills to implement his vision. Some people “dream” and some “do”. Jay did both.”

His love of history and the desire to share it continued to grow and he struck a committee which led to the formal incorporation of the Jewish Historical Society of Southern Alberta, in July, 1990, with Jay as its president.

With his wife Barbara’s constant love and support, he worked to leave a “yerusha” (legacy) for their sons, David and Jonathan. He sought to recognize the contribution of our early settlers and did so by honouring long-time residents of Western Canada at an annual meeting. It has become an established tradition for JHSSA celebrate our seniors who have reached the milestone of their 80th birthdays with the presentation of certificates.

An important early initiative was Discovery, the little paper we love so well. The first issue was published in the fall of 1990 with Sid Macklin as editor and Jay, associate editor. It featured an editorial by Jay Joffe entitled “Looking Back – Looking Forward”, outlining the aims of the Society and inviting the community to contribute photos and stories for a planned future exhibit. The next many issues of Discovery saw several editors, with Jay as co or associate editor, nurturing the paper and promoting his vision. Jack Switzer joined Jay as editor in 1993 and has been at its helm ever since.

Through Discovery, Jay implored, coaxed and cajoled the community to collect material and early photographs for our then limited archives. This, then, was the inception of “Land of Promise.” At this point, material was coming in ever so slowly and Jay was becoming slightly discouraged. A few of our group volunteered to go out and “get the goods”. After a few interviews we presented Jay with some delightful photos and anecdotes. He was like the proverbial “kid in a candy store”. Even more convinced of the possibilities, and with infectious enthusiasm, he never looked back.

In 1992, with the interest and help of many people, one of Jay’s inspired dreams became a reality. Land of Promise, the Society’s major exhibit of our history to 1945, had its debut at the Calgary Jewish Centre. Over 400 reproductions of photographs, documents and artifacts were displayed. Land of Promise was exhibited at Fort Calgary and in 1993 it also traveled to Edmonton and to Vancouver. Land of Promise, the book, followed in 1996. One of Jay’s proudest moments had to be when it was announced the 1,000 copies had been sold out.

Meanwhile, other projects had been initiated by Jay and the JHSSA. Early on, Trudy Cowan held a workshop on conducting oral history interviews. A committee was struck and material that might otherwise have been lost is now on record. This very important facet of the Society’s work has recently been headed by Bertha Gold and the need for on-going recording speaks for itself.

Jay, in his “spare time”, took a history course at the U of C and authored a paper on the Jewish Cemetery. This piqued his interest in that part of our history and a momentous project was undertaken. Thanks to Jay’s perseverance, the Society has inventoried all the Jewish burial sites in Calgary, Medicine Hat and Lethbridge. Each gravestone was photographed and all inscriptions were translated into English. This is an on-going project which is updated every two years.

With one successful exhibit and book under his belt, Jay looked to the “future” promotion of our past. To celebrate our province’s centennial, he envisioned a new exhibit, A Joyful Harvest, telling the proud story of more than 100 years of Jewish contribution to life in southern Alberta.

Jay’s introductory panel to A Joyful Harvest contains his heartfelt message, “…this exhibit shows that those early seeds have borne choice fruit. It illustrates that an ethnic community, regardless of size, can make a significant contribution to the social, cultural and economic welfare of the surrounding society within Canada’s multicultural setting.”

A Joyful Harvest became Jay’s passion, his fulfillment and his joy. He worked tirelessly with his team of researchers, writers and volunteers to bring this achievement to fruition. Maxine Fischbein, writer and editor, reflects, “I have never met a more dedicated or tenacious human being in my life. The enthusiasm and fervour he had for this exhibit put his stamp on each and every panel and page. This is an absolute testimony to his effort and his love of Jewish history”.

The accolades to Jay and the Society after the exhibit’s November 14, 2005 gala opening were many, and we acknowledge that without Jay’s magnificent vision and courage, it would not have been possible. Now A Joyful Harvest is on display at the Provincial Archives of Alberta in Edmonton until the end of January and in June of 2007 it will be shown at the Glenbow Museum here.

Jay was awarded a 2005 Centennial medal for his contribution and he was pleased by this and many earlier recognitions; but his real delight was in sharing the work with so many – and in having our story told.

The Society’s second book, A Joyful Harvest, based on the exhibit, will soon be going to print. What a brilliant legacy to his family and to our entire community. Jay has touched each and every one of us. It was a privilege to be associated with his endeavours.

Samuel Coleridge, in one of his essays, penned, “The dwarf sees farther than the giant when he has the giant’s shoulders to mount on.” We were so fortunate to have had a giant in our midst. Jay was a gentleman, a gentle giant and his vision, his determination and his heart were, and will continue to be, a beacon for all of us. With his shoulders to climb on, we can see a great distance into the past and into the future. May his work and his spirit endure forever.

1 Comment on "From the archives at JHSSA: A tribute to Jay Joffe z”l"