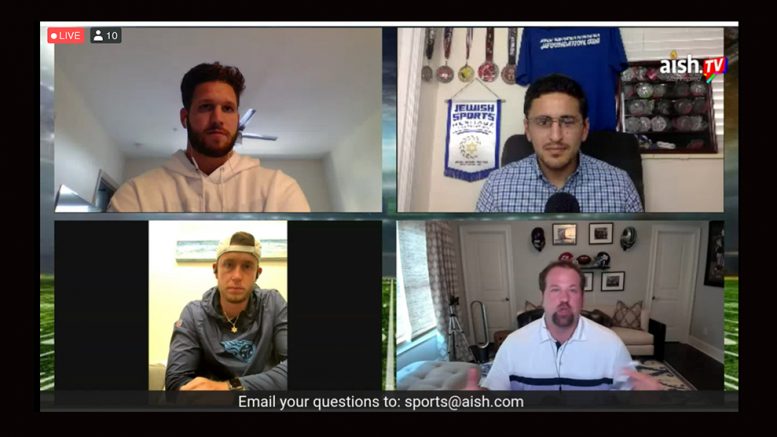 “I just thought to myself it’s ignorance — someone who has no idea whatsoever what anti-Semitism is, why his quote could be hurtful to Jews, or really to a lot of people,” said Schwartz, an offensive lineman who played for five teams in his eight-year NFL career.

Schwartz was one of nine current and retired Jewish NFLers who participated in a three-hour online event Sunday night about Jews and professional football in which many players said they had encountered few people within the league who understood their background.

The event, streamed live on Aish.tv, was the brainchild of Michael Neuman, an Orthodox Jewish psychologist who gained a measure of fame last year when he competed on, and won, the LeBron James-produced athletic competition series “Million Dollar Mile” while wearing a kippah.

Neuman wanted to continue to inspire Jews to push boundaries — “When I was a 10-year-old, I would have wanted to see a strong, powerful Jew with a yarmulke on,” he told the Jewish Telegraphic Agency — so he founded a nonprofit organization, the Jewish Inspiration Foundation, aimed at doing just that.

Weeks ago, Neuman began planning a live discussion among current and former NFL players who are Jewish in keeping with his mission to highlight “strong and powerful Jews.” But after the news broke that Jackson had posted anti-Semitic quotes falsely attributed to Adolf Hitler, the event took on both a new urgency and tone.

“I had this idea for the Jews in the NFL Summit. I wanted a way to connect, whether it’s yeshiva kids, or anyone, to get inspired,” Neuman said of the original idea. “But, I mean, the timeliness of DeSean Jackson’s comments, and apology, and then Stephen Jackson, [was] obviously showing that there’s an ignorance.”

Jackson, a veteran NFL player, had posted a page from a book that quoted Hitler as stating that “because the white Jews knows [sic] that the Negroes are the real Children of Israel and to keep America’s secret the Jews will blackmail America” and “The [sic] will extort America, their plan for world domination won’t work if the Negroes know who they were.” The quote was not genuinely said by Hitler.

Jackson later apologized, and was admonished and fined — but not suspended or released — by the Eagles, a team whose owner (Jeffrey Lurie) and general manager (Howie Roseman) are both Jewish. The reaction of most leaders of the Jewish community, in Philadelphia and nationwide, has been to reach out to Jackson in order to educate him rather than pushing for his release or suspension from the NFL.

More than one rabbi has offered to meet with Jackson, and Julian Edelman of the New England Patriots, who is Jewish, said he spoke to Jackson and invited him to visit the U.S. Holocaust Museum and Memorial in Washington, D.C. Jackson also had a conversation this weekend with a Holocaust survivor.

Schwartz said he agreed that it was better to go “the education route” than “the cancellation route” — and many of his colleagues said they shared his instincts.

“At the end of the day, if he was educated and he knew the history, he probably wouldn’t say those things,” Josh Miller, a 50-year-old retired punter, said of Jackson.

“We have to have these conversations about racism, and about anti-Semitism,” added Mike Rosenthal, who left the NFL in 2008 after nine seasons. “Let’s just talk about it. Society has to have those uncomfortable conversations.”

And Bob Stein, who in 1970 became the first Jewish player to play on a Super Bowl-winning team, called Jackson’s posts “a spectacularly ignorant set of comments.” Stein, who attended law school while playing in the NFL and later became the first president and CEO of the NBA’s Minnesota Timberwolves, said he hoped Jackson’s apology was sincere and “more than just ‘oops, I want to get out of the way of this problem.’”

Most of the players, who spoke during three separate panels, said many of their teammates had either never met a Jewish person before or knew practically nothing about Judaism. About 70% of NFL players are Black.

“There’s four or five Jews in the NFL,” said Schwartz, who with his brother Mitchell, a star of this year’s Super Bowl champion Kansas City Chiefs, wrote a book about being Jewish in the NFL. “You have teammates who are Black, and you see the pain they’re going through with the George Floyd death. They’re your friends, you buddies. It’s easy to see the pain they’re going through, and it’s easy to say ‘I’ve got you, I support you.”

But he said that the small numbers of Jewish players means their teammates were less likely to be attuned to the concerns of Jewish ones.

Bridge building can happen in the locker room, some of the players said. Greg Joseph, a placekicker who currently plays for the Tennessee Titans, said he’d had “great talks” with a Muslim college teammate, Azeez Al-Shaair, who now plays for the San Francisco 49ers.

Neuman, the organizer, said he had invited Jackson to participate. While that did not happen, Neuman said the event had achieved his goals of elevating the conversation around Jewish sports stars at a particularly timely moment.

“It was really impressive to see how all of our Jewish athlete heroes came together to share the ideas of living with tolerance and understanding each other regardless of race, religion or background,” Neuman told JTA after the event, a video of which can be viewed here.

Be the first to comment on "Jewish NFL players say education, not ‘cancellation,’ is the right response to DeSean Jackson’s anti-Semitic posts"