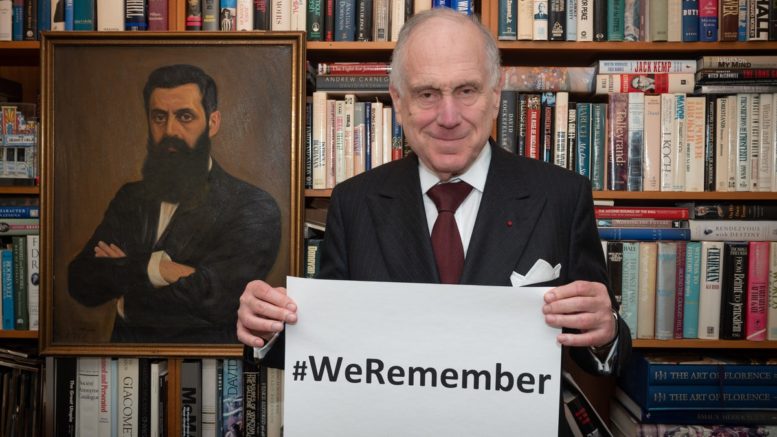 NEW YORK – In the leadup to International Holocaust Remembrance Day on Jan. 27, the World Jewish Congress has launched its seventh annual #WeRemember campaign, to learn from the past and protect the future.

The WJC initiative, which takes place Jan. 20 through Jan. 27, seeks to educate people about the Holocaust and preserve its memory, specifically as antisemitism continues to surge worldwide. At the campaign’s core is people writing the words “We Remember” on a sheet of paper, taking a photograph and then sharing it on social media, using the hashtag #WeRemember.

“Through the #WeRemember campaign, the World Jewish Congress combats antisemitism, as well as other pernicious forms of hatred and xenophobia,” said WJC President Ronald S. Lauder. “We also seek to preserve the memory of the Holocaust, especially as the number of survivors and other first-hand witnesses continues to dwindle.”

The campaign also incorporates the illumination of notable monuments worldwide, including the walls of the Old City in Jerusalem, the Reichstag in Berlin and other European parliaments, as well as the projection of moving messages in public places. Other landmarks across Israel and Germany, as well as in other European and North American nations, will also be illuminated.

Participating entities include European Commission and NATO headquarters, both in Brussels; UNESCO in Paris, where WJC is supporting the launch of the “Generations: Portraits of Holocaust Survivors” photographic exhibition at the organization’s headquarters; and Council of Europe headquarters in Strasbourg, France.

“Participation in the #WeRemember campaign, now in its seventh year, advances Holocaust education at a time of rising levels of antisemitism around the globe,” Amb. Lauder also said. “By educating the world about the atrocities of the Holocaust, we help to ensure that it is never repeated.”

The #WeRemember campaign will symbolically end on Jan. 27, at the site of the former Nazi death camp Auschwitz-Birkenau. Photographs of participants in the campaign will be showcased on a screen erected next to the infamous Auschwitz gate and cattle car, as a testament to the Jewish people’s survival in the face of adversity.

The world’s top social media platforms have supported the WJC effort, including  Facebook/Instagram/Meta, Twitter and TikTok. In 2021, #WeRemember was one of the most-discussed topics online. Last year’s campaign also culminated with Facebook announcing that it would redirect users searching the term “Holocaust” to the website AboutHolocaust.org, developed by World Jewish Congress in partnership with UNESCO as a comprehensive resource about the history of the Holocaust and its legacy.