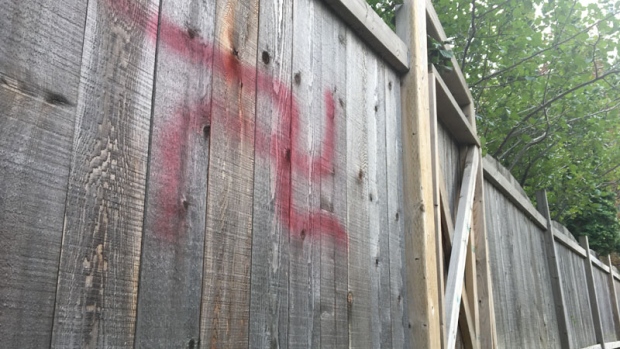 (Edmonton) – The Edmonton Police Service is investigating several incidents of swastika graffiti being painted at multiple locations throughout the southwest neighbourhood of Lessard and including on the playground of Talmud Torah School.

Southwest Division patrol members were first dispatched to three residential addresses in the neighbourhood of Lessard at around 12 p.m. on Friday, Aug. 3, 2018. Upon arrival, officers discovered three red swastikas painted on a rear residential driveway near 172 Street and 57 Avenue.

The adjacent residence to the north had the numbers “780” painted in blue on a rear fence.

Officers were also dispatched to the rear of a residence on Lessard Drive, where they discovered another red swastika painted on a residential fence.

Southwest Division patrol members also responded to an ETS bus stop near 57 Avenue and 174 Street, after receiving reports of another swastika being painted on the transit stop.

Members then responded to the Talmud Torah School playground, after receiving complaints regarding a red swastika being painted on the school’s basketball court.

Investigators believe the incidents occurred early Thursday morning. Officers have since spoken with residents throughout the Lessard neighbourhood, and continue to seek surveillance video that could help to identify the suspect(s).

Southwest Division members continue to investigate the swastika incidents, in consultation with the EPS Hate Crimes Unit. There is no further information available at this time.

City Councilor Sarah Hamilton stated that “among the crude and reprehensible damage to the community league and public property were spray painted swastikas, as well as racial and homophobic slurs.”

“These displays do not belong in our City and I want to condemn, in the strongest possible terms, any expression of hatred and bigotry,” she stated on twitter. “There is no place in our City for hatred and intolerance. No matter what language we speak, where we were born or what we believe, we all want the same things for ourselves and our families.”

The Edmonton Police Service Hate Crime and Violent Extremism Unit is looking into the incident.

“As we await their findings, let us all ensure that we continue to foster a community built upon the principles of respect and understanding, such that this repugnant and isolated display remain an outlier,” concluded Hamilton.