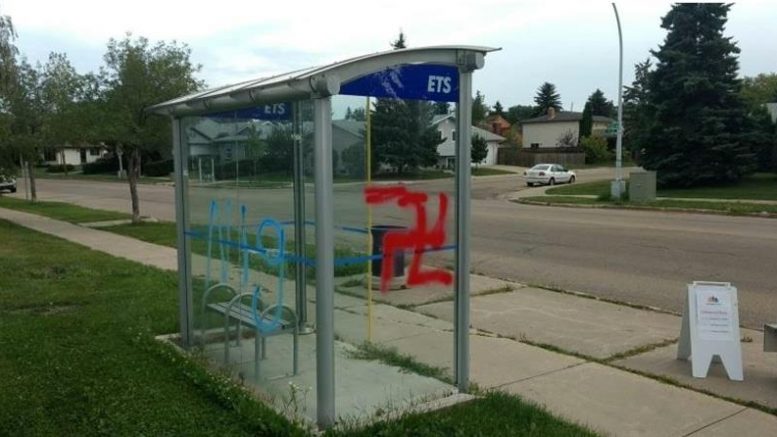 Hateful graffiti marked multiple locations in SW Edmonton in the summer of 2018 including the basketball court at Talmud Torah School. (Photo supplied by a neighbour to CBC).

EDMONTON, AB – In response to the discovery of hateful vandalism in several locations, including outside Talmud Torah school, Steven Shafir, President of the Jewish Federation of Edmonton and member of the Board of the Centre for Israel and Jewish Affairs, issued the following:

“Our community was shocked and deeply disturbed when we learned that a swastika was painted on the property of the Talmud Torah School. Sadly, this is yet another attack on Canada’s Jewish community, which remains the most frequently-targeted religious minority group in Canada, year after year.

On this Heritage Day long weekend, where Albertans are celebrating the diversity of our province and country, this recent incident flies in the face of our core Canadian values including acceptance of all people, regardless of who they are.

This latest display of ignorance and hate has raised alarms within our community. We will work closely with local government officials and the professionals within the Edmonton Police Service’s Hate Crimes unit to ensure that Jewish Canadians – and our institutions – remain safe.

Should anyone have any information regarding this incident or any others, we urge you to contact law enforcement directly.”

The Centre for Israel and Jewish Affairs (CIJA) is the advocacy agent of the Jewish Federations of Canada-UIA.