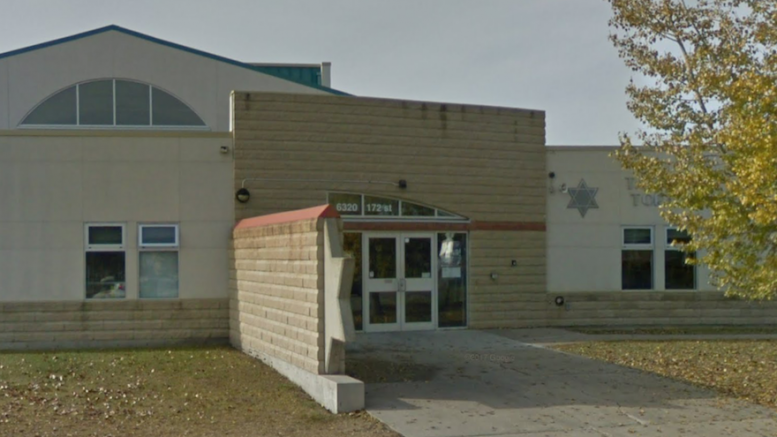 The Edmonton Talmud Torah Society AGM will be held by ZOOM on August 12, 2020.

(August 7, 2018) – Edmontonians are encouraged to attend an outdoor solidarity rally tonight at Talmud Torah School at 6 pm to protest a spree of swastika graffiti that peppered the Lessard community.

On Friday August 3, Edmonton police were called to investigate multiple red painted swastikas that appeared in and around the Callingwood South and Gariepy neighbourhoods, including a bus stop, three on a single residential driveway, another on a residential fence, one at a bus stop and one on the basketball court of the Talmud Torah School playground.

It is believed that the vandalism occurred on Thursday August 2.

The letter read, “You may have heard by now that there were numerous swastikas spray painted in the Talmud Torah neighbourhood Thursday night including on our basketball court. These incidents have been criticized by not only members of our community, but also our politicians including Councillor Sarah Hamilton, Mayor Don Iveson, MLA Lorne Dach, and MP Kelly McCauley.

“We are concerned about any anti-Semitic incidents that occur in our city and especially at our school. There is no place for anti-Semitism in our society and we welcome the unified response, including a rally being organized by our MLA Lorne Dach against anti-Semitism at the Talmud Torah building on Tuesday, August 7 at 6pm. We welcome all to the event to voice support.

“We take security of our school extremely seriously and are cooperating with the Edmonton Police Service and EPSB Security to provide support to the investigation.

“Even though Jews have been subject to anti-Semitic attacks since time immemorial, we have maintained our focus on Tikkun Olam, making our communities stronger, and giving our children a Jewish education.

“We encourage attendance at the rally on Tuesday.”

Earlier in the weekend, MLA Lorn Dach wrote, “I was appalled to hear about the cowardly and anti-Semitic acts of vandalism in our neighbourhoods of Callingwood South, Lessard and Gariepy.

“There is no place for these illegal and disturbing acts in our communities or anywhere else in Alberta. I, along with the vast majority of Albertans, strongly condemn these acts of hatred.

“I want to thank the residents who acted quickly to paint over the graffiti when it came to your attention.
To the communities and families affected by these horrible acts, please do not hesitate to contact me or my office with your questions and concerns. My staff and I will make sure you find the right supports and services to help you.”

MP Kelly McCauley remarked, “ I am appalled by this despicable act of racism, cowardice, and hatred. Our community deserves so much better, and I thank the residents who worked quickly to paint over this disgusting display of intolerance.”

Jewish Federation of Edmonton President Steven Shafir stated, “Our community was shocked and deeply disturbed when we learned that a swastika was painted on the property of the Talmud Torah School. Sadly, this is yet another attack on Canada’s Jewish community, which remains the most frequently-targeted religious minority group in Canada, year after year.

“On this Heritage Day long weekend, where Albertans are celebrating the diversity of our province and country, this recent incident flies in the face of our core Canadian values including acceptance of all people, regardless of who they are.

“This latest display of ignorance and hate has raised alarms within our community. We will work closely with local government officials and the professionals within the Edmonton Police Service’s Hate Crimes unit to ensure that Jewish Canadians – and our institutions – remain safe.”

City Councilor Sarah Hamilton stated that “among the crude and reprehensible damage to the community league and public property were spray painted swastikas, as well as racial and homophobic slurs.”

“These displays do not belong in our City and I want to condemn, in the strongest possible terms, any expression of hatred and bigotry,” she stated on twitter. “There is no place in our City for hatred and intolerance. No matter what language we speak, where we were born or what we believe, we all want the same things for ourselves and our families.”

The Edmonton Police Service Hate Crime and Violent Extremism Unit is looking into the incident.

“As we await their findings, let us all ensure that we continue to foster a community built upon the principles of respect and understanding, such that this repugnant and isolated display remain an outlier,” concluded Hamilton.