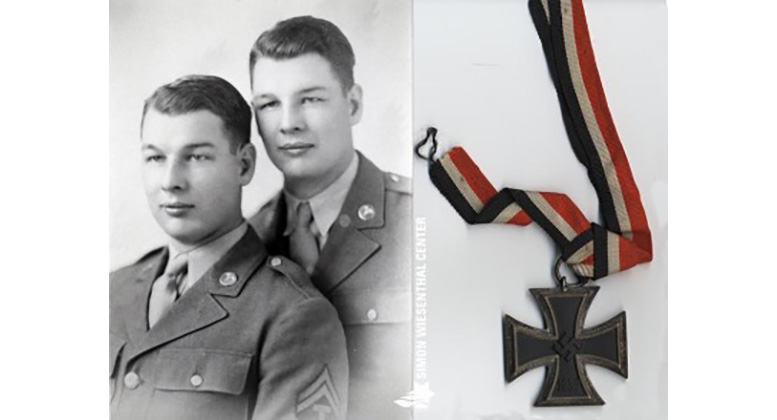 Pictured above in 1942: Native Americans Bennett Freeny (L) and his identical twin brother Benjamin (R) were born on January 21, 1922 in Caddo, Oklahoma. The Freeny family is of Chickasaw and Choctaw descent. (Photo and Iron Cross are part of Simon Weisenthal Center's Archival Holdings).

(April 27, 2021)  –  In commemoration of the 76th anniversary of the liberation of the Dachau Concentration Camp by American soldiers, the Simon Wiesenthal Center Archives is highlighting the amazing story of two Native American soldiers – twin brothers – and how one brother helped liberate hundreds of prisoners.

Native Americans Bennett Freeny and his identical twin brother Benjamin were born on January 21, 1922 in Caddo, Oklahoma. The Freeny family is of Chickasaw and Choctaw descent.

The Freeny brothers entered the US Army in 1940 as combat medics with the 45th Infantry Division. Organized in 1923 as the National Guard for Oklahoma, Arizona, Colorado, and New Mexico, the Division was activated for federal service in September of 1940. By 1943, when they set sail for the European Theater, the 45th, also known as the Thunderbird Division, consisted of 14,500 troops, including over 1,500 Native Americans. Between 1943 and 1944, the Thunderbirds fought battles in North Africa, Italy, and France.

In 1945, the Division entered Germany, where they captured the cities of Nuremberg and Munich. Bennett Freeny was part of one of the first units to enter Dachau Concentration Camp on April 29, 1945, where they helped liberate tens of thousands of prisoners.

“… Bennett and I were both medics with the 45th and we encountered a great many prisoners who had contracted Typhoid and other ailments, and even more who had been starved … We were very disheartened by the condition of these poor souls and still enraged by the evil and carnage we had encountered liberating the camp.

A German SS officer walked through as though still in command and eyed us arrogantly and with a sort of sneer. Your dad stood, walked up to him and pulled out his knife. A couple of our boys stood by and prevented the officer from moving. Your father, one at a time, cut his medals and insignias off his uniform – Death Head, Edelweiss insignia, various patches and came to the Iron Cross hanging around his neck. Bennett grabbed it, cut the ribbon, and said ‘this is the sign of a hero – there are no heroes here’ and stuffed all the medals and patches in his pocket. A few of the prisoners who were able, clapped.

We were young men who had a lifetime of horror and violence visited upon us by age 23. None of us would ever be the same, but that day your father was bigger than life…”

The Simon Wiesenthal Center is an international Jewish human rights organization numbering over 400.000 members. It holds consultative status at the United Nations, UNESCO, the OSCE, the Council of Europe, the OAS and the Latin American Parliament (PARLATINO).