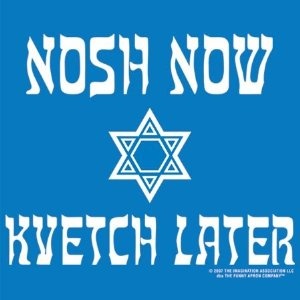 (EJNews) – This was sent to me by a friend and it put a smile on my face so I am sharing it with all our Edmonton Jewish News readers. If you know the writer, send it to me because I’d love to read more!

This goes back 2 generations, 3 if you are over 50. It also explains why many Jewish men died in their early 60′s with a non-functional cardiovascular system and looked like today’s men at 89.

Before we start, there are some variations in ingredients because of the various types of Jewish taste (Polack, Litvack, Deutch and Gallicianer). Sephardic is for another time.
Just as we Jews have six seasons of the year (winter, spring, summer, autumn, the slack season, and the busy season), we all focus on a main ingredient which, unfortunately and undeservedly, has disappeared from our diet. I’m talking, of course, about SCHMALTZ (chicken fat).

SCHMALTZ has, for centuries, been the prime ingredient in almost every Jewish dish, and I feel it’s time to revive it to its rightful place in our homes. (I have plans to distribute it in a green glass Gucci bottle with a label clearly saying: “low fat, no cholesterol, Newman’s Choice, extra virgin SCHMALTZ.” (It can’t miss!)  Then there are grebenes – pieces of chicken skin, deep fried in SCHMALTZ, onions and salt until crispy brown (Jewish bacon).  This makes a great appetizer for the next cardiologist’s convention.

There’s also a nice chicken fricassee (stew) using the heart, gorgle (neck) pipick (gizzard – a great delicacy, given to the favorite child), a fleegle (wing) or two, some ayelech (little premature eggs) and other various chicken innards, in a broth of SCHMALTZ, water, paprika, etc. We also have knishes (filled dough) and the eternal question, “Will that be liver, beef or potatoes, or all three?”

Other time-tested favorites are kishkeh, and its poor cousin, helzel (chicken or goose neck). Kishkeh is the gut of the cow, bought by the foot at the Kosher butcher. It is turned inside out, scalded and scraped. One end is sewn up and a mixture of flour, SCHMALTZ, onions, eggs, salt, pepper, etc., is spooned into the open end and squished down until it is full. The other end is sewn and the whole thing is boiled. Often, after boiling, it is browned in the oven so the skin becomes crispy. Yummy!

For our next course we always had chicken soup with pieces of yellow-white, rubbery chicken skin floating in a greasy sea of lokshen (noodles), farfel (broken bits of matzah), tzibbeles (onions), mondlech (soup nuts), kneidlach (dumplings), kasha (groats), kliskelech and marech (marrow bones). The main course, as I recall, was either boiled chicken, flanken, kackletten, hockfleish (chopped meat), and sometimes rib steaks, which were served either well-done, burned or cremated. Occasionally we had barbecued liver done to a burned and hardened perfection in our own coal furnace.

Since we couldn’t have milk with our meat meals, beverages consisted of cheap soda (Kik, Dominion Dry, seltzer in the spritz bottles).  In Philadelphia it was usually Franks Black Cherry or, in New York it Myer’s 1890 Black Cherry or Raspberry.

If you are Jewish, and grew up in city with a large Jewish population, the following will invoke heartfelt memories.

The Yiddish word for today is PULKES (PUHL-kees). Translation: THIGHS.

Please note: this word has been traced back to the language of one of the original Tribes of Israel, the Cellulites.

The only good advice that your Jewish mother gave you was: “Go! You might meet somebody!”

You grew up thinking it was normal for someone to shout “Are you okay?” through the bathroom door when you were in there longer than 3 minutes.

Your family dog responded to commands in Yiddish.

Every Saturday morning your father went to the neighborhood deli (called an “appetitizing store”) for whitefish salad, whitefish “chubs”, lox (nova if you were rich!), herring, corned beef, roast beef, coleslaw, potato salad, a 1/2-dozen huge barrel pickles which you reached into the brine for, a dozen assorted bagels, cream cheese and rye bread (sliced while he waited). All of which would be strictly off-limits until Sunday morning.

Every Sunday afternoon was spent visiting your grandparents and/or other relatives. You experienced the phenomenon of 50 people fitting into a 10-foot-wide dining room hitting each other with plastic plates trying to get to a deli tray.

You had at least one female relative who penciled on eyebrows which were always asymmetrical.

You never knew anyone whose last name didn’t end in one of 5 standard suffixes (berg, baum, man, stein and witz).

You were surprised to discover that wine doesn’t always taste like cranberry sauce.

You can look at gefilte fish and not turn green.

When your mother smacked you really hard, she continued to make you feel bad for hurting her hand.

You can understand Yiddish but you can’t speak it. You know how to pronounce numerous Yiddish words and use them correctly in context, yet you don’t know exactly what they mean. Kaynahurra.

You’re still angry at your parents for not speaking both Yiddish and English to you when you were a baby.

You have at least one ancestor who is somehow related to your spouse’s ancestor.

You thought speaking loud was normal.

You considered your Bar or Bat Mitzvah a “Get Out of Hebrew School Free” card.

You think eating half a jar of dill pickles is a wholesome snack.

You buy 3 shopping bags worth of hot bagels on every trip back to your hometown and carefully shlep them home like glassware.

Your mother or grandmother took personal pride when a Jew was noted for some accomplishment (showbiz, medicine, politics, etc.) and was ashamed and embarrassed when a Jew was accused of a crime as if they were relatives.

You thought only non-Jews went to sleep away colleges. Jews went to city schools… unless they had scholarships or made an Ivy League school.

And finally, you knew that Sunday night and the night after any Jewish holiday was designated for Chinese food.