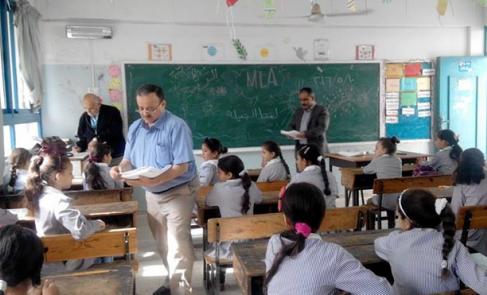 Ottawa announced on November 16 that it was providing $20 million to UNRWA to support education, health and social services “for millions of vulnerable Palestinian refugees.” Also, it committed $5 million to the agency’s emergency appeal for Palestinian refugees affected by the crisis in Syria and surrounding areas, according to a statement from the office of Marie-Claude Bibeau, minister of international development.

Canada’s previous Conservative government cut funding to UNRWA gradually. By 2013 and 2014, Ottawa’s allocation was zero. Canada became the only donor nation ever to withdraw funding completely.

Leading Jewish organizations applauded the cuts at the time.

The reinstated funding “will help approximately 5.5 million Palestinian refugees — particularly women and children — receive the assistance they need, including access to health care and the opportunity to go to school,” according to Ottawa’s statement.

“We want to see Palestinian refugee children in classrooms where they can learn universal values of tolerance and respect,” Bibeau said. “Vulnerable Palestinians deserve all the opportunities they can to contribute positively to their communities, and Canada’s funding will help to better the lives of millions of refugees.”

The Centre for Israel and Jewish Affairs said it continues to have “serious reservations about UNRWA, an organization that is implicated with assisting terrorist groups such as Hamas,” which is “notorious for diverting funds and materials provided by the international community intended for humanitarian aid to terrorist purposes.”

Donors “have a responsibility to ensure that aid is used for the purpose for which it is given, and we are pleased Canada has taken the lead in establishing a robust accountability protocol,” CIJA said.

B’nai Brith Canada is outraged that the Government of Canada has committed $25-million in funding to the United Nations Relief and Works Agency for Palestine Refugees (UNRWA) – an organization previously criticized for its ties to the Hamas terrorist organization – without addressing the agency’s long history of incitement.

“UNRWA has a track record of problematic behaviour that can be clearly construed as collaborating with Hamas and indoctrinating Palestinian youth to believe that violent struggle takes precedence over establishing peace,” said Michael Mostyn, Chief Executive Officer of B’nai Brith Canada.

While the Government acknowledges that “serious concerns” have been raised in regards to UNRWA and that it will take “appropriate measures” and offer social-media training to staff members to address issues such as neutrality, B’nai Brith is seeking evidence that UNRWA, an agency that has repeatedly proven itself untrustworthy, has learned from its previous wrongdoings.

A recent analysis of Palestinian textbooks distributed to students attending UNRWA schools confirms that Jews are consistently “portrayed in a negative manner” and often demonized. The text also perpetuates the libel that Jews are “occupying” Palestinian land and have no historical ties to the State of Israel.

In 2014, the UN confirmed that weapons and ammunition were being stored in UNRWA schools. Last year, UNRWA had to discipline at least 22 employees for sharing content to social media that celebrated terrorism and glorified martyrdom.

As a leading human rights organization, B’nai Brith believes that providing humanitarian aid to refugees in dire living conditions is of the utmost importance. However, Canadians demand that the Government be accountable for its spending.

“To turn over $25 million in aid to an agency that has supported the Palestinian Authority’s sustained campaign to rewrite Judeo-Christian history, incite violence, and delegitimize the state of Israel is an insult to Canadian taxpayers,” added Mostyn. “While the Government is introducing anti-terrorism provisions, which is commendable, there is no mention of preventing indoctrination and incitement, which frequently leads to violence. Incitement has been one of the primary complaints the world has had in regards to UNRWA, and it has not been addressed in this announcement.

“Until we are certain that UNRWA is operating at a standard in line with Canadian values and expectations as it relates to human rights, we should not be providing this organization with taxpayer-funded dollars.