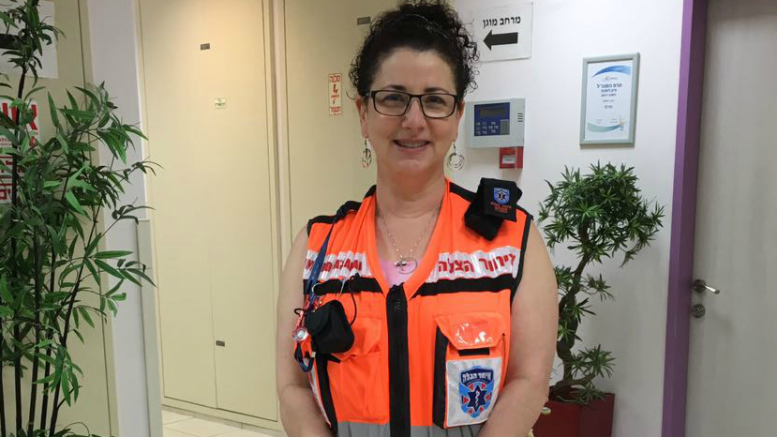 Edmontonian Melanie Berkowitz, is trained to use her defibrillator that she received from United Hatzalah

Jerusalem, November 15th, 2016 – Among the many Canadians who have decided to make Israel their home, more than a few have continued the fulfillment of their Zionist dream by volunteering to save lives in Israel each and every day. Coming from a wide variety of backgrounds and living very different lifestyles in Israel, these heroes share the same values and are all part of Israel’s national volunteer emergency medical services (EMS) organization, United Hatzalah.

Nachum Shore originally hails from Toronto, and now calls Neve Yaakov his home. He lives there with his wife and five children and has been volunteering as an EMT for four years. He first thought about volunteering when he saw an EMT course being offered in English. He decided to register for the course so that he could become a volunteer for his community upon the course’s completion. “It was the first course of its kind, being in English. I thought that it would be interesting to take the course, learn the information and volunteer in my community.”

Upon their completion of an EMT course and subsequent in-field training, United Hatzalah volunteers are given medical kits that they carry with them in order to respond to medical emergencies nearby. The kits contain advanced medical equipment that enables them to treat patients on site, while waiting for ambulances to arrive, thereby cutting down EMS response time. By using NowForce technology, an app akin to Uber for EMS, the national dispatch center located in Jerusalem can locate the volunteers closest to any medical emergency and dispatch them to the scene. The model of using community-based volunteers, together with the advanced technology and portable equipment, has enabled the organization to cut down EMS response time to a national average of 3 minutes. Treating patients in the field while waiting for the ambulance to arrive saves precious minutes, which in the world of EMS can often make the difference between life and death.

On average Nachum responds to one call a day, often while he is at work. “I paint houses, and if I am working in my community of Neve Yaakov, then it is important that I respond, as it often takes ambulances a long time to get to us,” said the former congregant of the B’Nai Torah synagogue in Toronto. “In order to avoid excessive desecration of Shabbat the team in Neve Yaakov divides up the workload and takes turns being on call,” [Office1] Shore explained. “After a while, you get used to all of the calls and they tend to blend together in your mind, but you know that you are doing a good thing when your family supports you and you are saving lives. Even my children let me know that a call has come in on my MIRS phone if it is in another room when it goes off. Saving lives is a serious business, and each call may be a life-threatening situation.”

Being from Canada, Nachum was unfazed when a call came in during a snowfall. After treating a patient nearby his house and transporting him to the ambulance, the ambulance driver got stuck in the snow and was unable to drive the patient to the hospital. Recognizing that precious moments were being lost, Nachum told the ambulance driver that he had experience driving in the snow and took over. He quickly maneuvered the vehicle out of the heavily snowed-in area and onto a major thoroughfare, allowing the driver to take over once it was safe.

Another volunteer, Danny Gur, lived in Vancouver before moving to Israel. While his family was originally from Montreal, they moved to Vancouver before Danny was born. He now resides in Alon Shvut and spends a lot of his day driving as part of his job. While driving Danny comes across car accidents fairly frequently. “I decided that I didn’t simply want to sit in traffic or drive by an accident, I wanted to help. I took a course to be an EMT and with United Hatzalah’s dispatch technology, I am notified about accidents and people in need all around me. Once, while driving through the Gilo Tunnels, I was notified that a car accident had occurred near my location. When I arrived, there was no accident and I told the dispatch that it was a false alarm. About two minutes later they called me back and asked me to respond to a man who had suddenly collapsed right near my location. I rushed over and began CPR and was successful in saving his life.”

For Gur, these calls often occur in quick succession.  “I recall one time while driving back home from Rosh Ha’ayin, I was involved in helping people in four different accidents along the way. A 45-minute drive turned into three hours. But since I was less than a minute away from each call, my quick response time saved lives.”

Gur who is married with one daughter said “each time I meet a patient who I have treated, and they look happy and healthy, it gives me the strength to keep going and continue helping people.”

A third Canadian, Melanie Berkowitz, who called Edmonton home, made aliyah over 30 years ago and has been working as a nurse. The 3rd generation Albertan recently became a grandmother and lives in Mazkeret Batya, near Rehovot. She began her journey with United Hatzalah after hearing of two cases that occurred in her town where people died while waiting for an ambulance to arrive. “Here it takes about 20 minutes for an ambulance to get to us, and I thought it was ridiculous that there are all these people around who are trained medical professionals, who could help, but simply didn’t know about the incidents or didn’t have the equipment to do anything. These deaths occurred simply because people couldn’t be reached in time and that is ridiculous. The medical organization Klalit put out a call asking for volunteers who wanted to be trained as an emergency EMT with United Hatzalah and I joined up knowing nothing about the organization beforehand.”

Upon arrival, Melanie had second thoughts. “The people who showed up were mainly ultra-Orthodox and men. But over the past few years, the organization has opened its doors to volunteers from all over Israel and from all different walks of life. I haven’t been treated any differently or felt any awkwardness during my time with the organization and we now have our own team in Mazkeret Batya. The organization gave me my own defibrillator which will often make the difference between life and death.”

Melanie said that her family is very proud of her volunteering and is incredibly supportive, “even though being on call 24 hours a day has messed up a few cakes that I made for them.”

“I think that the principle of community-based first response is something that is very similar to making aliyah,” said Melanie. “You are taking on something bigger than yourself and it brings out the best in you in spite of the tough situation. The best part of mankind is that people from different communities, men, women, religious, Haredi, secular, and even Arab volunteers, join together for the single purpose of saving lives in Israel. That means a tremendous amount to me, and it helps me make Israel a better place every day.”

United Hatzalah handles more than 700 emergency calls daily and has an average response time of under three minutes across the nation. In large urban areas such as Jerusalem and metropolitan Tel Aviv, the organization’s average response time is under 90 seconds, largely in part due to the dedication of volunteers like these and the use of high-speed ambucycles that can weave through traffic unlike larger vehicles. Nachum, Danny, and Melanie are just three of the 3,000 volunteers who work with United Hatzalah to save lives in Israel each and every day.