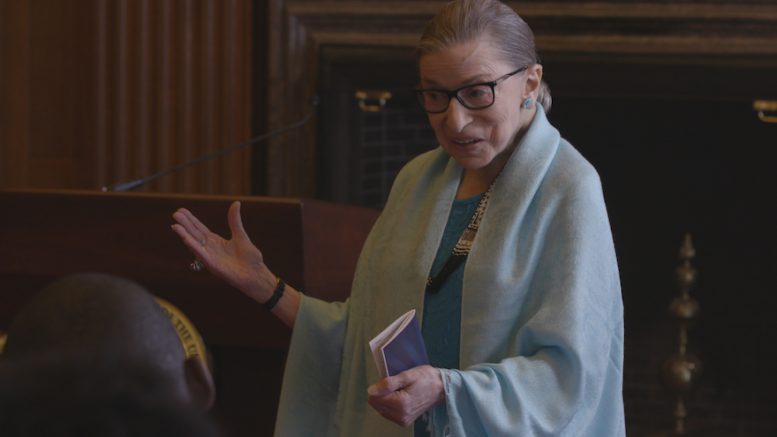 NEW YORK (JTA) — One of the first scenes in a new documentary about Ruth Bader Ginsburg features the Supreme Court associate justice, then 84, vigorously lifting weights, doing leg exercises and holding herself in a plank position. The much buzzed-about workout routine has only added to her status as a cultural icon among young progressives.

Though Ginsburg joined the Supreme Court in 1993, becoming the second female justice on the high court, she attained pop culture icon status in the last decade as her dissents made her a loud liberal voice on an increasingly right-leaning court. Fans have given Ginsburg, now 85, the nickname “Notorious R.B.G.” (a riff on the late rapper Notorious B.I.G.), memes of her have gone viral and “Saturday Night Live” has done sketches about her.

“RBG” producers Julie Cohen, 54, and Betsy West, 66, decided to make a documentary about the Jewish jurist’s life for that very reason, they told JTA in a phone interview earlier this month.

“We felt that Justice Ginsburg had a lot of fans, many younger millennial fans, and many of them really didn’t know her extraordinary story and the role she played in winning rights for women,” West said.

The film, which opens Friday in theaters, shows both the Brooklyn native’s professional accomplishments and provides insight into her personal life, such as her twice-weekly workout. Shooting that scene presented its challenges, Cohen said.

“There is all this equipment around, and there are mirrors all around,” she recalled. “Really for the logistics of the shoot it probably would have been better for us not to be in the room, but there was no way that Betsy and I were going to miss being in that room.”

The New York-based pair had filmed Ginsburg previously — West for a project called MAKERS that spotlighted important American women, and Cohen for “The Sturgeon Queens,” a documentary about the iconic New York deli Russ and Daughters, a favorite of Ginsburg’s. Still, Ginsburg was not sold on the idea.

“Her initial answer essentially was not yes,” Cohen said.

But they persevered and came back to Ginsburg with a plan of action of whom they would interview for the film. A few months later she agreed to do an interview — in two years.

In 2016, with the participation of CNN Films and Storyville Films, Cohen and West started interviewing friends, relatives and others who know her, including former President Bill Clinton, who nominated her to the Supreme Court, and feminist icon Gloria Steinem.

The documentary chronicles Ginsburg’s journey to the Supreme Court, from enrolling in Harvard Law School in 1956 — one of only nine women in a class of over 500 — to not being able to get a job at a New York law firm due to her gender. It shows how she became a trailblazer in the fight for women’s equality as co-founder of the Women’s Rights Project at the American Civil Liberties Union, arguing cases to end gender discrimination, including six in front of the Supreme Court.

Interspersed with her career milestones are interviews that shed light on other aspects of her life.

The film does not focus on Ginsburg’s Jewish background, though it does not shy away from it. It includes the story of Ginsburg’s Odessa-born grandfather, who faced anti-Semitism in his native Ukraine, and features her granddaughter, Clara Spera, explaining the meaning of “bubbe,” the Yiddish term for grandmother.

Judaism “seems to be an undercurrent in her life, [but it’s] something that we didn’t deal with overtly” in the film, West said.

Cohen said that one challenge facing the filmmakers was getting Ginsburg to open up.

“Put her in front of crowd of a thousand people and she’s quite an amazing public speaker,” she said, “but in a quieter situation you have to draw her out.”

Though the pair worried about what Ginsburg would think of the final product, the justice told them after a screening at the Sundance Festival that she was happy with how it turned out.

“She said that it exceeded all expectations and she thought it was a beautiful rendering of her life,” Cohen said.

West said that Ginsburg’s career, fighting for women’s equality at a time when that was considered rebellious, is especially relevant today.

“At a time of #MeToo and Time’s Up and a new consideration of discrimination that women continue to face,” she said, “it is inspiring and perhaps instructive to take a look at the way Justice Ginsburg faced even tougher battles.”