(EJNews) – The 22nd annual Edmonton Jewish Film Festival (EJFF) kicks off on Sunday May 6 at Landmark Cinemas 9 at City Centre and it is sure to be a wonderful event of Jewish themed films from around the world. The Festival has grown from a small community program to a first-class Jewish cultural event.

“The EJFF is our opportunity to share our culture, history and identity with each other and with the greater Edmonton community through film,” stated Steven Shafir, president of the Jewish Federation of Edmonton who presents the annual event.

“As in past years, we offer you a rich and diverse selection of outstanding comedies, dramas and documentaries from around the world.”

With 10 feature films screened over 6 days, the EJFF will be presenting a wide variety of films that will make you laugh, cry and keep you on the edge of your seat. 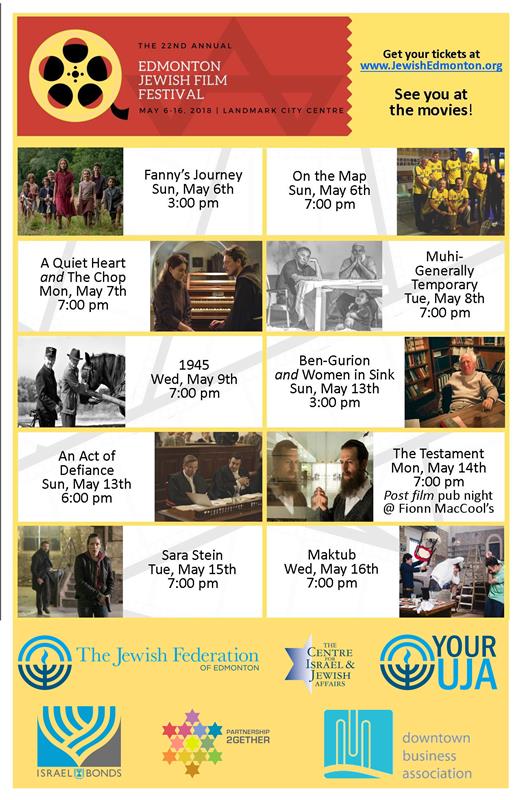 The Festival opens with a 3 pm matinee on May 6 entitled ‘Fanny’s Journey.’ Susan Schiffman, director of development for the Jewish Federation of Edmonton and coordinator of the fest, calls it “sweet and heartwarming, based on a true story of French Jewish children who escape pretty much on their own from the Nazis. It’s really about the courage and vibrancy of children.”

Opening night, Sunday, celebrates Israel’s 70th anniversary with the Israeli film ‘On the Map’ and an Israel-themed cocktail party beforehand.

The film, directed by Dani Menkin is an action packed, against-the-odds story about the 1977 Maccabi Basketball Team that came from nothing and had to battle anti-Semitism to become European Champions.  Schiffman describes it as “a David and Goliath story – a really good underdog story set during the Cold War.”

A modern Maccabi team basketball will be auctioned off after the film, added Schiffman.

The third-annual Earl Parker Award for Jewish Film will also be given out opening night. The two previous winners are Edmonton’s Adam Bentley and Gregg Silver, though the prize is open to filmmakers (including school groups) across the country, so long as the work has a connection to Jewish culture. Silver’s short ‘Souls on One Foot’ will also show at the opening-night event.

The sponsor for the opening night event is ORT Canada. ORT is one of ten major sponsors of the title films. Other sponsors include the Aviv Israeli Folk Dance Association, Friends of the Gallilee Panhandle, JAHSENA, Canadian Hadassah-Wizo and Servus Credit Union as well as some generous members of the Edmonton Jewish Community.

The sponsor for Sunday’s matinee is the Nolan family and friends, in loving memory of Carla Nolan z’l who passed away in Toronto last year after a courageous battle with cancer and Crohn’s disease. Born in Edmonton in 1957 to Ruth and Harry Nolan, Carla attended Talmud Torah School and was a beloved member of the Edmonton Jewish Community.

Carla loved theatre and film and graduated from University of Alberta with a BA Honours (Drama). In Edmonton, Carla was active in Young Judea and Israeli dancing. She worked for Alberta Culture as well as Women Against Violence Against Women. After moving to Toronto in 1988, Carla became one of the first employees of YTV. She was active in Toronto Women in Film and Television. She had an amazing sense of humour and founded the World of Comedy International Film Festival.

She remained optimistic and filled with love and humour throughout her life and she is dearly missed by family and friends. In addition to ‘Fanny’s Journey’ which is the story on a young girl’s courage in the face of unbelievable adversity, the family of friends of Carla Nolan also sponsored the short film ‘The Chop’ which will be screened on Monday May 7. It is a comedy about a charismatic Kosher butcher who loses his job, cannot find work at other Kosher butchers, and therefore decides to pretend to be Muslim in order to get work at a Halal butcher shop.

On Monday May 7 the feature film will be ‘A Quiet Heart’ at 7 pm followed by ‘The Chop.’ Taking place in modern Israel, ‘A Quiet Heart’ tells the story of a secular concert pianist who adjusts to life in Jerusalem after living in Tel Aviv.

On Tuesday May 8 at 7 pm ‘Muhi – Generally Temporary’ will be screened. This documentary film is in Hebrew with English subtitles and it tells the inspirational story of the struggles and challenges of a Palestinian child who lives in an Israeli hospital with his grandfather.

On Wednesday May 9, at 7 pm the EJFF will feature the Hungarian film ‘1945.’ The film, which is in Hungarian with English subtitles, tells the story of two men who go back to their village after the war, and are met with fear and trepidation.  A superb cast, lustrous black and white cinematography and historically detailed art direction contribute to this eloquent drama.

We’ll give you a run down on the second block of films which screen from May 13- 16 later this week. Some bonus highlights include a Q & A with South African members of our community on May 13 following the screening of ‘An Act of Defiance.’ These individuals witnessed the events portrayed in the film which takes place in 1963 and covers the arrests and court case of Nelson Mandala and nine other activists.

A special event will also be held following the screening of ‘The Testament’ on May 14. The film is centred on a Holocaust researcher who uncovers some startling information about a massacre in a Polish town during the war.   A casual evening for drinks, snacks and to chat about the film with Dr. Joseph Patrouch, Director of the University of Alberta’s Wirth Institute will be held nearby at Fionn MacCool’s Pub.

A complete schedule is available at Jewishedmonton.org including trailers and synopses of all the films.

The Edmonton Jewish Film Festival is a fundraiser for Partnership2Gether – an educational exchange program between students and teachers in Edmonton with students and teachers from the Gallee Panhandle in northern Israel. In addition to the Jewish Federation of Edmonton, sponsors for the EJFF include the Centre for Israel and Jewish Affairs, the Edmonton United Jewish Appeal, Israel Bonds, Partnership 2Gether and the Edmonton Downtown Business Association.

Tickets for the films are $12 per film or $100 for a festival pass. Click here for more information and to purchase tickets.

Be the first to comment on "Edmonton Jewish Film Festival starts this Sunday – Don’t miss out!"