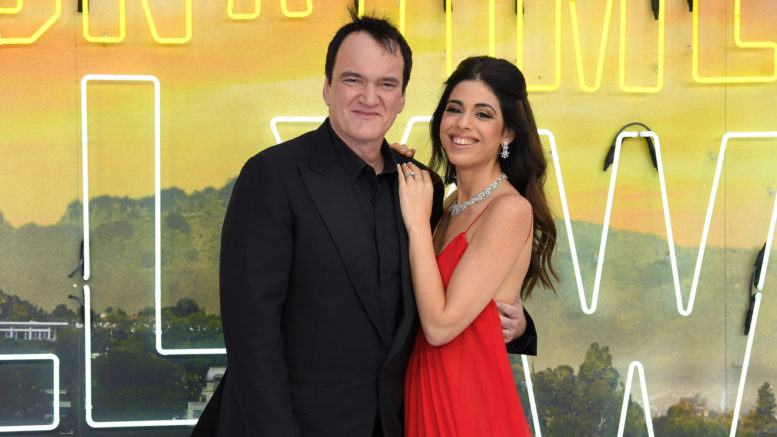 Quentin Tarantino and Daniella Pick attend the "Once Upon a Time ... In Hollywood" premiere in London, July 30, 2019. (Karwai Tang/WireImage/Getty Images)

(JTA) — Yes, Quentin Tarantino is learning Hebrew — at the same speed as his toddler.

The famed non-Jewish American director, who has been married to Israeli singer and actress Daniella Pick since 2018, opened up Tuesday night on “Jimmy Kimmel Live!” about his new life in Israel, which included a longer-than-expected stint in Tel Aviv during the COVID-19 pandemic.

Tarantino added that he has learned several words in Hebrew, but not enough to hold a conversation. He watches baby shows in Hebrew with his son, especially one he compared to a “Hebrew version of ‘Sesame Street,’” through which he’s broadening his Hebrew vocabulary.

Kimmel asked how his 15-month-old son, Leo (not named for a certain famous actor), was doing, and Tarantino said he can only say one word: “abba,” Hebrew for “dad.”

“And a third of the time he means me,” Tarantino quipped.

Be the first to comment on "Quentin Tarantino opens up about learning Hebrew, his life in Tel Aviv and being an ‘abba’"