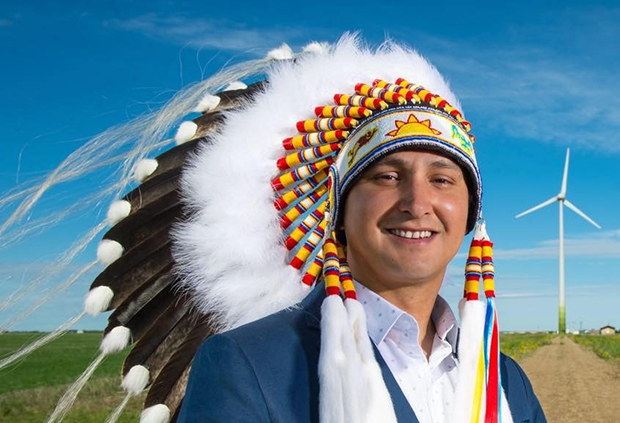 (June 27, 2021) – An extremely gracious and thoughtful response from Cowessess First Nation Chief Cadmus Delorme on The National last night, when CBC host Ian Hanomansing asked what his message is to Canadians:

“From a First Nation perspective, I love living in Canada. I went to university, I grew up on Cowessess, I have the best job I think I ever wanted, being chief. It’s not an easy task. But there is an accidental racism and ignorance in this country when it comes to history. You know, Indigenous people – and I’m speaking from Cowessess perspective – we don’t want to live in our current state. We want to be part of the economy. We want to be part of the growth… the social lives.

“Sometimes in this country, being Indigenous, it’s as if you gotta prove yourself a little more. You’re so used seeing maybe, someone asking for change and being Indigenous… you know, there’s a story behind every one, of the history that we inherited. So my comment to everybody listening is, from Cowessess, we’re not asking for pity. We’re asking for understanding. We’re asking that you stand beside us, that as we are gaining our control again – as Indigenous people – in our Treaty relationship, that we have better understanding. That our kids going to school understand the impact that residential school made, but also even pre… what great economy Indigenous people had prior to Treaty. This country would be so much more well-off, when Indigenous ideology and understanding is welcomed in, and not just brought in on certain days of the year.

(On the debate over whether to cancel Canada Day)

“Over 100,000 residential school survivors told their story – including my parents – and they created the Truth and Reconciliation ‘Calls to Action.’ Bring that into your personal life, your social life, your business life. And read the Missing and Murdered Indigenous Women and Girls ‘Calls to Action.’ There’s 231 Calls to Action. If we can all own those a little bit in this country, in one generation we would overcome so many challenges today, that our next generation won’t inherit this. We will make them more as Dreamers.”

Click here to read the Truth and Reconciliation Commission of Canada: Calls to Action

Be the first to comment on "If you’re a proud Canadian, read the Truth & Reconciliation Calls to Action"