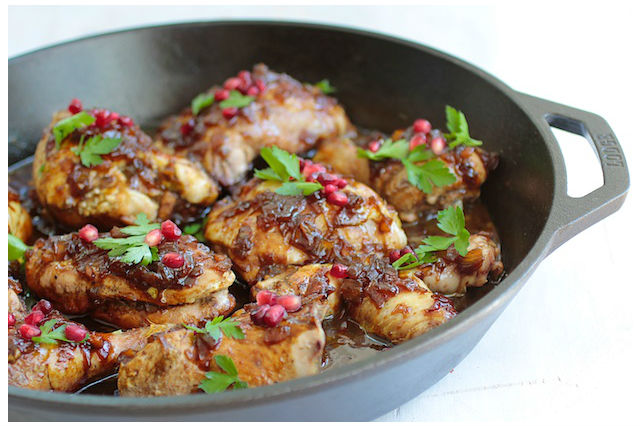 (The Nosher via JTA) — Pomegranates, or rimonim in Hebrew, are among the most recognizable and highly symbolic fruits in Jewish culture. Originating in Persia, these reddish, thick-skinned fruits (technically a berry) begin to appear in markets at the end of summer and are readily available for holiday cooking by Rosh Hashanah.

According to Gil Marks in “The Encyclopedia of Jewish Food,” the abundance of seeds, nestled into a white membrane and encased in a protective and leathery skin, is associated with the 613 commandments in the Torah. They serve as symbols of righteousness and fruitfulness,  as expressed in the Rosh Hashanah expression, “May we be full of merits like the pomegranate (is full of seeds).”

This ancient fruit, prized for its juice and seeds (called arils), is mentioned in the Bible as one  of the seven most bountiful agriculture products of ancient Israel. It is associated with fertility and sensuality, and is mentioned six times in the Song of Songs.

In biblical times, pomegranates were used to add tart flavors to ancient dishes before lemons and tomatoes were discovered. Since then, pomegranates have been used to add unique and complex dimensions to Sephardic and central Asian soups, stews, sauces, chutneys and desserts. They may be juiced, dried, reduced, ground or pressed into pomegranate oil.

Today, pomegranates are prized for their antioxidant and potent nutritional value, just as they were in ancient Egypt when the seeds were believed to heal intestinal disorders. Juice, molasses (actually a reduction and thickening of the juice and sometimes called pomegranate concentrate or syrup) and arils are used in a wide range of applications including cocktails, glazes, simmer sauces, and glistening toppings for green salads and vegetable dishes.

In “The New Persian Kitchen,” author Louisa Shafia offers numerous pomegranate dishes, including a classic Iranian stew called fesenjan that is often served at celebrations. The chicken is cooked with beets and thickened with coarsely ground walnuts and pomegranate molasses. As in many Persian dishes, pomegranate seeds are used as a glistening, jewel-like garnish.

Shafia illustrates removing the seeds a few different ways, but I like the “water method” best. Simply slice off the two ends and quarter the fruit with a knife. Submerge the quarters in a bowl of cold water and pull out the seeds with your fingers. The pith and skin float to the surface as the arils sink to the bottom. Scoop out everything but the seeds and pour water and seeds through a mesh colander to collect them.

Consider using pomegranates in your Rosh Hashanah meals when it is considered a positive omen, or segulah, to incorporate symbolic foods in our holiday menus. Whip up this easy chicken dish and you’ll have both bountiful and sweet symbols covered.

Holiday chicken is potent with pomegranates goodness as this symbolic fruit is used in three ways: juice, molasses and arils (seeds). The flavors are bold, tangy and  slightly sweet — a Middle Eastern-influenced sweet and sour.

Pomegranates are highly symbolic in Jewish tradition, most often associated with fertility and good deeds. By combining the tart flavors of pomegranates with honey here, the sweetness balances the tang and positive energy is imbued in this main course for Rosh Hashanah.

Note: The simmer sauce may be prepared two to three days ahead and refrigerated until ready to prepare the chicken.

Sauté chopped onion until soft and translucent. Add minced garlic and saute for 2-3 minutes (do not brown).

Stir and bring to boil. Reduce to an active simmer, and cook uncovered, for about 20 minutes or until sauce is reduced by about half the volume and slightly thickened.

Remove sauce from heat and pour into bowl. Set aside.

Heat remaining 2 tablespoons of oil in pan and place chicken parts skin side down. Brown on one side and flip to second side. Do not crowd chicken in the pan, as this causes chicken to steam rather than brown.

Remove from pan and platter, garnishing with chopped parsley and pomegranate arils.

(Liz Rueven’s blog, Kosher Like Me, features restaurant and product reviews, tips on events where like-minded eaters like her can actually eat, and news about folks in the food world.)

Be the first to comment on "Pomegranate and Honey Glazed Chicken"