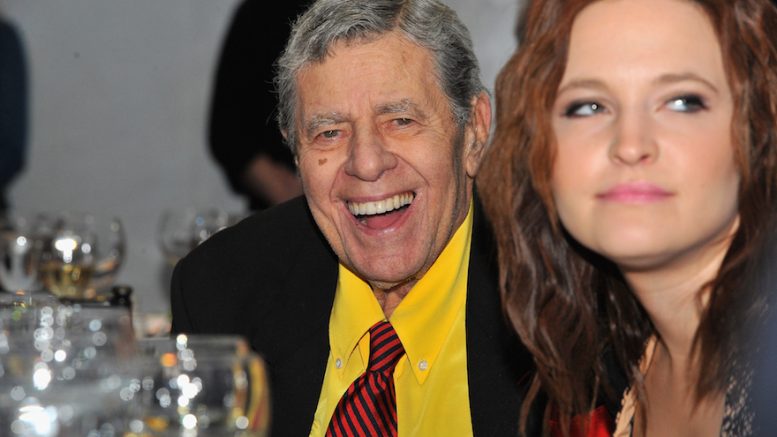 Comedian Jerry Lewis attending The Lincoln Awards: A Concert For Veterans & The Military Family at the John F. Kennedy Center for the Performing Arts in Washington, D.C., Jan. 7, 2015. (Larry French/Getty Images for The Friars Club)

(JTA) — Comedian and filmmaker Jerry Lewis, who rose to fame working with singer-actor Dean Martin and earned plaudits as host of the Muscular Dystrophy telethon for four decades, has died.

Lewis, who was known for his starring role in “The Nutty Professor,” died Sunday morning on August 20, 2017 at his home in Las Vegas, The Las Vegas Review Journal columnist John Katsilometes first reported. He was 91.

Though he was largely out of the movie industry by the end of the 1960s, Lewis continued to perform a comedy routine in Las Vegas, where he launched his career in 1949, according to Variety. He also had memorable serious roles in Martin Scorcese’s 1982 drama “The King of Comedy” and the 1980s TV drama “Wiseguy.”

Lewis, raised in Newark, New Jersey, was born Joseph Levitch to Borscht Belt entertainer parents Danny and Rae Levitch, who used the name Lewis when they appeared in small-time vaudeville and at Catskills resort hotels, according to The New York Times. Lewis, known as Joey when he was young, said the fact that his parents often left him in the care of his grandmother and aunts gave him a longstanding sense of insecurity and a need for attention.

Lewis began performing with Martin in 1946 after they performed on the same bill at a Manhattan nightclub and created an act that soared in popularity with Lewis using his physical slapstick comedy acting alongside Martin’s relaxed persona. The duo also starred in 13 films, but broke up after 10 years together, at which point they were barely speaking to each other.

Lewis and Martin reconciled in 1987, when Lewis attended the funeral of Dean Paul Martin Jr., Martin’s oldest son, a pilot in the California Air National Guard who had been killed in a crash. They continued to speak occasionally until Martin died in 1995, the Times reported.

Lewis began writing, producing and directing films in the late 1950s and ’60s. “Rock-a-Bye Baby” (1958), “The Geisha Boy” (1958) and “Cinderfella” (1960) were his first three films, and were directed by Lewismentor Frank Tashlin. Lewis wrote, directed and starred in the 1960 film “The Bellboy,” his directorial debut.

Lewis’ unreleased and apparently unwatchable 1972 Holocaust drama “The Day the Clown Cried” intrigued film buffs for decades; a 30-minute cut of the film surfaced online in 2016.

Lewis began hosting the annual Labor Day weekend Muscular Dystrophy Association telethon in 1966, remaining as host of the telethon and his beloved “Jerry’s Kids” until 2010, raising more than $2 billion during those years.

He received the Academy of Motion Pictures Arts & Sciences’ Jean Hersholt Humanitarian Award for his charitable activity in 2009. He has two stars on the Hollywood Walk of Fame — one for his movie work, the other for television.

Lewis, whose comedy style remained popular in France, was inducted by the French government into the Légion d’Honneur in 2006.

Lewis had two heart attacks, prostate cancer and pulmonary fibrosis. He also had suffered from a painkiller dependency in the ’80s.

He had six sons with his first wife, Patty Palmer: Gary, Ronnie, Scott, Anthony, Christopher and Joseph, who died in 2009. He is survived by his second wife, SanDee Pitnick, and their daughter.

Be the first to comment on "Jerry Lewis, comedian and filmmaker, dies at 91"