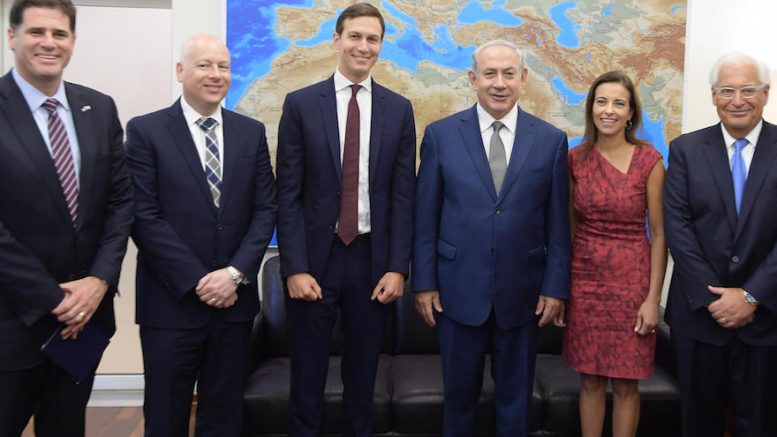 The meeting held on August 24 is part of a visit to the region by the U.S. diplomats. Kushner and the group were meeting that evening with Palestinian Authority President Mahmoud Abbas in Ramallah.

“We have a lot of things to talk about: how to advance peace, stability and security in our region – prosperity, too. And I think all of them are within our reach,” Netanyahu told Kushner during an appearance with reporters prior to the start of the meeting.

Kushner responded that Trump “is very committed to achieving a solution here that will be able to bring prosperity and peace to all people in this area, and we really appreciate the commitment of the prime minister and his team to engaging very thoughtfully and respectfully in the way that the president has asked them to do so.”

He added that the relationship between Israel and America “is stronger than ever.”

Abbas told a delegation of Israeli lawmakers from the left-wing Meretz party during a meeting in Ramallah earlier in the week, referring to the U.S. leadership, “I don’t even know how they are dealing with us because his entire administration is in chaos.”

He told the lawmakers he does not expect any breakthroughs.

“I have met with Trump envoys about 20 times since the beginning of his term as president of the United States,” Abbas said, Haaretz reported, citing notes taken by meeting participants. “Every time they repeatedly stressed to me how much they believe and are committed to a two-state solution and a halt to construction in the settlements. I have pleaded with them to say the same thing to Netanyahu, but they refrained. They said they would consider it but then they didn’t get back to me.”

Prior to its arrival in Israel, the delegation met with leaders in Egypt, Saudi Arabia and Jordan.

An unnamed U.S. diplomatic source told reporters in Jerusalem on Wednesday night after the arrival of the delegation that Trump wanted discussions “to focus on the transition to substantive … peace talks, the situation in Gaza, including how to ease the humanitarian crisis there, and the economic steps that can be taken.”