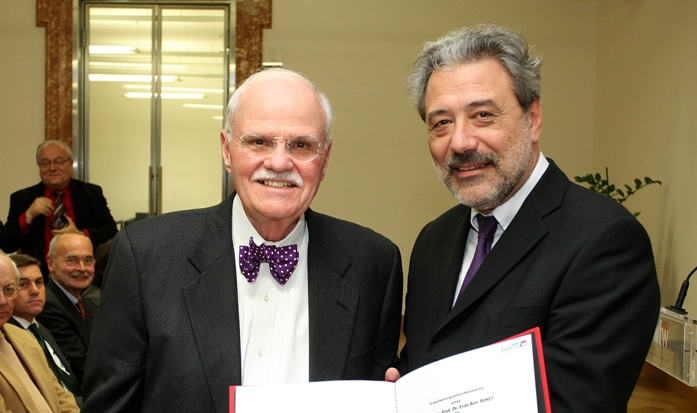 Professor Emeritus, acclaimed author Dr. Evan Burr Bukey will present this year's Toby and Saul Reichert Holocaust Lecture at the Wirth Institute at U of A on October 14. He is pictured above receiving a prestigious Austrian award for academic scholarship last year.

(EJNews) – The Wirth Institute for Austrian and Central European Studies has declared October to be Jewish Studies Month, and will be rolling out a number of events and exhibitions over the coming days.

The month kicked off with an exhibition of Synagogues of East-Central Europe, 1781-1944 on the third floor of the University of Alberta Arts Building from October 1-9.

On October 14, The Wirth Institute will be presenting the annual Toby & Saul Reichert Holocaust Lecture. This year’s topic “New Insights on the Holocaust” with Dr. Evan Burr Bukey, Professor Emeritus of History, University of Arkansas, will mark the 12th such lecture presented by the Wirth Institute. The lecture will be held at Telus Centre Auditorium at the University of Alberta at 5 pm and a reception will follow. There is no charge for the event. 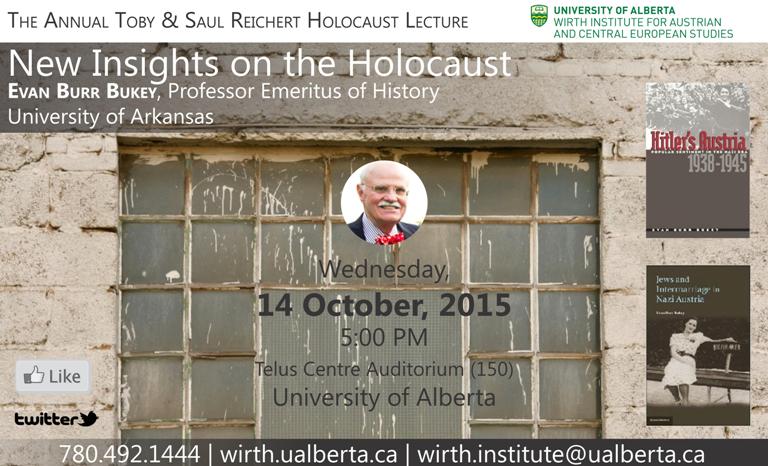 Don’t miss this rare opportunity to hear Dr. Bukey lecture. He is an award-winning author of three books. His first, Hitler’s Hometown: Linz, Austria, 1908-1945 (Indiana University Press, 1986), was praised for demonstrating the flexibility of interwar Austrian politics at the grass roots. Hitler’s Austria: Popular Sentiment in the Nazi Era, 1938-1945 (University of North Carolina Press, 2000) opened new avenues for research on National Socialism. His most recent, Jews and Intermarriage in Nazi Austria (Cambridge University Press, 2011), considers the issue of marriages between Jews and non–Jews and their children after 1938.

Dr. Bukey received the National Jewish Book Award in 2000 and the Austrian Cultural Prize in 2001. Most recently, he was awarded Austria’s highest award for academic scholarship, the 2014 Karl von Vogelsang National Award for History and Social Sciences, awarded to him by the Austrian government.

This campus and community-wide public lecture is made possible by the support of the broader Edmonton community, as well as Mr. Saul and Mrs. Toby Reichert.

Saul Reichert was born in Pabianice, Poland.  He was nine years old at the outbreak of World War II.  Following the German occupation of their hometown, Saul’s family home, business, and possessions were plundered, and they were forced to resettle in the Lodz Ghetto.  From there, they were eventually shipped to the notorious Auschwitz-Birkenau death camp.  Upon arriving here, Saul was separated from his mother and sister, and never saw them again.  Saul managed to survive, and was liberated by US troops in May, 1945.

The Reicherts regard the Wirth Institute’s lecture series as a way of keeping knowledge and understanding of the Holocaust alive among future generations of students, not only serving the purpose of commemorating the tragedy, but as a cautionary epistle against such monumental injustices perpetrated on the innocent.

On Friday October 16 from 2-3:30 pm, A Central European Cafe 2 will be held in the Student Lounge at Arts & Convocation Hall, featuring the work of Regan Treewater, PhD. (ABD) candidate, Comparative Literature, Department of Modern Languages and Cultural Studies. The topic is “The Disney-fication of Jewish Poland: Combating Holocaust Commercialism with the Preservation of Survivor Memories.”

Sunday, October 18 will mark the official opening of the Rudolf Vrba Holocaust Reading Room at 2 pm in Suite 300-H of the Arts & Convocation Hall. A reception will follow. Please RSVP for this event by phone 780-492-1444 or email wirth.institute@ualberta.ca.

About the Wirth Institute

The Wirth Institute for Austrian and Central European Studies was originally established at the University of Alberta in 1998 upon an initiative by the Austrian Federal Ministry of the Sciences, the Austrian Ministry of Foreign Affairs and the Austrian Conference of University Presidents as the “Canadian Centre for Austrian and Central European Studies.” Subsequently the Centre also received the support of the Governments of Croatia, the Czech Republic, Hungary, Poland, Slovakia and Slovenia.

Renamed the “Wirth Institute for Austrian and Central European Studies” in October 2003 in recognition of Dr. Manfred and Dr. Alfred Wirth’s generous endowment, their principal mandate is to raise the profile of Central Europe and Central European Studies in Canada and to provide a leadership role in a network of cooperation in this field with other Canadian universities. They act as both an academic and cultural institute and sponsor and organize lectures, conferences, artistic festivals, symposia, concerts, exhibitions and other scholarly and cultural events with an Austrian and central European theme. They also engage in international cooperative ventures with institutions in the United States and Europe.