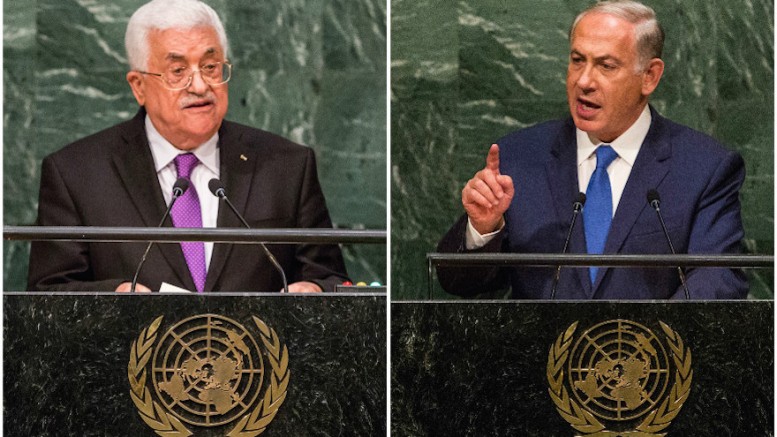 TEL AVIV (JTA) — Benjamin Netanyahu and Mahmoud Abbas took plenty of shots at each other.

But in their dueling dueling speeches to the United Nations General Assembly, the Israeli prime minister and Palestinian Authority president directed much of their fire at the same target: the assembled world leaders.

Netanyahu blamed world powers and international bodies for enthusiastically supporting what he sees as a misguided Iran deal. He began and ended his speech by calling on the U.N. to correct its record of hostility to Israel.

And in what has quickly become the speech’s iconic moment, the man known for his articulate words and clever turns of phrase glowered in silence at the General Assembly for 44 seconds — indicting the body for what he called its “deafening silence” on Iran’s threats to annihilate Israel.

“Iran’s rulers promise to destroy my country, murder my people,” he said. “And the response from this body, the response from nearly every one of the governments represented here has been absolutely nothing. Utter silence. Deafening silence. Perhaps you can now understand why Israel is not joining you in celebrating this deal.”

Just as Netanyahu accused world leaders of abandoning the Jews, Abbas began his speech by blaming them for abandoning the Palestinians. He peppered his speech with condemnations of Israel, but his main plea was to the institutions that recognize statehood — the U.N. and world governments.

The issue of Palestinian statehood, said Abbas, has been on the U.N. agenda almost from the organization’s founding. And while he said Israel must abide by its commitments, he placed the onus on the U.N. to push his cause forward.

“The organization and its members continue to be unable to end this injustice inflicted upon our people and to assist our people to exercise their right to self-determination and freedom in their independent and sovereign state,” he said. “Our people have placed their hopes on the countries of this organization to help them to gain their freedom, independence and sovereignty.”

Abbas did praise recent international efforts aimed at bringing Palestinian statehood closer. Strung throughout his speech was a laundry list of recent achievements, including Palestinian accession to international conventions, recognition of a State of Palestine by 138 countries and a vote in favor of raising a Palestinian flag at U.N. headquarters — since enacted.

But Abbas also seemed to understand that international recognition is largely symbolic. He reminded the audience of unheeded U.N. resolutions supporting Palestinian statehood. He noted that while the Palestinian flag may fly at the U.N., it still doesn’t fly in east Jerusalem, which Palestinians claim as their capital. And though he accused Israel of breaking its commitments to the P.A. and “working extremely hard to destroy the two-state solution,” he ended his speech not with a plea to the U.N. but with an entreaty to Israel’s citizens.

“I say to our neighbors, the Israeli people, that peace is in your interest, in our interest and in the interest of our future generations,” Abbas said. “Narrow vision is destructive. I hope that you will consider the dangerous reality on the ground and look to the future and accept for the Palestinian people what you accept for yourselves.”

Like Abbas, Netanyahu questioned the U.N.’s follow-through — noting unheeded U.N. Security Council resolutions opposing the Iranian regime’s nuclear program. When Netanyahu mentioned the international commitment to prevent an Iranian nuclear weapon, he sounded dismissive. He declared multiple times that Israel wouldn’t hesitate to defend itself alone — whether against Iranian proxies in Syria or against Iran itself.

“Israel will not permit any force on earth to threaten its future,” Netanyahu said. “And here’s my message to all the countries represented here: Whatever resolutions you may adopt in this building, whatever decisions you may take in your capitals, Israel will do whatever it must do to defend our state and to defend our people.”

But as much as both leaders criticized the U.N., each presented his nation as representative of a global good. Abbas portrayed the failure of Palestinian statehood as a failure of international cooperation. And Netanyahu ended his speech by saying that in fighting extremist Islam, Israel serves as the front line for the rest of the world.

Both men, it seems, want and need the world’s support, even if they don’t think they’re going to get it.

Be the first to comment on "Netanyahu and Abbas agree: Blame the UN"