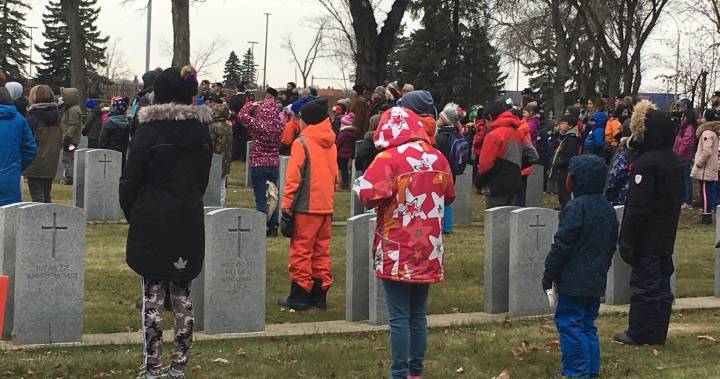 Excellent coverage by Global News of the No Stone Left Alone Service held in Edmonton on November 1, 2019.

(November 6, 2019) – Dozens of ceremonies took place across Canada on Monday November 1, as part of an annual tradition that aims to ensure those who have served in the country’s military are not forgotten.

No Stone Left Alone is holding more than 100 remembrance ceremonies in more than 68 Canadian communities leading up to Remembrance Day, getting closer to its goal to have a student place a poppy on the headstone of every Canadian who has served in the country’s armed forces.

Maureen Bianchini-Purvis, whose parents served for Canada in the Second World War, started the No Stone Left Alone movement eight years ago. The first ceremony was held at Edmonton’s Beechmount cemetery.

Since then, the tradition has expanded beyond anything those behind the first ceremony thought possible. For the past three years, the event has reached an international level, with No Stone Left Alone ceremonies held in Krakow, Poland.

Dr. Eva Olsson spoke at Monday’s ceremony in Edmonton. The 95-year-old Holocaust survivor shared a story of her time in a concentration camp.

Click here to read more of this article and to watch the service in its entirety.