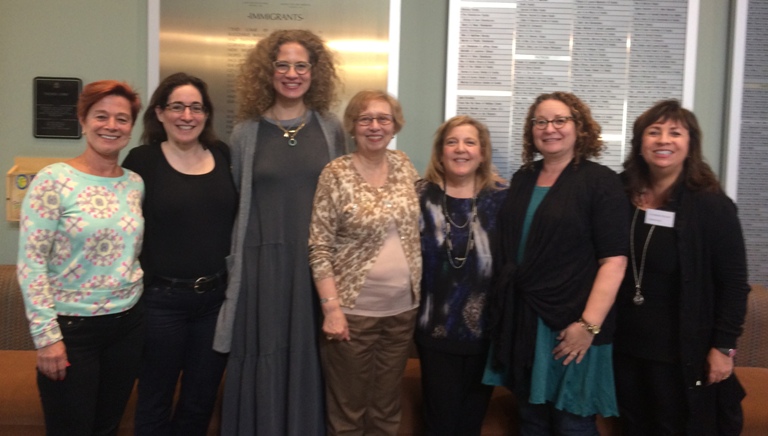 (Edmonton) – The National Council of Jewish Women of Canada (NCJWC) held a motivating and inspiring meeting that included representatives from across the country on Oct 17-19 in Winnipeg, Manitoba.   The meeting began on Saturday evening with a beautiful Havdalah service and Section interchange.   A special guest, Felicia Anchor, International Council of Jewish Women (ICJW), gave the group information about the upcoming ICJW meeting next May which is being held in Nashville. She also, the following day, lead a workshop on leadership and succession planning. A surprise announcement was made; the Bunny Gurvey Bursary Fund was established in honour of Bunny’s 90th birthday.  The Fund will help send people to the Herzog Institute for education and learning.

There was much excitement the next day when the new National website and logos were introduced.  Stay tuned for this will be happening in the near future.  We were honoured to hear from Noah Shack from the Centre for Israel and Jewish Affairs (CIJA), Ottawa, where he spoke about Genetic Testing and Insurance companies and the advocacy role that NCJWC can play on this issue.   No one should be discriminated against in the workplace or otherwise if they have a genetic predisposition to or currently have an illness or medical condition.  He also spoke about the refugee crisis and the role of the Jewish community.  NCJWC created and passed resolutions on both of these issues.

The group had a guided tour through the amazing and educational Canadian Museum for Human Rights.  This is definitely a “must-see” for those travelling to Winnipeg.  One of the galleries was centred on the Holocaust, which was generously supported by the Dianne and Irving Kipnes Foundation.

On Monday, at the Asper Jewish Community Campus, Estelle Sures gave a presentation about communication and media relations.  Stan Carbone, from the Jewish Heritage Centre of Western Canada, spoke to the attendees and then guided the group through the archival display in honour of Winnipeg Section’s 90th Anniversary.  What a beautiful display as it showed all the different community projects from the last 90 years!

A special thanks to the Irene Samuel Leadership Initiative which funds and encourages young people to attend NCJWC meetings.