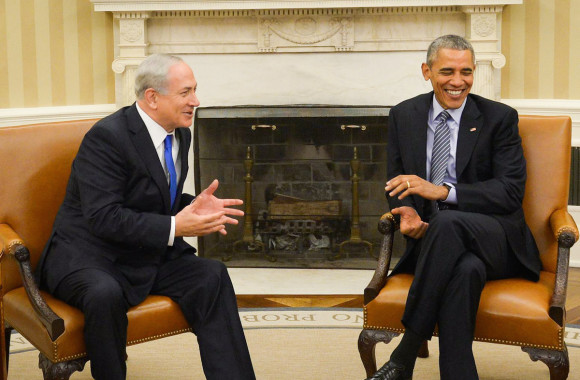 WASHINGTON (JTA) – It took agreeing to set aside differences on Iran and the Israeli-Palestinian peace process for President Barack Obama and Israeli Prime Minister Benjamin Netanyahu to get down to business on other issues afflicting the region, including the threat of Islamist extremism and the rise of Israeli-Palestinian violence.

Appearing pleased and relaxed — if hoarse — after meeting with Obama for more than two hours on Monday, Netanyahu told reporters that the two had a pragmatic discussion that lacked the contentiousness of their previous encounters.

“The conversation was substantive, practical,” Netanyahu told reporters after the meeting. “We have a common interest in keeping Iran from violating the agreement.”

Two major burrs that have irritated the U.S.-Israel relationship for months were removed in the lead-up to the meeting, with each leader scoring a win. Netanyahu acknowledged that the nuclear deal between Iran and six major powers is on its way to implementation, despite his vehement objections. And Obama administration officials said the president no longer held out hope for a comprehensive Israeli-Palestinian peace deal before the end of his term in January 2017.

“Not that we are agreed on the agreement,” Netanyahu said, referring to the Iran deal. “But we must look forward at what needs to be done.”

In remarks before their meeting in the Oval Office, each man signaled an understanding of what the other wanted. Netanyahu, free from the pressure of having to reach a final-status agreement with the Palestinians in the short term, recommitted to a two-state solution in the long run. Obama was furious when Netanyahu declared, on the eve of his re-election in March, that a Palestinian state would not rise on his watch.

“I want to make it clear that we have not given up our hope for peace,” Netanyahu said, looking Obama in the eyes — itself a change from previous tension-wracked meetings, when the leaders barely looked at each other.

“We’ll never give up the hope for peace. And I remain committed to a vision of peace of two states for two peoples, a demilitarized Palestinian state that recognizes the Jewish state.”

For his part, Obama said the two would discuss “how we can blunt the activities of ISIL, Hezbollah and other organizations in the region that carry out terrorist attacks.” And he reiterated his defense of Israel’s right to defend itself against Palestinian terrorism.

“I want to be very clear that we condemn in the strongest terms Palestinian violence against innocent Israeli citizens,” Obama said. “And I want to repeat once again, it is my strong belief that Israel has not just the right but the obligation to protect itself.”

“I did not sense any broad tension,” Netanyahu told Israeli reporters at a briefing after the meeting. “It was not a symposium for debate, it was not a debating society — and there have been such meetings. But this, for sure, was not.”

Instead, Netanyahu and his team, including national security adviser Yossi Cohen, outlined the technological challenges facing Israel in dealing with the rise of the Islamic State and an Iran emboldened by the nuclear deal.

One focus of the discussion was renewing the 10-year defense assistance memorandum of understanding between Israel and the United States. Under its current terms, due to expire in 2018, Israel receives an average of $3 billion a year.

Netanyahu would not address the particulars of the Israeli request, but Israeli officials have said that Israel wants a comprehensive package that would amount to as much as $50 billion over 10 years, or $5 billion a year. It would include missile defense cooperation, which is now considered separately from the $3 billion in annual defense assistance and amounts to about an additional $700 million in U.S. contributions.

He said Israel was eager to avoid inflaming the recent violence, which has focused on the Temple Mount, also known as Haram al-Sharif, the Jerusalem site holy to both Muslims and Jews.

Netanyahu said he raised with Obama proposals that his Cabinet had unanimously endorsed. The Israeli leader did not describe the proposals except to say that they included easing movement and the transfer of goods to Palestinians.

Another key issue was Syria. Netanyahu said it was critical that whatever the outcome of the civil war in that country, Iran should not be able to open a front against Israel on the Syrian border. Iran is actively assisting the Assad regime.

Be the first to comment on "Disagreements behind them, Obama and Netanyahu get down to business"