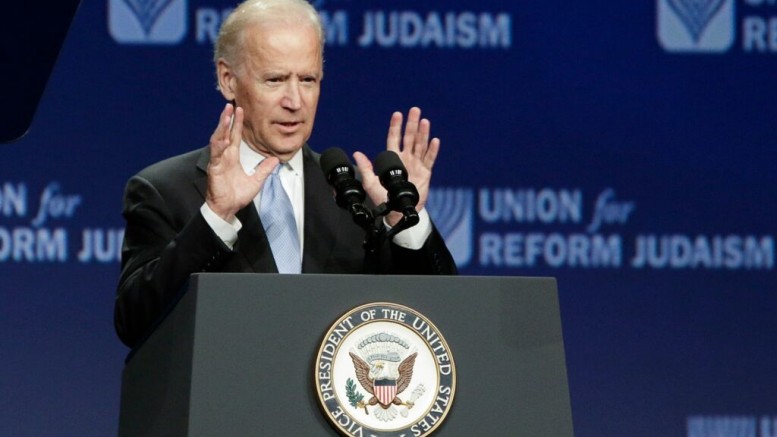 U.S. Vice President Joe Biden speaking in Orlando to 5,000 people at the Biennial of the Union for Reform Judaism, Nov. 7, 2015. (Courtesy of URJ)

ORLANDO, Fla. (JTA) — Thousands of Reform Jews cheered Vice President Joe Biden’s criticism of Israeli settlements, but were even more boisterous in applauding his pledge to fight the delegitimization of Israel and to stop Iran from acquiring a nuclear weapon.

In a keynote address to 5,000 people at the 2015 Biennial of the Union for Reform Judaism on November 7, 2015, Biden acknowledged disagreements between the Obama administration and Israeli government over settlements and the Iran deal. But, he added, the “core of our alliance is as strong as steel.”

“No one president or prime minister can alter that no matter what they do,” Biden said.

Biden stressed the need to turn the focus on the Iran deal to ensuring that Iran lives up to its commitments. The vice president pledged that if Iran tries to cheat, sanctions will snap back. If Iran does cheat, he added, all options — including the “use of military force” — remain on the table for stopping any future Iranian pursuit of a nuclear weapon.

“We simply will not permit Iran to acquire a nuclear weapon. Period. Period,” he said.

Biden received strong applause for his comments on stopping Iran, as well as his pledge that the Obama administration would work with Israel to strengthen its military capability in the face of a host of regional threats.

The audience cheered when he declared that “there is no excuse, there should be no tolerance for any member or employee of the Israeli administration referring to the president of the United States in derogatory terms. Period. Period. Period. Period.” The comment appeared to be a reference to Ran Baratz, Prime Minister Benjamin Netanyahu’s pick to serve as his media chief. After announcing the potential appointment, it surfaced that Baratz, a former university lecturer, posted on Facebook in March that Obama’s reaction to Netanyahu’s speech to Congress was “modern anti-Semitism.” He also has mocked Secretary of State John Kerry and Israeli President Reuven Rivlin.

“Not withstanding those terrible comments,” Biden said, “no one, no one, no one can undermine our relationship and the security of the Jewish and democratic State of Israel.”

Baratz has apologized both for the comments and for not informing Netanyahu about them. For his part, the prime minister has criticized the comments — but has not backed off his plans to appoint Baratz.

Biden praised Rabbi David Saperstein, the longtime director of the Reform movement’s Washington office who now serves as United States ambassador-at-large for international religious freedom. Saperstein was honored earlier in the evening. And the vice president thanked the Reform movement for working with him for decades on a host of liberal domestic issues, as well as efforts to bring Soviet Jews and Ethiopian Jews to Israel in the 1980s and to stop genocide in the Balkans in the 1990s. He also praised the Reform movement for quickly backing him in 2012 when he got ahead of the president in voicing support for legalized gay marriage.

The vice president attributed the Reform movement’s activism to its immigrant history.

“You don’t forget,” Biden said. “That’s what I love about you. You do not forget.”