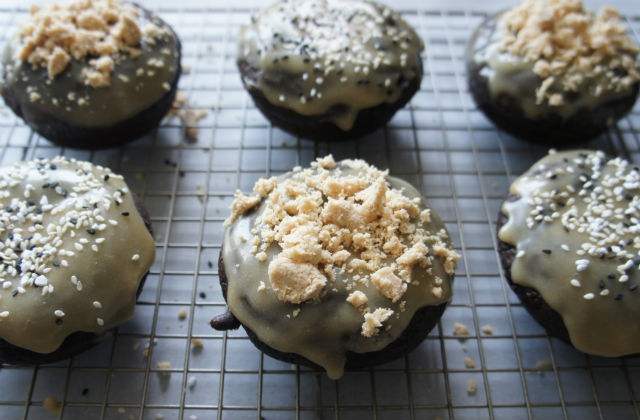 Are you getting in the mood for Chanukah? These Halva Donuts might tide you over until it's time for sufganiyot!

By Shannon Sarna
(The Nosher via JTA) — Move over cupcake, there’s a new trendy dessert in town and her name is the donut. Don’t get me wrong – I like a good cupcake just like the next sweets-loving gal. But I have been particularly excited to watch as the cupcake has been dethroned while the donut has taken over as the next “it” dessert.

Trendy delicious donuts have been cropping up all over the country for the past few years. There are several ultimate lists of where to get the best donuts, including this recent roundup from The Huffington Post. Be warned: You will drool and start craving donuts after perusing the list.

But you don’t need to venture out of your own kitchen to make awesome donuts. I’ve tried my hand at several varieties over the past few years, including cranberry relish filled donuts in celebration of the epic Thanksgivukkah of 2013 and peanut butter and jelly donuts last Hanukkah. Both versions were sweet, fried deliciousness.

Recently I got it into my head that I wanted to combine chocolate and halva into a donut creation. I wanted to fry the donut, but my friend Danielle (a trained pastry chef) convinced me to consider a baked version. I was skeptical. I scowled. But she was right and I am embarrassed to admit how many of these donuts I managed to eat in one day.

Baked not fried, but every bit as decadent and delicious as their greasier fried cousin, these donuts were actually much easier to throw together than making a yeast dough and waiting to let them rise. I think I threw together the dough, baked them and glazed them all within 45 minutes — a very doable task even on busy days.

I used this Wilton donut pan to bake them. The extra crumbled halva on top really put the donut over the edge, so if you can get your hands on a bar it is worth it. Halva can be purchased at most major supermarkets. I also used Soom Foods tahini, one of my favorite products that is certified kosher and available on Amazon, but you can use whatever tahini you like and have available.

In another smaller bowl whisk together vanilla, egg, yogurt, milk and oil.

Bake for 8-10 minutes or until tops spring back when you touch them.

While the donuts are baking, make the glaze by whisking together powdered sugar, tahini and 2 tablespoons milk. If glaze seems too thick, add another 1-2 tablespoons of milk.

Let the donuts cool in the pan for 10 minutes.

Remove and glaze immediately. Top with crumbled halva and sesame seeds if desired.

Be the first to comment on "Recipe: Chocolate Halva Donuts will tide you over til Chanukah"