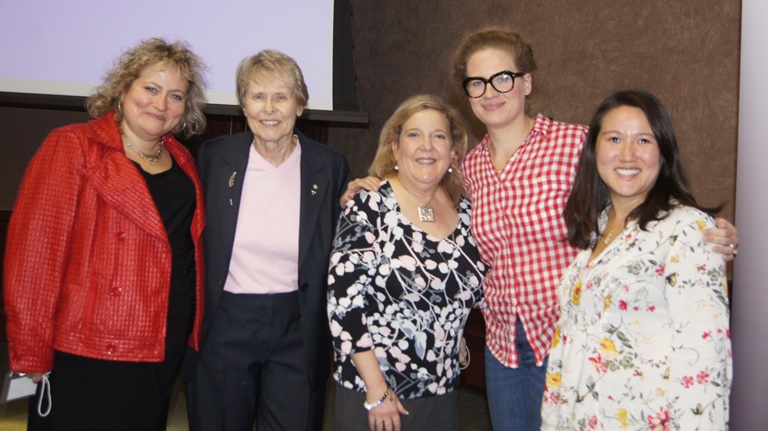 (EJNews) – A group of inspired Jewish women from across Canada congregated under the big city lights of North York to celebrate a very momentous occasion – the National Council of Jewish Women’s 120th birthday!  Since 1897 NCJWC’s members have sought, above all else, to positively transform and impact the world around them.  What was once a small contingent of Toronto women gathering, rather informally, in parlour rooms and shul basements, is now a strong national organization with active sections in Vancouver, Edmonton, Winnipeg and, of course, Toronto.

This year, with so much to pay tribute to, the NCJWC Annual Convention hosted many special guests.  Felicia Anchor, of NCJW Nashville, joined the festivities as a representative of all partner North American chapters.  All the way from Sydney Australia, International Council of Jewish Women (ICJW) President Robyn Lenn made a transcontinental journey to wish her Canadian comrades a great big mazel tov!  Joined by a long list of past national Canadian presidents and board members, this year’s Convention was everything a 120th birthday should be.

As members applauded three years of incredible leadership by Winnipeg based National President Sharon Allentuck, they joyously welcomed Toronto’s Debbie Wasserman to ascend this prestigious role.  This changing of the guard also brought a strong Edmonton voice to the National Executive Board.  Edmonton’s Jewish community should be proud, as our local section is now represented by Frida Pesin.  Frida has been confirmed by Council as NCJWC’s National Secretary – a position she will no doubt serve in brilliantly.  Frida commented: “I am excited to serve such a worthy organization.”  Mazel tov Frida!

On October 21 at Toronto’s Temple Sinai, in honour of the auspicious occasion, an elegant luncheon was held to celebrate the last 120 years and all that is yet to come.  Women of all ages shared stories, exchanged warm hugs and toasted NCJWC’s countless contributions to communities across Canada.

“I love volunteering for an organization where we are able to help individuals, families and communities in need,” commented Edmonton Section President Jodi Zabludowski.  “We have a strong history in Edmonton, which has motivated me to stay active and involved.”

Many of these social action initiatives were highlighted in a touching slideshow commemorating NCJWC’s history and enduring spirit of giving.  Also depicted in this presentation, was Edmonton Section’s food, book and clothing drive of fall 2016, to which many from the community contributed generously.  Bianca Krimberg, NCJWC’s Child Poverty Chair reported that “the donation drive was a major success and the school was incredibly thankful.” 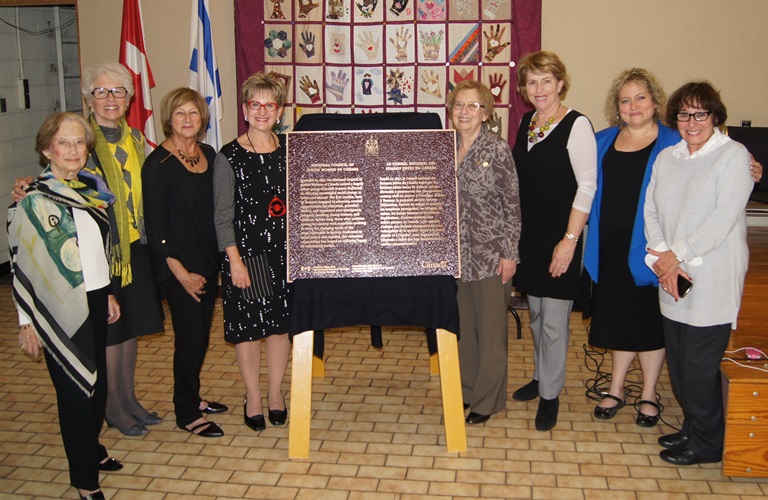 The National Board of National Council of Jewish Women Canada display the 120th anniversary plaque at the annual convention held in Toronto on October 22, 2017.

Also present to share in the festivities and express her congratulations was Canadian space-exploring legend, Dr. Roberta Bondar.  For eight days, one hour and forty-six minutes Bondar and a team of fellow scientists orbited the Earth on NASA’s first ever International Microgravity Laboratory Mission.  Dr. Bondar, a neurologist, served as the mission’s Payload Specialist.  Larger than life, with a presence that commands respect and awe, she explained how critical perseverance was for her as she built what became an illustrious and distinguished career.  The unwavering determination and inner strength that Dr. Bondar described resonated deeply for those who dedicated decades of passion and selflessness to NCJWC’s heartfelt cause – tikkun olam.  In an empowering and dynamic speech Dr. Bondar shared with the audience how difficult it was for her to break free of the professional barriers that were once common in science and medicine.  Born in 1945, Dr. Bondar established herself within the medical community during a time when young girls were not encouraged to pursue science – a true enduring female role model if ever there was one.

In August of this year NCJWC sold its historic property on Bathurst Street.  The site housed the organization’s national headquarters for fifty-three exceptional years.  On October 22, members bid farewell to the space – reminiscing in waves of shared nostalgia.  “The building is getting older; we decided it was time to sell, that the building didn’t necessarily need to define us and we could find a vital future in a new location,” commented Toronto’s Immediate Past-President Ena Cord in an interview with the Canadian Jewish News.  Perhaps the floor tiles at 4700 Bathurst Street now bear the cracks of five decades, trodden by the determined footsteps of change – but for one last touching gathering of Vancouver, Edmonton, Winnipeg and Toronto members, the building’s walls sheltered these resilient pioneers of social progress.

Israel’s Consul General for Western Canada, Galit Baram, delivered a keynote address commending NCJWC’s 120 years of devoted service.  She spoke warmly to the women gathered around her in such a disarming manner that, at times, the atmosphere felt more like a bunch of old friends chatting about world affairs around a kitchen table rather than the stately diplomatic occasion that it in fact was.  Baram graciously posed for photos and stayed on after her speech to answer audience questions.  Dignified and eloquent, Baram’s visit was a reminder to all those present that although there is still much to do to repair the world, members should take pride in all that has been accomplished over the last 120 years.

The Historic Sites and Monuments Board of Canada unveiled and presented NCJWC with a bronze plaque in recognition of the organization’s past 120 years of dedication.  In the early days NCJWC members would greet immigrants at Union Station to ensure their welfare and protect them from unscrupulous opportunists that lay in wait on the train platforms to take advantage of newcomers to Canada.

“Over the years we have helped the Youth Empowerment Support Services, Jewish Family Services, WIN House, The Alberta Council of Women’s Shelters, The Hereditary Breast and Ovarian Cancer Society and many other causes that affect women and children,” Edmonton Section’s President Jodi Zabludowski explained.  Similar projects have been orchestrated by other NCJWC sections, positively impacting thousands each year.  NCJWC continues to promote awareness for hereditary genetic disease screening and the prevention of human trafficking.  With the Chair of Child Poverty here in Edmonton, local efforts have recently focused on improving the lives of underprivileged children in our own, and nearby, communities.  Jodi concluded, “Yasher koach goes to the Jewish women of the past in Edmonton who believed in a cause and did not give up!”

And from everyone in the Edmonton Section – thank you to each woman who gave something from her own heart to nurture and grow NCJWC into what it is today – a shining example of kindness, strength and vitality.  Mazel tov to you all!