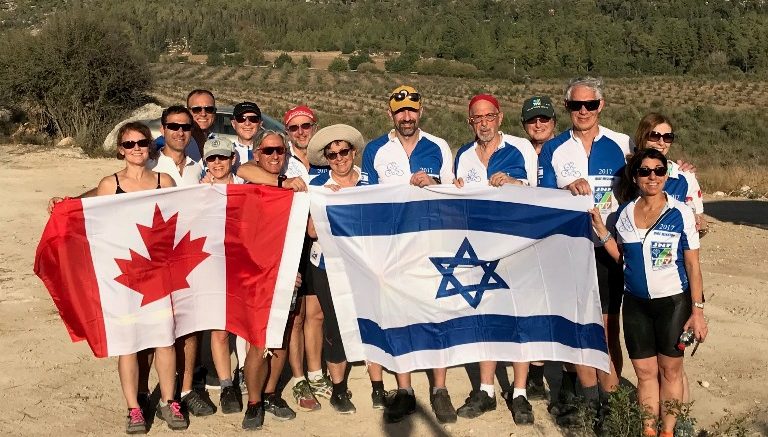 JNF Canada hosted an exceptional Bike Mission to Israel last month that included primarily Edmonton participants. The trip was a huge success providing a wonderful opportunity to explore and experience Israel in a unique way.

(EJNews) – This past fall, my husband and I were planning a trip to Israel to visit our daughter who is studying in Tel Aviv. We have been to Israel many times – we lived in Israel for a year with our four children – so we were looking for another way to view the country.  As we were contemplating our options, I noticed an email from JNF float across my computer. A bike tour of the Negev desert was being advertised. I shared this ad with my husband who is an avid cyclist – and his response came back to me in a matter of minutes. Let’s do it!

Without much information, and quicker than we decide what to order in a restaurant, we booked our spots on the bike tour. The excitement of seeing Israel as cyclists, and having an active vacation as part of a group, was enticing to us.

That’s when we were told that a number of the participants were from Edmonton.   We thought –really? Amazing.  It will be fun to hang out with other prairie folk.  Must be an interesting group if they all want to go cycling together. We had no idea what we were getting ourselves into.

We met up with the group in Tel Aviv on the date of the bike departure. We quickly discovered that we were The Foreigners.  Of our intimate group of fourteen, ten of the members of the group hailed from Edmonton.  The other four included my husband and I, the father of one of the Edmontonians who is based in Niagara on the Lake, and a woman from Toronto.

From the first night the group bonded immediately.  Despite the fact that we were The Foreigners, we were warmly welcomed into the group.  Laughs were in abundance.   Within a short period of time, our group developed a roster of inside jokes, code words, and affectionate teasing of one another. Sure there were the stronger cyclists and the less experienced cyclists, but the bottom line was that we were all committed to this incredible experience of seeing the beauty and culture of the country of Israel together.

We cycled for 7 days accumulating a total of just under 240 kms in our trek through the Negev. 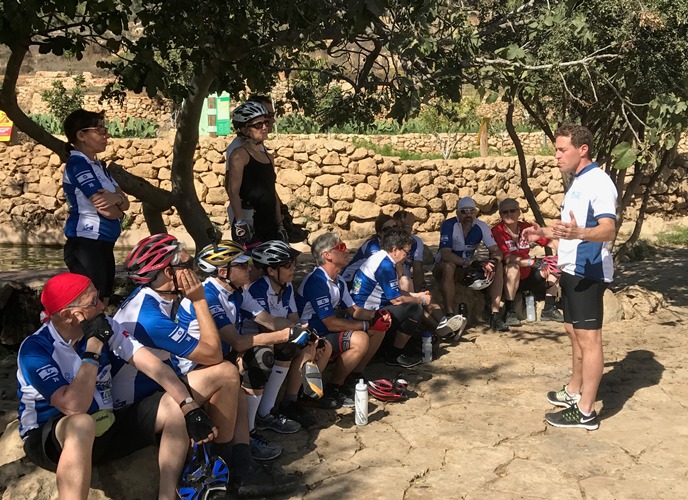 A JNF Bike Mission is an extraordinary way to experience Israel. Contact edmonton@jnf.ca for information about upcoming events.

Our journey began with a drive from Tel Aviv to Ashkelon.  En route we stopped to visit Achim l’chaim – Brothers for Life. This JNF project had a profound impact on all of us.  Achim l’chaim is an organization that supports wounded soldiers. Soldiers shared powerful stories of the traumas that had changed their lives, the impact of PTSD, and other injuries that they had survived.  We left Achim l’Chaim with strong memories of the soldiers we had encountered.

After an overnight in Ashkelon, we mounted our bikes for our first serious day of cycling. We headed to the Erez crossing, looking into Gaza, where we focused our cameras in the opposite direction from Gaza, as one is not supposed to photograph the Erez border crossing.

We continued by bike to Sderot, well known for being close to the border of Gaza and the recipient of many rocket attacks over the years. I was surprised to see the work that had been done in this city by JNF.  There were several beautiful parks and developments within the city. From the publicity I’d read about the seriousness of the attacks the city had undergone, this is not at all what I expected.   As a matter of fact, we had the best lunch of the whole trip in a small restaurant in Sderot, where the serving staff continued to bring copious amounts of food to our tables. It is impressive to see how well the residents of Sderot live, despite the frequent danger – evidence that JNF has done much to improve their standard of living.

Following Sderot, we visited Shlomit, a community that felt as if it had been pulled out of the late 1800s – a group of pioneers reminiscent of the first settlers – the halutzim of Israel.  People live in caravans, at the junction of Israel, Gaza and the Sinai.  There are about 50 families, a religious Zionist community, committed to building the land and populating this remote area.  I wondered how unpleasant it is during a sand storm, as I felt the sand and heat making me a wee bit dizzy. One of the women took us to visit the farms where various crops were growing in the desert, under the benevolent eye of JNF.  We discussed the fact that none of us felt the desire to move to Shlomit – but one had to admire the resolve of the residents!

That night we slept in Mitzpe Ramon, on the edge of the Mahtesh hagadol.

The next day we cycled from Mitzpe Ramon to Yerucham. We stopped at Sde Boker to taste some wine from a local winery.  In Yerucham we ate lunch in a restaurant in the home of the Malcat Yerucham – the Queens of Yerucham.

From Yerucham we began our descent to the Dead Sea through the Hatira Crater.  That is where I had my first moment of panic when I looked into the astonishingly beautiful crater and realized I had to go…down.  However, that was nothing compared to the descent down the road known as the Scorpion Ascent.  I focused on my husband and promised not to look over the edge as we rode our brakes slowly down a steep zigzag path that continued for over 15 minutes, without a guard -rail. Definitely a proud moment for me when I reached the bottom and the rest of the group cheered – I had confided in them earlier that I have a fear of heights!

We continued our bike ride on the Peace Route, along the Israel- Jordan border, stopping at a location to see the farming accomplishments in the area.  That night we spent at the Dead Sea.

The next day was a challenging cycle from the Dead Sea to Masada. This was the first time that my husband and I had taken the cable car up Masada instead of climbing.  We were so hot and exhausted from the bike journey, I felt no guilt in accepting the cable car option!

From Masada we went on to Jerusalem to prepare for Shabbat.

Shabbat was a highlight of the trip. That night we all walked to the Kotel to have Kabalat Shabbat at the Wall. The meal that we ate in the Leonardo hotel that night was the most memorable of the week.  For my husband and I who keep kosher, the options of steak, roast, lamb, chicken – were endless and mouth watering.  We sang zemiros (led by my husband) until late into the night, at one point dancing around our table!

After a thoroughly relaxing Shabbat in Jerusalem, we did a night ride through the old city – one of the scarier cycles as it was a challenge to avoid the cars and people on the narrow cobblestone streets!

The following day we rode on a new bike trail that circles Jerusalem.  What a treat!  We had been accustomed to riding on the highway.  To ride on a bike path felt like luxury. Our journey that day ended at the Cramim Spa Hotel – a highlight in every way.  The food, the spa, the hotel rooms, the service  – everything about Cramim is to be recommended.  I would be happy to visit annually.

The next day we were transported to Tel Aviv for a final dinner and fond goodbyes to our new found friends.

Our holiday was a thorough ten out of ten.  My husband and I are thrilled that we accomplished the challenges of the bike journey through the starkly beautiful Negev Desert.  We have a whole new group of close friends.  We visited sites that we would not have been able to visit had it not been for the JNF arrangements.  We saw the desert in a way that cannot be compared to views through the windows of a car.

Would I do it again? You bet!

Our new- found friends are already talking about a reunion in Edmonton!