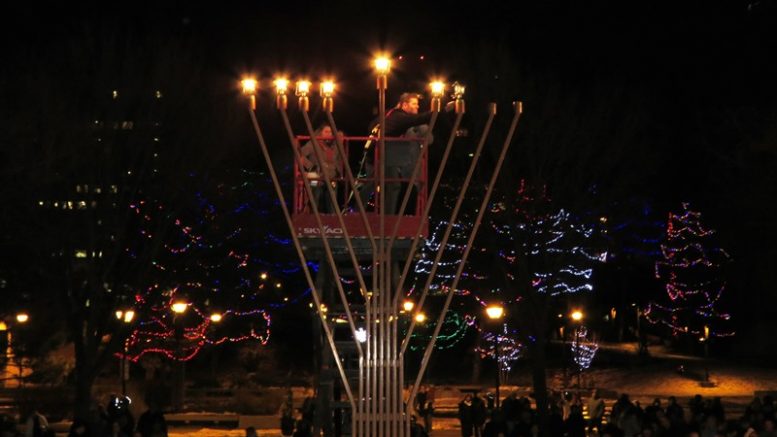 Edmonton Jewish Federation President Steven Shafir lights the Giant Menorah at the Alberta Legislature Grounds on the sixth night of Chanukah. The 26th annual event was hosted by Chabad of Edmonton.

(EJNews) – There was an abundance of warmth and good cheer at the 26th annual Chanukah Candle Lighting Ceremony held at the Alberta Legislature Grounds in Edmonton on December 17. And it wasn’t just the warm weather!

There was a lot of love and joy in the atrium as Global TV’s Mike Sobel welcomed the packed room to the sixth night of Chanukah hosted by Chabad of Edmonton. He introduced the honoured guests and officials which included Chabad Rabbi Ari and Rifka Drelich, MP Kelly McCauley, MLAs Lorne Dach, David Shepherd and Lori Sigurdson as well as President of the Jewish Federation of Edmonton Steven Shafir. Edmonton City Councilors Andrew Knack, Bev Esslinger and Jon Dziadyk were also in attendance.

In his first community event since becoming JFed President, Shafir warmly welcomed the Edmonton Jewish families and friends to the giant menorah lighting and said what an honour it is for the Jewish Federation of Edmonton to partner with Chabad at this wonderful annual event.

The crowd was then treated to a few rousing  Chanukah songs by Rabbi Eliayahu Glatt and pianist Paul Polushin.

MP Kelly McCauley then wished everyone at the gathering a happy Chanukah and Seasons Greetings from the House of Commons. 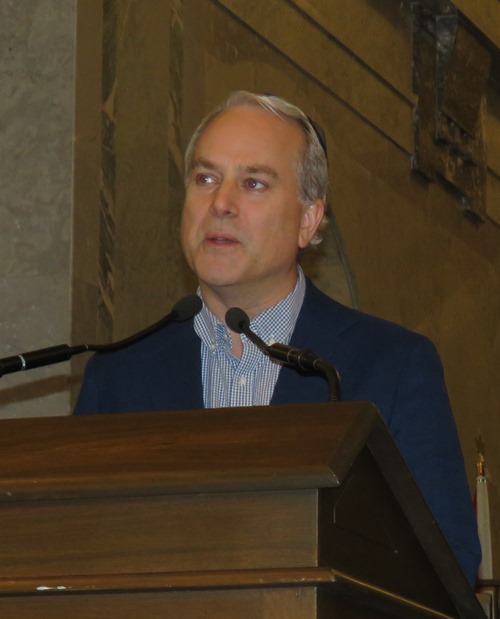 He said he was particularly pleased to be joining the Jewish community in celebration because earlier in the year he’d had “the privilege and honour to visit Israel. As a man of faith and a Christian, this is a special Chanukah for me,” he noted. “This past summer, I visited Jerusalem, the eternal city – Jerusalem the undivided capital.

“I am as well a member of Christians United for Israel, North America’s largest grassroots organization supporting Israel, and so I’m especially proud and honoured to be among my friends of the Jewish community as we celebrate Chanukah.

“Again, Happy Chanukah and thank you for inviting me to celebrate with you.”

Emcee Mike Sobel then introduced Minister of Seniors and Housing, the Hon. Lori Sigurdson, who was representing Rachel Notley, Premier of Alberta at the event. 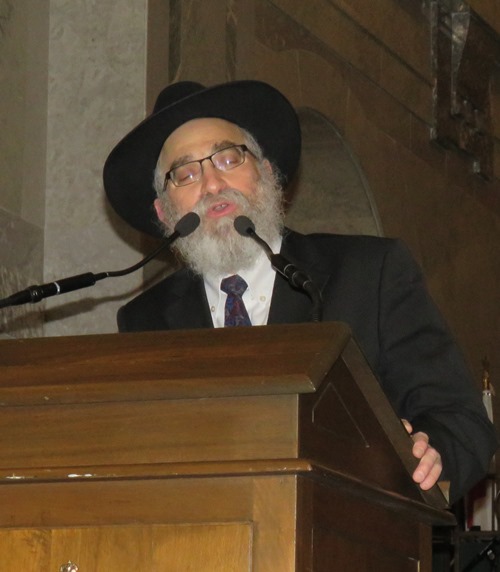 Sigurdson began by acknowledging “that we are gathered here today on the traditional territory of Treaty 6.” She also “acknowledged the Metis people of Alberta, who share a deep connection with this land.”

She also expressed that she was honoured to be participating with Rabbi Ari Drelich, her fellow elected officials and all the guests in the atrium.

She said, “As we gather on one of Alberta’s longest nights of the year, we celebrate Chanukah, the Jewish Festival of Lights. The first Chanukah took place more than two thousand years ago and its message is as relevant today as it was in the time of the Maccabees. 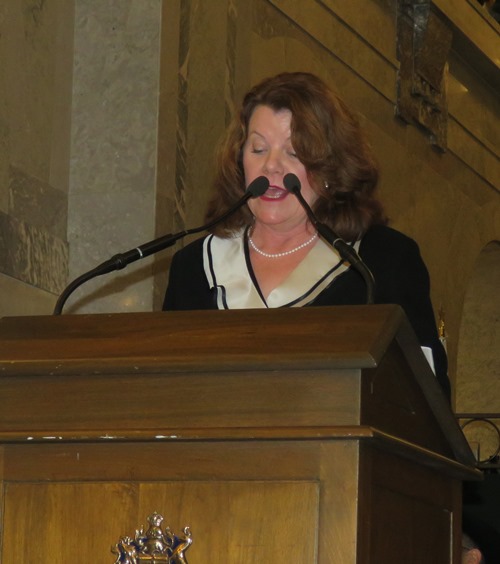 “Chanukah reminds us of the importance of faith – the light that guides us through the darkness of troubled times. As we light the candles on the menorah this afternoon, we think of the oil that outlasted every expectation and remember that even when our resources seem limited, our faith can see us through. And as the light of each candle is added to the others over the coming days, they will glow ever stronger as symbols of faith, hope and freedom of expression. May they brighten the futures we build for our families, our neighbours, our communities and our province.

“As our government works to make life better for Albertans, may we also ensure our province remains a welcoming light to people of all faiths around the world especially to those who struggle in the shadow of oppression.

“On behalf of Premier Notley and the Government of Alberta, I wish Jewish Albertans a very happy and blessed Chanukah. May the candles you light at home with your families: warm your hearts, strengthen your faith, and brighten your homes. And to all Albertans, I encourage you to take time this holiday season to reflect on the role that faith, hope and freedom play in your lives. Chag Chanukah Sameach!” 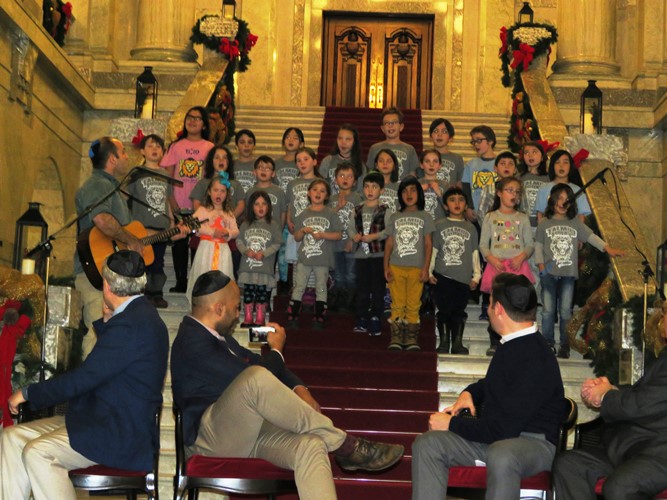 The Talmud Torah Choir sang a wonderful medley of Chanukah songs much to the delight of the entire crowd at the Legislature atrium!

Then to the delight of the crowd, the Talmud Torah School choir members filed up the stairs in the atrium, and under the leadership of their teacher Ben Ragosin, they sang a fabulous medley of Chanukah songs including all of the old favorites and a few new ones too. The students sang joyfully and their parents and grandparents beamed from within the crowd. The atmosphere was contagious and before long the entire room was filled with singing and clapping. It was truly glorious and the pride throughout the crowd was palpable that we have a strong Jewish Day School as part of the Edmonton Public School Division.

Chabad Rabbi Ari Drelich then welcomed the packed room to the sixth night of Chanukah. He thanked the many people who contributed to make the Menorah Lighting a success including the Jewish Federation and National Council of Jewish Women who help sponsor the event, and the Pinson and Blachman families for their hard work as well as all the volunteers and staff at the Legislature. It really is a wonderful team effort, said the Rabbi. 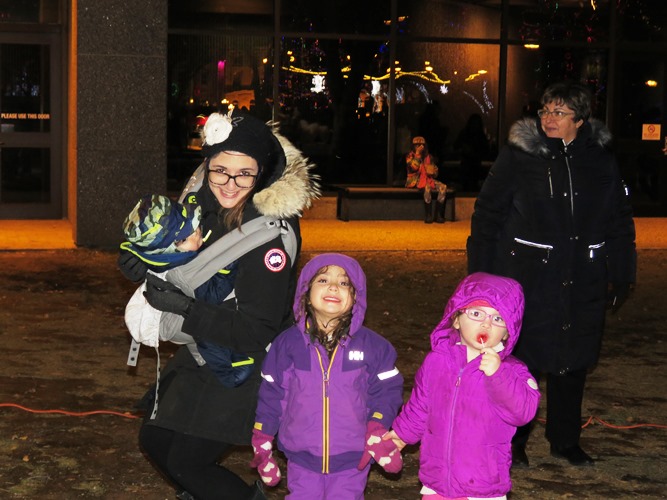 It was a beautiful evening to be outside lighting the sixth candle of the Giant Menorah at the Chabad Candlelighting Centre.

He concluded the formal part of the evening with these remarks. “The story is told of a great Rabbi whose young son once came to him crying that he and his friends were paying hide and seek and that his friends had failed to find him. When questioned as to why he was crying as that was the object of the game and that he actually won, he complained that his friends had abandoned him and gave of on searching for him.

“Upon hearing this the great Rabbi lifted his head heavenward and exclaimed: ‘All mighty G-D you have hidden so well from your children that they have given up searching for you.’

“The Maccabees – despite the slim chance of finding any suitable oil, none the less did not give up and searched until they found the one pure cruse of oil which led to the great miracle of Chanukah.” 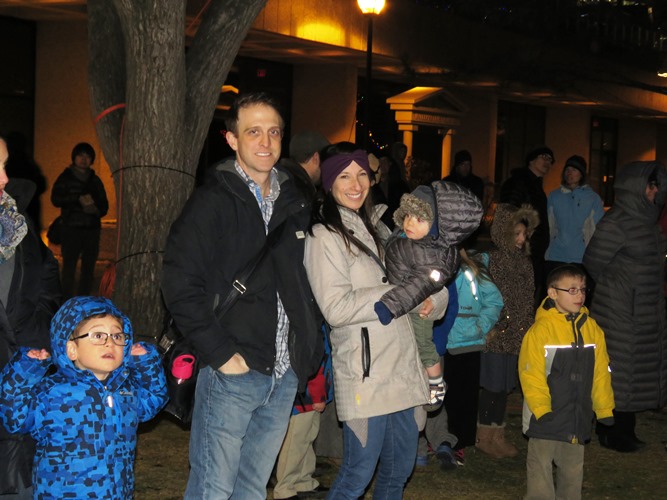 Fun for the whole family!

Rabbi Ari said that like the Maccabees we Jews face dark times but we too will not give up and we will not hide. We will celebrate our religious traditions with faith and light.

Mike Sobel then instructed the crowd to head across the walkway to the Giant Menorah where Rabbi Ari, Steven Shafir, Lori Sigurdson and Lorne Dache were hoisted up to light the six candles of Chanukah. The lights flickered and joined the beautiful display of seasonal lights that already so beautifully decorate the legislature grounds. The weather was seasonably warm and the ambience was magnificent.

Following the candle lighting there was a huge inside program that contained a veritable feast of sufganiyot, latkes, cotton candy and live music with games for the kids including dreidel fidget spinners and fun for the whole family led by the affable and energetic Rabbi Dovid Pinson. 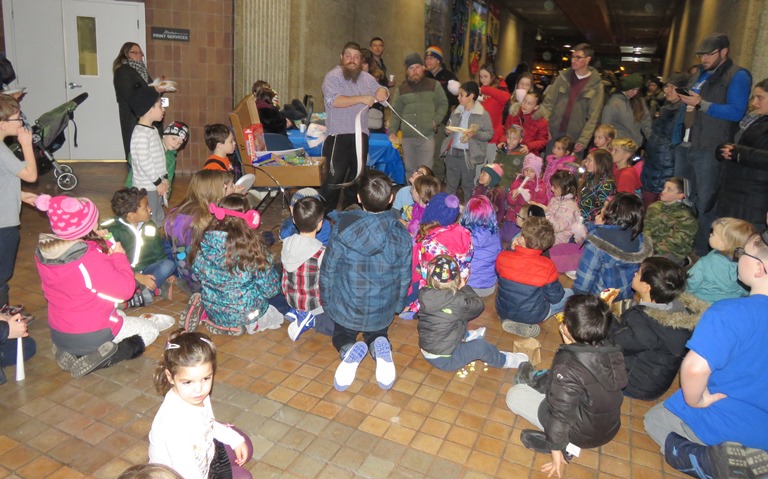 Dreidel fidget spinners were all the rage! 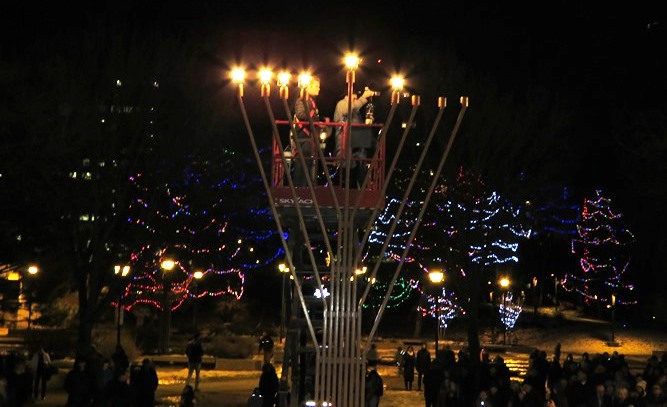