Reporter Maxine Fischbein and Alberta Jewish News have been awarded the Canadian Ethnic Media Award for Journalism Excellence in the Category of Community Engagement for outstanding coverage of the Calgary "Here to Tell exhibit: Faces of Holocaust Survivors."

(AJNews) – The Canadian Ethnic Media Association is presenting its 44th Annual Awards for Journalistic Excellence webcast on Thursday, November 17, 2022, at 7 p.m. ET and Alberta Jewish News reporter Maxine Fischbein is receiving one of the top honours.

Buoyed by the success of the last two year’s virtual production of its prestigious awards, CEMA returns this year with its third online presentation, bigger and better than ever!

This claim is easily validated by the record number of submissions received this year, and the high caliber of content and production of the many entries competing across nine categories.  It was a massive task for the jury to determine the winners.

The winners in each category will be announced at the event but Alberta Jewish News is proud to announce that Local Journalism Initiative Reporter Maxine Fischbein has been awarded first place in the category of Community Engagement for her coverage of the ‘Here to Tell: Faces of Holocaust Survivors’ exhibit in Calgary.

“I am thrilled to announce that Alberta Jewish News’ nomination of Maxine Fischbein for her coverage of the Here to Tell project, has been awarded first place in the category of Community Engagement,” stated CEMA chair Madeline Ziniak.

Here to Tell is a commemorative and educational photography and multimedia exhibit (with an accompanying book) that features both living and deceased Holocaust survivors who have a connection to the City of Calgary. The exhibit sheds light on each of the survivors’ Shoah (Hebrew word for the Holocaust) experiences, while also providing a glimpse into their lives lived post-war. 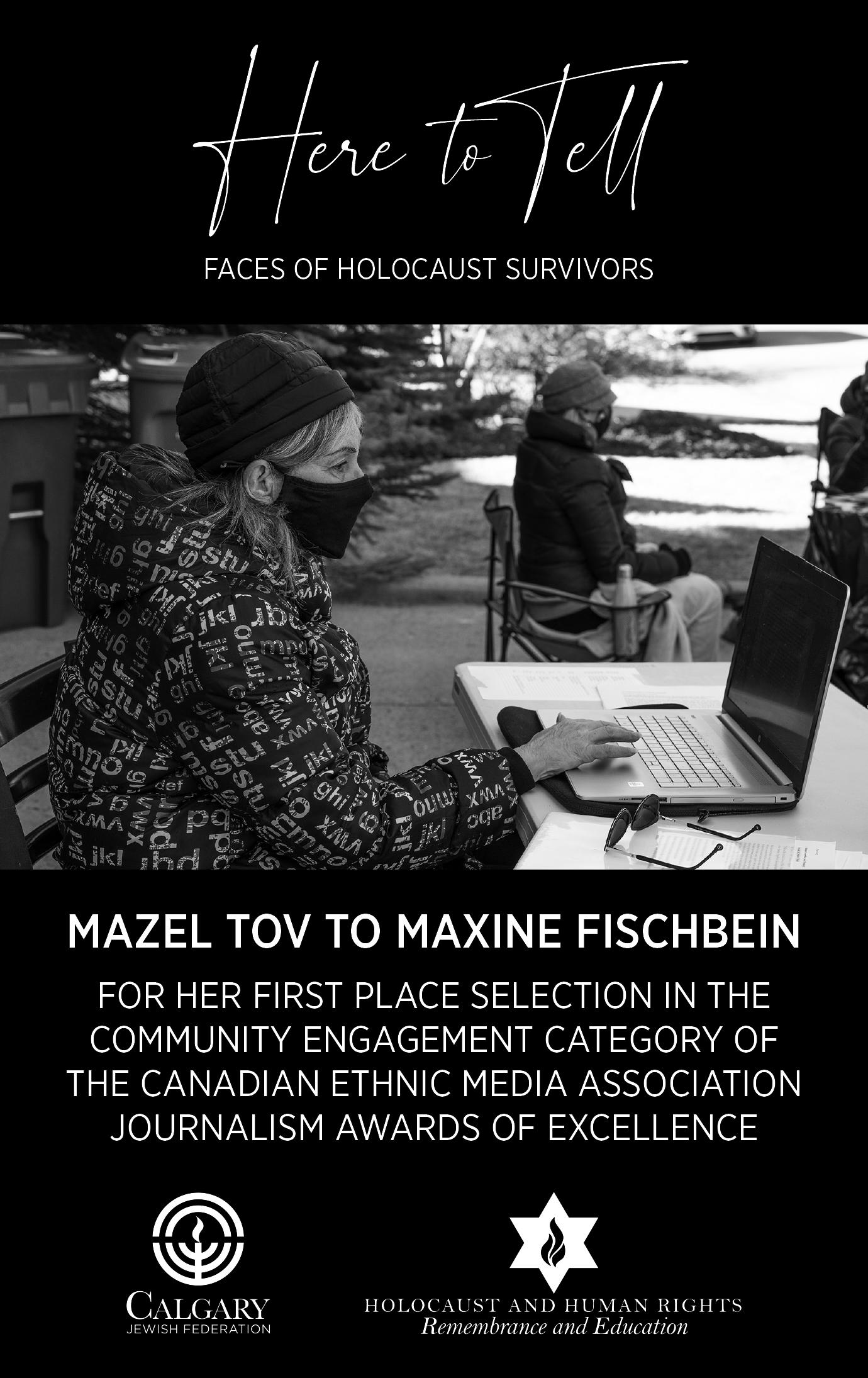 Alberta Jewish News reporter Maxine Fischbein’s coverage of and contribution to the exhibit from its inception forward was monumental, educational, and inspirational. She lent her expertise to every aspect of the project and her writing skill, compassion and commitment to community elevated the project.

“We are proud to have a reporter of Maxine’s caliber associated with Alberta Jewish News,” said Publisher Deborah Shatz. “Her exceptional character and her commitment to community make this award in the Community Engagement category all the more meaningful.”

“Having had the absolute privilege to work alongside Maxine on the Here to Tell, we could not think of anyone more deserving of this honour. Maxine brought tremendous talent, compassion and hard work to Here to Tell: Faces of Holocaust Survivors, and was instrumental in the project’s success, given her integral role as the lead writer and the senior editor. She worked tirelessly with the survivors, and their families, to illuminate each of their Shoah experiences, and so gently and thoughtfully documented the years of trauma and anguish, as well as their lives lived post war.

“Maxine approached this challenging task with grace and commitment, donating all of her services to the project, and never asking for any special recognition of her boundless contributions.

“We are deeply grateful to Maxine for all her hard work and talent in helping us share the stories and experiences of Holocaust survivors. Our community is indebted to you Maxine.”

The Canadian Ethnic Media Association asked Canada’s ethnic media to enter their best work, and they responded energetically! The independent panel of multilingual media experts screened all submissions before making their difficult decisions. The results present a truly national showcase of Canada’s best ethnocultural journalism from coast-to-coast – Vancouver to Halifax.

In its webcast, Thursday, November 17, 2022, at 7 p.m. ET, CEMA Awards co-hosts, Karen Johnson and Pauline Chan, will reveal the winners of the nine competitive categories, along with the winner of this year’s prestigious Sierhey Khmara Ziniak Lifetime Achievement Award.  Acceptance speeches will be broadcast including remarks by Maxine.  Visit:  www.canadianethnicmedia.com to meet the Winners!