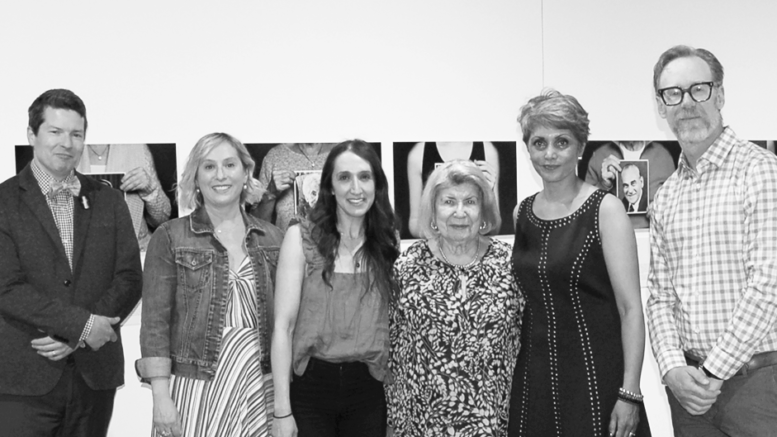 (AJNews) – By every measure, Here to Tell: Faces of Holocaust Survivors is a success, as affirmed by the crowds that gathered daily at the Glenbow at the Edison to view the exhibit and, often, to hear directly from Calgary Holocaust survivors or their descendants.

The exhibit, which was to have run from May 27 through July 3, was extended by the Glenbow Museum until July 17. As these words are written, tours are being organized for Calgary City Councillors on July 18 and 19.

Marnie Bondar and Dahlia Libin – co-chairs of Calgary Jewish Federation’s Holocaust and Human Rights: Remembrance and Education Department and executive producers of the exhibit, book and behind-the-scenes documentary – led an army of some 100 volunteers, a handful of professionals, and some generous philanthropists in producing what many are characterizing as one of the most important projects so far embarked upon by the Calgary Jewish Federation.

By July 3 a total of 9846 individuals had visited the exhibit, among them 1862 students and teachers from 17 Calgary and area schools, many of whom heard the personal testimony of Holocaust survivors Fanny Wedro and Sahbra Markus as well as next-generation descendants. B’nai Brith Calgary Lodge #816 generously underwrote transportation costs for participating schools.

At least 17 other groups totalling close to 500 individuals toured the exhibit.

The hardcover book sold out, but a limited number of additional copies have been ordered and can be pre-purchased on the Here to Tell website while supplies last. The books will be available in November.

The exhibit is expected to tour, with Libin and Bondar currently reviewing requests from museums and communities throughout North America. While the exhibit focuses on Holocaust survivors who made their home in Calgary, or were otherwise connected to our community, the images and stories shared in Here to Tell are universal.

“We hope that as the exhibit travels, local Jewish communities will add stories of their local survivors. We are all here to tell.” – Dahlia Libin

Calgary tours were provided by Bondar, Libin and next-generation volunteers including emerging leaders Don Schapira and LeeAnn Grisaru. Volunteers ranging in age from 6 to 94 ensured that the exhibit was a meaningful experience for visitors of all ages, stages and educational levels.

“Our volunteers literally ran the gamut,” Bondar said. “We had every generation represented. That was not purposeful. The whole thing was quite organic with the right people showing up, committing to intensive training and really getting to know the survivors’ stories,” said Bondar.

“Other descendants and friends who came to the exhibit were also phenomenal. Often they spontaneously engaged with other visitors, sharing their stories as if they were tour guides,” Libin said.

“Joel Horwitz’s family adopted Holocaust survivor Elliott Zuckier when he was brought to Canada as a war orphan by the Canadian Jewish Congress following the war,” said Marnie Bondar.

Horwitz’s parents, Cecil and Ida Horwitz, took Elliott in and he became a beloved part of the family. Joel Horwitz said Elliott – who shared his bedroom – became like a brother to him.

When Horwitz went to see Here to Tell, he related to others how Zuckier slept next to a photo of the crematoria chimneys at Auschwitz. That is because it was the closest thing Zuckier had to a family photo, most of his kin having been murdered by the Nazis at the notorious death camp.

“The power of hearing directly from a survivor or one of their loved ones brought the exhibit to life.” – Marnie Bondar

“Often those encounters were planned, but sometimes they just happened during moments of casual conversation. Those were emotional moments.”

Bondar and Libin say that they saw the pride building in the descendants, many of whom had never before publically shared their loved ones’ stories. They realized there was value and power in sharing their personal recollections of all the love and hope with which they were nurtured by parents and grandparents who had experienced hell.

While the bios throughout the exhibit recount the worst imaginable trauma and loss, they also focus on the collective will of Holocaust survivors to build family and community and work toward a better world.

Bondar says that many visitors gravitated toward the stories of Eva Davis, who literally sang for her life at Auschwitz; Nanette Konig, who was a classmate of Anne Frank’s; and Pearl Lang, who survived eight concentration camps and returned to Europe on several occasions to testify against Nazis accused of war crimes.

“There is a lot of pride in those women and so many other survivors in the exhibit whose experiences demonstrated resistance, either physical or spiritual,” Bondar said.

Many members of the general public had stories of their own to share. While volunteering as a docent, this writer met descendants of Polish partisans, survivors of ethnic cleansing in Rwanda, and descendants of Nazis, each with heart rending stories to share.

Very often, visitors to the exhibit found themselves overwhelmed by emotion. At least four fainted, and it was challenging to keep enough tissues on hand, especially during screenings of the Here to Tell documentary. After viewing the highly emotional film, visitors made a point of finding out more about the stories of featured survivors including Bronia and Sidney Cyngiser, Ann and Morris Dancyger, Benny Katz, Lea Kohn and Sahbra Markus.

Prominent Calgary homebuilder Avi Amir, who was born in Slovakia in 1942, was on hand on several weekends to share the stories of his parents’ survival. More than a few Calgarians were stunned to discover that the man who built their family homes had such a remarkable family history to share.

“Our whole community has embraced our Holocaust survivors as family. These people don’t just belong to their descendants. They are part of all of us. They do our community proud.” – Marnie Bondar

Pride was very much in evidence when students in grades 6-9 at The Calgary Jewish Academy toured the exhibit.

“They didn’t get a regular school tour. We concentrated on the images of many of their great-grandparents, and when they stood in front of those photos and read the tag lines and shared what they knew about their families, they were all jumping up and down with excitement and pride,” Dahlia Libin recalled.

According to Libin, CJA Principal Brenda English said that some students who are descendants of survivors committed themselves to learning more about their families’ Shoah experiences.

“We finished that tour in the front gallery where we all recited Kaddish,” recalled Bondar. “It was powerful.”

Great care was taken to provide historical and cultural context for students from other Calgary and area schools.

“In many cases, it was eye opening to us how little some of these students knew about the Holocaust,” reflected Libin, further noting that some were not familiar with the term antisemitism.

“It was great to see how engaged the students were, overall.”

Students from High River High School toured Here to Tell. Sadly, during the following week, graffiti including Jew hate and swastikas was discovered on picnic tables outside the school.

“The class came together, sanded the tables and painted flowers and butterflies in place of the hateful messages,” Bondar said.

Upon hearing that another school, this time in Southwest Calgary, had been experiencing issues with antisemitism, Holocaust survivor Fanny Wedro spent an entire week sharing her story with as many students and teachers as possible.

“Students listened attentively. Many were brought to tears and wanted to come up and meet Fanny,” recalled Libin. “The truth is that these students are among the last who will hear about the Holocaust directly from one of the survivors.”

Notably, a number of teachers who had visited Here to Tell with their students returned to the exhibit with family and friends.

After spending so much time with school groups, Bondar and Libin are now turning their attention to what the Holocaust Education Symposium will look like going forward, especially as the obligation to bear witness shifts from the dwindling community of Holocaust survivors to their descendants.

“There is nothing more powerful than hearing the personal testimony of Holocaust survivors. But we think we are building something extraordinarily meaningful with the participation of descendants, some of whom have very personal stories to share about their family members.” – Marnie Bondar

“The recorded testimony of many of our survivors will continue to be the linchpin,” Bondar said. “No matter what, they will remain front and centre.”

Survivors and descendants who had not previously participated in the project now want to become a part of Here to Tell. Photo shoots and interviews will be conducted late in 2022 so as to add additional survivors to the digital collection.

“The other thing we are very excited about is our new program, Here to Tell in the Classroom,” Libin said. “We have created two 90 minute presentations that can be targeted to students and teachers where we bring Here to Tell directly to the schools.”

The presentations begin with a historical overview of antisemitism. Presenters will also delve into what Jew hatred, racism and xenophobia look like today.

“We want to give teachers the tools to recognize the warning signs and help them empower students to respond as responsible citizens,” Bondar said.

At a Here to Tell volunteer appreciation event held on June 28, Glenbow Museum CEO Nicholas Bell – who was joined by frontline and behind-the-scenes Glenbow staff members – spoke of his admiration for the project.

“It was a no-brainer,” said Bell of the Glenbow Museum’s enthusiasm to share Here to Tell with Calgarians. “How could we say no? Our job as an institution is to connect people to other people, to be a storyteller. If there’s one exhibition that we could say explains the viewpoint and the experience of others, it is yours. And so, it’s the perfect project to bring to as many people as possible. It has been such an honour to work with you, to work beside you.”

“You have done a fantastic job. I think everyone recognizes that,” Bell concluded.

“Here to Tell is a call to action to the Jewish community and to society at large. The resilience demonstrated by the survivors and the meaningful contributions they have made to Calgary and Alberta life demonstrate that the past does not have to define us or what we can accomplish.” – Adam Silver

Silver told AJNews that Calgary Jewish Federation was proud to host community leaders with whom the organization has long-standing relationships, including members of the Calgary Police Service and the RCMP serving on diversity, anti-racism and local and provincial hate crime units.

“Marnie and Dahlia have set a high bar for Holocaust remembrance and education,” noted Silver, adding that the Calgary debut of Here to Tell is the “tip of the iceberg as to where this can go.”

“Here to Tell is an innovative and critical tool to ensure that the lessons of the Holocaust and the wisdom of survivors resonate with as many different groups throughout society as possible,” Silver added.

Libin and Bondar acknowledge that Here to Tell has now taken on a life of its own, becoming a lightning rod for talented young leaders who are dedicated to promoting Holocaust remembrance and Jewish pride going forward.

“We take huge comfort in knowing that Holocaust education will remain robust in Calgary for many years to come.” – Marnie Bondar

Toward that end, Bondar and Libin have once again invited acclaimed Holocaust educator and author Ben M. Freeman to address Calgarians, this time in person, downtown at the Calgary Public Library on November 10. The following evening, Freeman – the Hong Kong-based author of Jewish Pride: Rebuilding a People – will speak to Jewish young adults.

To find out more about Here to Tell or to order your copy of the book, go to heretotell.com.  For more information about Holocaust remembrance and education programs, go to jewishcalgary.org.

Be the first to comment on "Here to Tell exhibit attracts close to 10,000 visitors in Calgary"