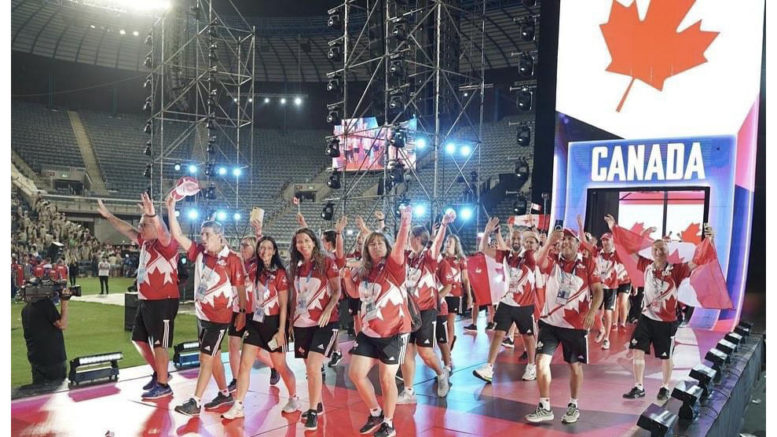 (AJNews) – For three weeks every summer from the age of eight to 15 I attended Camp Hatikvah in the Okanagan, British Columbia. One of the most anticipated times of camp was Maccabiah, a highly spirited, competitive three-day sports event. By the end everyone had lost their voices from cheering so loudly. In a call and response, we yelled: “Who’s gonna win Maccabiah? We’re gonna win!”

It was years later when I learned that the camp’s Maccabiah was modeled after a real version. The Maccabiah Games are the third largest multi-sport event by number of competitors, after the Olympics and the Asian Games, held every four years in Israel since 1932. Featuring all of the Olympic sports, as well as chess, cricket, netball, and futsal, it hosts 10,000 Jewish athletes from 70+ countries and Israeli citizens of all religions. There are also quadrennial Maccabi Games in Pan-America, Europe and Australia. 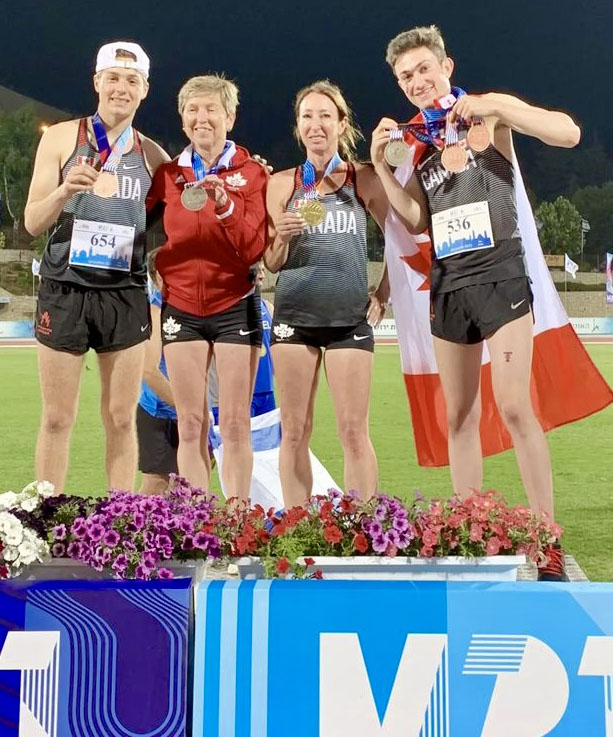 The Maccabiah Games are named as an homage to Judah Maccabee. In 166 BCE, he led an army of Jewish rebel warriors to overthrow the Seleucid Empire, which had issued decrees forbidding Jewish religious practice and forcing the worship of Greek gods.

After spotting a poster in the Calgary Jewish Community Centre last summer promoting the 21st Maccabiah Games, I set my intentions to go. Yalla! I was named to Team Canada’s track & field open division to compete in the 10K road race in Jerusalem. This would be my second trip to Israel since Bilium 1989.

Once the 600-member Canadian delegation arrived in Israel – the junior village was located in Haifa, the masters in Netanya, and the open athletes in Jerusalem – the Maccabiah Games officially began on July 14, 2022 with the Opening Ceremonies in Jerusalem’s Teddy Stadium. I’m proud to say that the diaspora is strong and thriving and it was thrilling to meet Jews from India, Uruguay, Kyrgyzstan, and The Bahamas.

Our flag bearers were Calgary twins Nick and Conaire Taub, outside hitters for U18 men’s volleyball (silver). This was the brothers’ second Maccabiah after being bar mitzvahed at the Kotel at the last Games. The third flag bearer was Toronto’s Molly Tissenbaum, goalie of open women’s hockey (gold), making its debut at Maccabiah. Tissenbaum had previously competed at Maccabiah in softball.

Esh, the torch was lit, and we proudly sung Hatikvah. Later in the ceremonies we solemnly observed Israel’s fallen soldiers, the Israeli athletes murdered in the 1972 Munich Summer Olympics, and the four Australian athletes who were killed when a temporary bridge collapsed on their walk into the Opening Ceremonies in Tel Aviv at the 1997 Maccabiah Games.

Calgary twins Nick and Conaire Taub and Molly Tissenbaum were the flag bearers for Team Canada at the July 14 opening ceremonies for the 21 Maccabiah Games in Israel. (Photo Maccabiah Canada).

High up in the stands in a popemobile-like enclosure were Israel’s President Isaac Herzog, Prime Minister Yair Lapid, and US President Joe Biden. Biden spoke with the 1,400-member US delegation before the ceremonies; he is the first US president to attend Maccabiah.

The next night, the first Shabbat of our trip, two rabbis and their families led the service at our hotel for the athletes. Originally from Los Angeles, Rabbi Menachem Solomon gave a sermon about four rabbis debating what the most important line was in the Torah. The fourth rabbi said it was when a man took a goat to be sacrificed every day, once in the morning and then again in the evening. “It’s about the value of consistency,” the rabbi explained. Success in all things comes from consistency. You don’t practice your sport only when you’re in the mood or when the weather suits you. You will reap rewards from the devotion to your task. 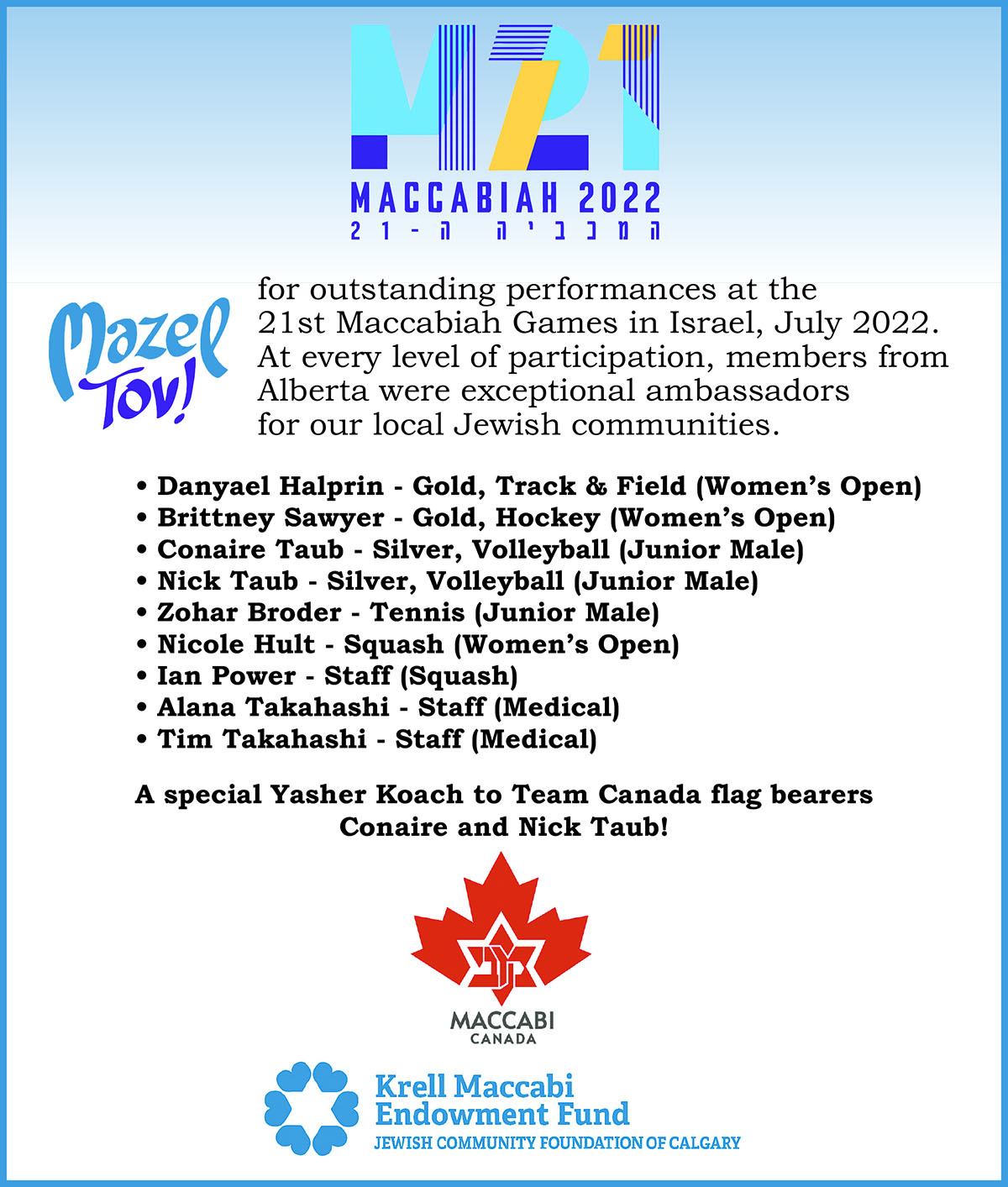 My track team was a motley crew, ranging in age from 19 to 71 and competing in distances from 100 metres to the half marathon. But somehow we worked; we became a team, dare I say, a family, cheering each other on and looking out for each other. We were lucky to have Chartered Performance Coach John Stevenson of Ontario to juggle our different needs and navigate the typical Israeli balagan to get us to our respective start lines. In addition to being a National Starter, Stevenson is the new head coach of cross-country at Fanshawe College in London, Ontario.

Our roles quickly became defined. University of Toronto’s Ben Shore supplied the melatonin and won the most medals (3); Toronto’s half marathoner Vadim Gouterman did excellent race route recon; Toronto’s Nathan Beber, a second year student in the sport management program at the University of Michigan, was the mensch and youngest member of the team.

My new BFF is Toronto’s Phyllis Berck, a marathon champ who competed in the Maccabiah 10K. Berck worked for five years with the Calgary Olympics Organizing Committee, the 2015 Pan Am Organizing Committee, and was the chair of national women and sports organization CAAWS. She was cheered on by her husband Bruce Kidd, the 1964 Summer Olympics runner who regaled us with stories about sports, history, and his work in advocating for athletes’ rights in gender, racism, homophobia, and transgender, for which he was made an Officer of the Order of Canada in 2014.

Meanwhile, we were all catering to the icing needs of our diva sprinter Alex Manuel of Ottawa for his injured hamstring. It was so worth it after witnessing him blaze a 10.95 PB in the 100 metres, earning him a spot on the world ranking and in the top 100 fastest in Canada. The 100 and 200 metre winner was Israel’s Blessing Afrifah who went on to win the 200 metre (19.96) at the World U20 Championships in Colombia on August 4.

In a beautiful gesture of sportsmanship, our 4×400 metre relay of Beber, Manuel and Shore invited Ukrainian runner Nikita Averliukov to be their fourth. In fact, at dinner on the first night at our Jerusalem hotel, the packed dining room gave the small Ukrainian contingent a tearful standing ovation. Unfortunately, Averliukov and Manuel had to scratch due to injuries sustained in the 200 metre final, but our new international open entry included two Americans resulting in a bronze medal. 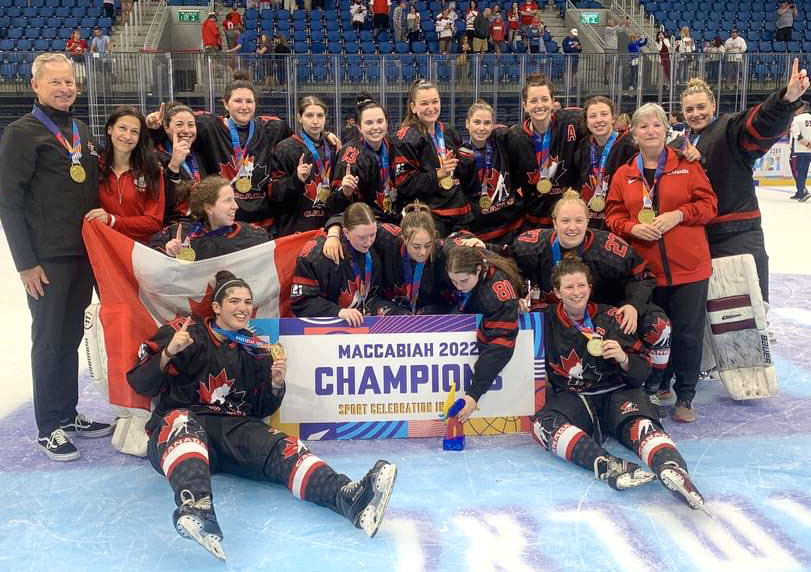 “I loved the way the Maccabiah movement brings together Jewish people from all over the world who love sport,” says Kidd. “I saw the cultural intermingling and the exchange of ideas, experiences and sporting tips regardless of country being lived every day under the banner of Maccabiah with this tremendous sense, for the most part, of secular Zionism.”

On Monday, July 18, my race began near the Israel Museum at 8:30 p.m. after the sun’s mighty rays had set. The Maccabiah 10K was part of the Jerusalem Night Run and we were positioned right at the start as elite athletes. A DJ and drummers entertained the crowd, and minutes before the start American Maccabiah runner Jordan Schilit proposed to his girlfriend. Her ‘Yes’ fuelled him to a second place finish after the South African. Our Ben ‘The Shore Thing’ crushed the race to win bronze.

Jerusalem is hilly and the 10K was unforgivingly undulating with a total elevation of 361 metres. At kilometre 3 the hill was akin to Banff’s Tunnel Mountain Drive times two in length, triggering my hill PTSD from Melissa’s Road Race. Memorable moments were running through Jaffa Gate into the Old City along the polished cobblestone and passing by the busy plein air cafés. Right before Jaffa Gate I tripped, for the first time in a race, but didn’t fall and immediately bounced back up. Later we joked that I’d gone down to touch the holy ground.

Running through Sacher Park in central Jerusalem, I crossed the finish line 8th out of 662 women and 2nd Maccabiah woman. Two nights later at Givat Ram stadium I stood on the podium draped in the Canadian flag and to receive the gold medal for placing first in my masters age group.

At Games’ end Israel was the biggest winner with 500 medals, followed by the United States then Argentina (when they weren’t singing they were winning their soccer games). Canada won 55 medals.

On the last afternoon of July 25, a team clothing trading frenzy broke out among the countries in the hotel lobby. It continued well into the night at the Closing Ceremonies in Tel Aviv where there was a concert featuring Israel’s hottest pop stars, including Noa Kirel. I traded my delegation clothing for team gear from Argentina, Australia, Holland, and Israel. Shore scored big time, acquiring the Colombia soccer jersey #69.

For Maccabiah World Union, its hope is that the Games will strengthen the participants’ Jewish identities, ties to Israel and perhaps even inspire us to make aliyah. Maccabiah will forever have a piece of my heart. While I’m not currently planning on making aliyah, I do hope to return to Israel soon. I already miss the fresh halva. BaShana HaBa’ah.