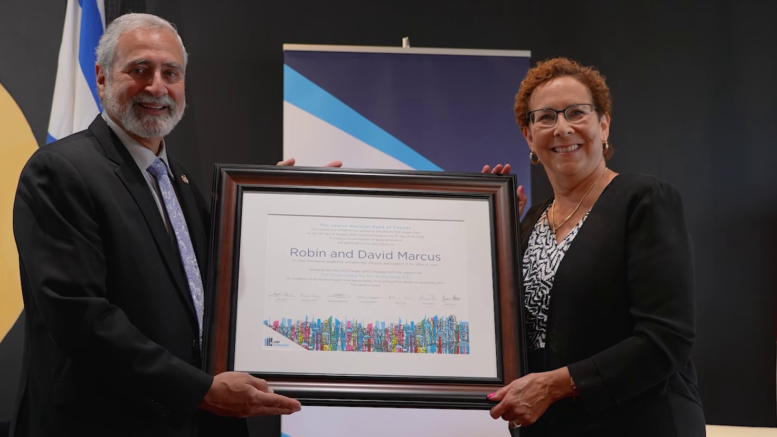 (AJNews) – JNF Edmonton honoured Robin and Dave Marcus at the 2022 Virtual Negev Gala on August 18 with an outpouring of love, respect and appreciation – combined with a whole lot of humour!

Generally, Negev Gala honourees are surrounded by friends and family at a fancy dinner and there is an outpouring of well-wishing in the room. This year JNF Executive Director Jay Cairns, Reel Mensch Studios president Jared Paull and Negev co-chairs Gaylene Soifer and Jeff Rubin were faced with a daunting task – to show the love that the community feels for Robin and Dave in a virtual event. They definitely rose to the occasion!

Robin Marcus is a beloved Talmud Torah School teacher who has been teaching for 30+ years and has had a positive impact on generations of Edmonton’s Jewish students. Outside of her loving family and friends, her passions are the school, the Beth Israel shul and her Na’amat family. Robin’s energy level seems to have no limits when she is volunteering her time and talents and her commitment is unparalleled.

Heartfelt testimonials were given in the school playground by current students, parents, former students who are now parents, colleagues and former students who are now colleagues. One by one, community members ranging in age from 6 to 60 explained why they love Robin. Mostly for her kindness and also because she taught them Hebrew and about the Jewish holidays and what it means to be Jewish. Robin is a true community builder and student by student she has taught yiddshkeit and menchlichkeit to two generations of Edmontonians.

The outpouring of respect and admiration was abundant for Dave too. Members of the Chevra Kadisha praised his character and his work ethic. The overwhelming consensus was that Dave has a very special blend of kindness and commitment that makes him invaluable when helping people navigate funeral plans while they are grieving from recent loss. Most of them could not imagine the Chevra Kadisha operating without Dave.

Both Robin and Dave are revered for their good-natured volunteering for many of the community organizations in Edmonton.

In addition to the moving testimonials, Jay and Jared called upon prior Negev honourees to touch base on how life has been treating them since their events. The ensuing clips were hilarious – Jacob and Odette Masliyah and Lew and Freya Wasel gave magnificent performances spoofing the glamorous life of award winners – inflated egos and all. Odette says to Jacob, “Robin and Dave are very deserving of this honour, they’re so nice.” Jacob is quick with his retort, “for now…” suggesting that the honour will go to their heads too.

Lew barks orders to Jay, his new driver to take him to Starbucks and when the order is slow he says, “Don’t they know who I am?”

The humour continues with Annie Sobel doing a delightful parody of her mom Robin and Max Marcus featuring the amazing clothing and hat stylings of Dave. They both provide laugh out loud moments.

The event is emceed by Mike Sobel, who can’t help but gush about the special relationship that he and his wife Jane share with the Marcus’s – they are machatunim and they share the joy of their first grandchild Rayna.

Robin and Dave chose the The Clore Centre for Performing Arts in the Galilee as their Negev project. The project is perfectly aligned with their philosophy of peace and inclusivity. The Clore Centre is the only facility in Northern Israel whose mandate includes promoting co-existence by bringing students together from all backgrounds to create and make music together. Robin excitedly explained that the Centre is located in the Northern Galilee pan handle, part of the partnership2gether area that has been twinned with the Jewish Community of Edmonton. She said that students from that region have been paired with students from Talmud Torah for years as pen pals and visiting one another during grade 9 class trips. One of the students who visited Edmonton during a recent exchange is actually now a student at the Clore Centre, she said, sharing that that student had been to their home in Edmonton. It’s a personal connection, for Robin and one that she cares deeply about.

Musical interludes during the Negev Gala were by students of the Clore Centre performing songs that were known to be favourites of Dave and Robin’s, capping off a wonderful event.

Viewing the gala, honouring Dave and Robin was enjoyable and moving but what truly made the event special was a little box in the corner of the screen, where we could watch the honourees react to each part of the tribute in real time. They were immensely touched and honoured by every moment! Kol Hakavod to Jay and Jared and everyone involved in the production and yasher koach to the Marcus family.