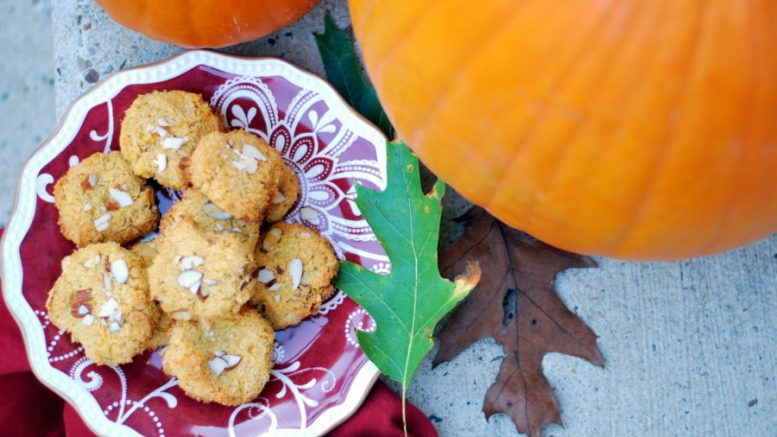 (The Nosher via JTA) — In the fall, we see pumpkin everywhere. Sometimes it goes overboard into foods in which pumpkin doesn’t belong. In this recipe, though, it adds a subtle creaminess and does double duty to moisten the (sometimes) dry macaroons.

Not to mention, pumpkin has some nutritional value. It is a good source of vitamins and dietary fiber — we all need that in our desserts, trust me.

I shaped them more like cookies because they seem to bake more evenly. If you like them with more of a crunch and less of a chewy center, just flatten them out more. Once you let them cool out of the oven, they will crisp right up. I topped mine with crushed, sliced almonds, but feel free to substitute with pecans or, even better, pumpkin seeds.

Directions:
Preheat the oven to 350 F. Line a baking tray with parchment paper.

In a double boiler (place a small amount of water in a saucepan, and put a bowl on top. Put the heat on low and the steam will gently cook), whisk the egg whites until foamy. Add sugar and keep whisking until you get soft peaks (the egg whites can almost hold shape on the tip of your whisk and then melt again) and the sugar has melted.

Take coconut and corn starch mixture and add the maple syrup, pumpkin puree and combine gently. Fold in egg whites gently until everything is evenly combined.

With a tablespoon, form cookies and place an inch apart on a cookie sheet. Top with nuts of your choice.

Bake for approximately 25 minutes, or until golden brown on the edges. Remove and allow to cool (they will crisp up even more).

(Sandy Leibowitz trained at the Culinary Institute of America and worked at top non-kosher restaurants in New York City such as the Russian Tea Room and Spice Market. Visit her at www.thekoshertomato.com and on instagram @thekoshertomato.)