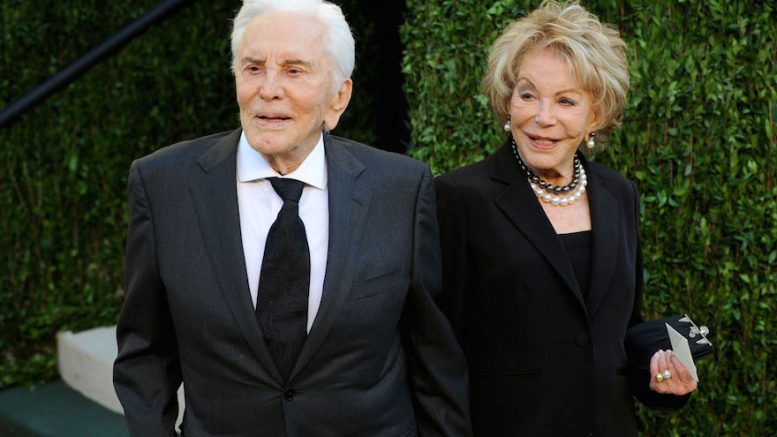 LOS ANGELES (JTA) – Kirk Douglas — actor, director, producer, author, philanthropist and Torah student — is celebrating his 100th birthday on Friday, and there is a special treat in store for the centenarian.

Douglas has been under strict medical orders to abstain from alcohol, but his cardiologist, Dr. P.K. Shah, promised the actor that if he made it to 100, he could have a glass of vodka. So at an afternoon tea party at an event space in Beverly Hills, Shah will be in attendance to personally administer the medication.

Some 150 other guests will fete Douglas, ranging from his extended family, including three sons and seven grandchildren, to old friends like director Steven Spielberg, Jeffrey Katzenberg, Don Rickles and other Hollywood luminaries.

Also on hand will be Rabbi David Wolpe of Sinai Temple in West Los Angeles, who has directed Douglas’ weekly Torah studies for many years. Wolpe also officiated at the actor’s second bar mitzvah, when Douglas – then only 83 – declared, “Today, I am a man.”

Hosting the event will be Kirk Douglas’ son, Oscar winner Michael Douglas, and his wife, actress Catherine Zeta-Jones, who will also welcome leaders of numerous charities and institutions in the United States and Israel that have received approximately $118 million over the years from Douglas and his wife, Anne.

“You have to give back,” Douglas once explained. “I came from abject poverty. I didn’t dream of becoming a millionaire. So you have to pay back.”

On Dec. 9, 1916, the future Kirk Douglas was born in the upstate New York town of Amsterdam as Issur Danielovitch, the son of an illiterate Russian-Jewish immigrant who supported his family of six daughters and one son as a rag picker and junkman. His rise to one of Hollywood’s top male stars in the 1950s and ‘60s is the stuff of American legend.

In most of his 87 movies, the blond, blue-eyed boy who once laid tefillin every morning was now cast as  just about the toughest, roughest guy around. But this is only part of the story. Douglas is the author of 11 books, including harsh childhood recollections, explaining the Holocaust to children and love verses to his wife, as well as tracing his recovery from a helicopter crash, stroke and attempted suicide.

Douglas is now reading the proofs for his 12th book, co-authored with his wife and titled, “Kirk and Anne: Letters of Love, Laughter and a Lifetime in Hollywood.”

With all these accomplishments, ask Douglas about his proudest recollection and he will point to his act of moral courage in breaking the Hollywood blacklist of alleged communists during the McCarthy red-hunting era. He did so by insisting that the name of writer Dalton Trumbo, who had been blacklisted for a decade, be publicly credited for the “Spartacus” screenplay, despite warnings that such a provocation would end Douglas’ own Hollywood career.

Most of his old friends who will attend the party are familiar with another of the actor’s talents — for pithy observations on life, love and advice to future generations.

On religious observance: “I don’t think God wants compliments. God wants you to do something with your life and to help others.”

On the appeal of Torah study: “The Torah is the greatest screenplay ever written. It has passion, incest, murder, adultery, really everything.”

In his heyday, when Douglas was as famous for his egocentricity and womanizing as his screen roles, he spared little time and interest for his Jewish heritage. However, he observed, “I always fasted on Yom Kippur. I still worked on the movie set, but I fasted. And let me tell you, it’s not easy making love to Lana Turner on an empty stomach.”

Kirk was upstaged by his second and current wife at the celebration of their 50th wedding anniversary in 2004. The former Anne Buydens startled the guests by announcing that she had converted to Judaism.

“Kirk has been married to two shiksas,” she declared. “It’s about time he married a nice Jewish girl.”

Douglas has always had a special spot in his heart for Israel. In “The Juggler,” he starred in the first Hollywood feature to be shot in the Jewish state, returning later for “Remembrance of Love” and “Cast a Giant Shadow.”

Shortly before his 100th birthday, Douglas recalled a blessing he first pronounced on his 9oth birthday.

“In the Jewish tradition, a birthday gives a person special powers and if he issues a blessing, his blessing will come true,” he said.

“I bless all the people in the land of Israel that the current conflicts resolve themselves, that no more people die or are hurt, and that you can continue your lives in peace.”

Be the first to comment on "Kirk Douglas, on his 100th birthday, looks back — and ahead"