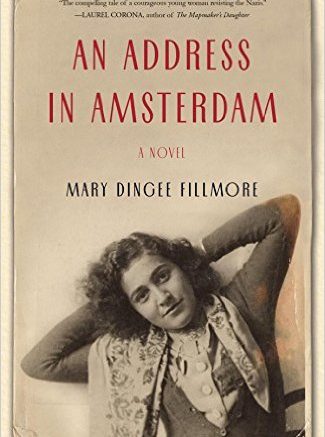 (EJNews) – What was it like to be a young Jewish woman living in Amsterdam during World War II? Author Mary Dingee Fillmore does a remarkable job of answering that question in her beautifully written new release “An Address in Amsterdam.” She paints a picture of the daily life in the Netherlands from the beginning of the Nazi occupation in 1940 through to 1943 at the height of deportations and Dutch collaboration.

The author introduces us to Rachel Klein, an ordinary 18-year-old Jewish woman who is living in extraordinary times. She and her friends and family do their best to ignore the Germans who have taken over their city but one by one they are drawn into the horror of the occupation. Rachel’s father remains in a state of denial while she and her mother face mounting concerns. When Rachel’s non-Jewish (and secret) boyfriend is forced to flee rather than face arrest as a result of his involvement with the underground, Rachel knows that she too must get involved.

Participating with the underground is a cathartic experience for Rachel and although she is often tired and scared, she delivers papers under the Nazis’ noses. But after eighteen months of ever increasing danger, she pushes her parents to go into hiding with her. From that point on, their world is reduced to a basement hiding place.

The author pays close attention to detail in this well-crafted story that takes Rachel from an era of normalcy into an atmosphere of unimaginable cruelty and hate. The landscape of Amsterdam is described meticulously both geographically and politically.  Mary Dingee Fillmore spent thirteen years researching “An Address in Amsterdam” and her authentic narrative makes the story all the more chilling. The smells, the sounds and the sights are poetically and precisely portrayed.  The vivid story that comes alive in the pages of her book is a result of this research.

“An Address in Amsterdam” is not merely an historical slice of life into one of the world’s most terrifying eras, nor is it a simple coming of age story for our courageous Rachel. It is all that and more, as the author carefully paints a sensitive character portrayal of many of the people with whom Rachel interacts. She unwraps the layers upon layers of multiple characters to give the reader a full sense of many different Netherland perspectives – both Jewish and non-Jewish. At the same time, she tenderly describes changing relationships and different kinds of love and emotional attachments.

When describing the impetus for her book, Fillmore explains, “My life changed in 2002 when I found out that Jewish people had been hidden in a house where we were staying in Amsterdam. They were last seen trying to escape over the rooftops while Nazis shot at them…For years, I’ve been researching, visiting and exploring to learn about the city as it was then – and how Gentiles like me helped their Jewish neighbours or didn’t.”

“An Address in Amsterdam” shows that, even in the most hopeless situation, an ordinary young woman can make the choice to act with courage ― and even love. As readers, we can’t help but be transported into that horrific era and ask ourselves how we would react in those circumstances. And then we must look at the injustices that we face every day even in 2016 and ask ourselves : Am I a quiet observer, a collaborator, a victim, a bully, a denier or an active advocate for human rights?

“An Address in Amsterdam”  (ISBN-13: 978-1631521331) is well written and easy to read and it gives readers plenty to think about and discuss. It has a few love scenes so it is not recommended for children. It is available through Amazon and other booksellers both in kindle and paperback.

1 Comment on "Book Review: An Address in Amsterdam by Mary Dingee Fillmore"