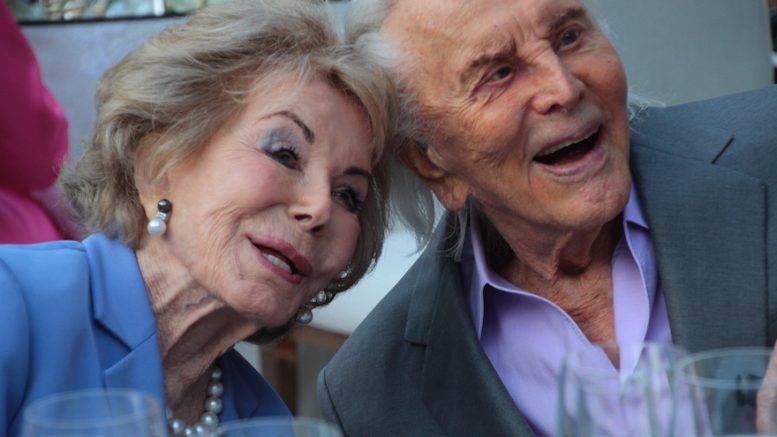 Kirk and Anne Douglas at their 60th wedding anniversary in 2014. (Christopher Briscoe)

LOS ANGELES (JTA) — When movie star Kirk Douglas married Anne Buydens in Las Vegas, the justice of the peace asked Anne to raise her hand and repeat after him, “I take thee, Kirk, for my lawful husband.”

Anne, who had recently arrived in the United States from Europe, raised her hand and proudly proclaimed, “I take thee, Kirk, as my AWFUL husband.”

At the time, the mispronunciation was not too far off the mark. In Hollywood, the handsome, muscular actor was already notorious for his inflated ego and the endless parade of women — from movie queens to casual pickups — whom he bedded at a record pace.

Four years later, in 1958, Kirk was away shooting a movie when he wrote to his wife, “If I live to be 100, there will still be so many things unsaid.”

Douglas celebrated his 100th birthday on Dec. 9, 2016. And he sent a follow-up note, “As I have now reached that milestone, I can attest that it is still true.”

Both declarations are included in the couple’s newly published book, “Kirk and Anne: Letters of Love, Laughter and a Lifetime in Hollywood,” which was written with Marcia Newberger. The book, which is Kirk’s 12th and Anne’s first, draws upon the couple’s decades of correspondence to chronicle the ardent, if sometimes stormy, relationship between the two strong personalities — he the son of a hard-drinking Jewish immigrant ragman and junk collector, she the daughter of a prosperous German family.

The enduring bond between the Douglases is palpable to a reporter who recently visited the couple at their spacious but not ostentatious Beverly Hills home for an interview.

During the lively conversation, Anne, 98, reminisced that while living in Europe, “my dream had always been to come to the United States, the country that had everything.”

Asked whether her vision of America had been fulfilled, Kirk, with his characteristic dry humor, quickly interjected with a smile: “Sure, she married a rich movie star.”

Throughout his long film career — during which he has appeared in some 90 movies — and the couple’s 63-year marriage, Kirk was away frequently for long periods on location shoots. But the husband and wife wrote to each other constantly, using paper stationary even as the era of email set in.

Anne kept every letter the couple exchanged, along with an impressive cache of photos. One stack she preserved in the couple’s temperature-controlled wine cellar in the Beverly Hills home; another was secreted away in the couple’s bedroom in their second home in Montecito, on California’s coast.

The memoir is a complication of the couple’s letters and photos. In its 221 pages, the reader learns about their love life, including Kirk’s infidelities, and is treated as well to some graphic accounts of the affairs of other Hollywood stars.

But that’s only part of the book. The pair befriended several U.S. presidents and their wives, from John and Jackie Kennedy and Lyndon and Lady Bird Johnson to Ronald and Nancy Reagan and Barack and Michelle Obama.

The Douglases, of course, also played and worked with Los Angeles’ rich and famous. They cast a frequently jaundiced eye on the predominantly Jewish — and often imperious – magnates who dominated Hollywood, in a time before studios transformed into bland corporations.

Anne addressed her love letters to Isidore or Izzy; Douglas wrote back to Stolz. Thereby — like almost every other entry in the book — hangs an intriguing backstory.

Kirk’s father was named Hershel Danielovitch, but upon arriving in New York from Russia, he Americanized his name — sort of — to Harry Demsky. When his son entered St. Lawrence University in northern New York state on a wrestling scholarship, he enrolled as Isidore Demsky. Kirk was usually called Izzy by his friends, a salutation adopted later by his wife.

Anne’s family had left Germany shortly after the Nazis came to power; she was living in Brussels when the German army invaded Belgium. With the help of a friend, Albert Buydens, she escaped by car to France, where the two joined in a marriage of convenience and she was able to gain Belgian citizenship.

A multi-linguist, Anne quickly found public relations work in the French movie industry; she also was a writer of movie subtitles. When Kirk, who had divorced his first wife, actress Dianne Dill, came to Paris in 1953 to star in “Act of Love,” he met Anne, who was pretty, brainy and divorced.

Though he was already engaged to Italian-American actress Pier Angeli, Kirk made a play for Anne and immediately asked her out for dinner. He was stunned when she declined this and subsequent invitations. That’s when Kirk started to label her “Stolz” —  a German word usually translated as “proud,” but also means “stubborn,” according to Anne.

In 2003, after 49 years of marriage, Anne decided, on her own, to convert to Judaism under the tutorship of Rabbi David Wolpe of Sinai Temple in West Los Angeles. During the interview, she described her mikvah experience.

“After removing all nail polish, I entered the swimming pool and put my head under the water,” she recalled. “I came out looking like a wet dog – but I was Jewish.”

She announced her new status at a large party marking the Douglas’s 50th wedding anniversary.

“Kirk has been married to two shiksas,” she said at the time. “It is time he got a nice Jewish girl.”

One immediate impact was that Kirk — who had lit Friday evening candles at their home throughout the marriage — now transferred the honor to his wife.

Over his life, Kirk has developed his own definition of Judaism.

“I grew up praying in the morning and laying tefillin, but I gave up much of the formal aspect of religion,” he said. “I believe in G-d and I’m happy to be a Jew. But I think too much religion has not helped civilization. Caring for other people is my religion.”

The couple has put these words into action. The Kirk and Anne Douglas Foundation has contributed some $120 million to charitable projects, among them numerous playgrounds for poor communities in the United States and Israel.

Kirk learned about anti-Semitism early on, he said. His father couldn’t get a job at the local mills because they didn’t hire Jews, and young Issur was turned down for a newspaper delivery route for the same reason. And when he was elected class president at St. Lawrence College, a major donor threatened to withhold major donations unless the election result was nullified.

Even as a bona fide movie star, Kirk — along with the likes of Walter Matthau, Peter Lorre and Billy Wilder — could not escape prejudice in the 1950s and ’60s.

As Kirk writes in the book, “Sometimes it was easy in Hollywood to forget that anti-Semitism, polite or overt, was still mainstream. Jews ran the major studios. With Anglicized names and beautiful blonde shiksas replacing their starter wives, they lived like the wealthy WASPS of their movies: entertaining lavishly at their grand estates; presiding over screenings in projection rooms hung with museum-quality art; voting Republican.”

In the mid-1950s, Kirk formed his own independent production company, naming it Bryna, in honor of his mother, who also gave birth to six daughters. Among the company’s first productions were “Paths of Glory” and “Spartacus,” arguably Kirk’s most famous film.

In the book, Kirk recalls the time he took his mother to one of his film premieres, with the words “Bryna Productions Present” high up on the marquee. When the mother saw her name in bright lights, she turned to her son and whispered in Yiddish, “Isn’t America a wonderful country?”

Be the first to comment on "Kirk Douglas: How the 100-year-old found true love"