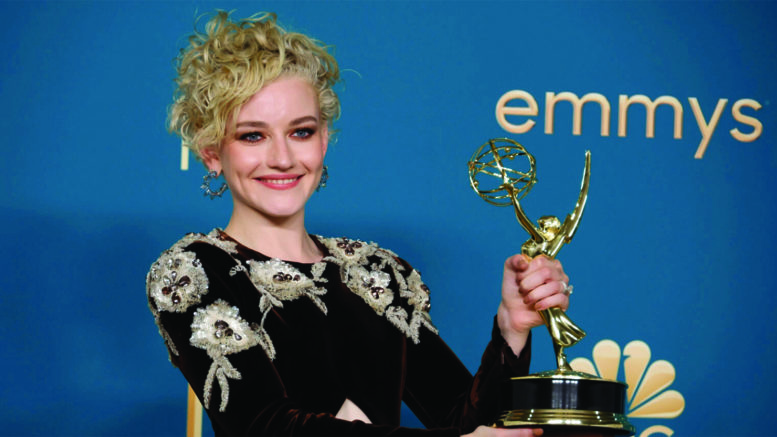 Julia Garner with her Emmy in the press room at the Microsoft Theater in Los Angeles, Sept. 12, 2022. (Frazer Harrison/Getty Images via JTA)

Garner scored her third win for best supporting actress in a drama for her role on Netflix’s crime show “Ozark,” which concluded its run this year. She previously won in 2019 and 2020 for the same show and was additionally nominated this year in the limited-series category for “Inventing Anna” but lost that category to Amanda Seyfried in “The Dropout.”

During her acceptance speech, Garner thanked the “Ozark” writers for crafting her character, whom the actor said “has changed my life.”

Goldstein, also a repeat winner, scored his second award in a row for best supporting actor in a comedy for his role in Apple TV+’s sports sitcom “Ted Lasso.” Thanking his Jewish family back home in Britain, the famously foul-mouthed Goldstein promised not to swear — before dropping an f-bomb on live television.

NBC’s “Saturday Night Live,” whose creator and longtime showrunner Lorne Michaels is Jewish, extended two of its records in the outstanding variety/sketch series category: the most wins and the most consecutive wins (which now stands at six). The show only had one other competitor in the category.

During his acceptance speech, Michaels thanked his cast for “showing up” in the midst of a pandemic, which had resulted in one live broadcast of “SNL” airing without an audience. The series’ longest serving cast member, Kenan Thompson, also hosted the evening’s awards ceremony.

Two of the most visibly Jewish shows on TV, Amazon’s “The Marvelous Mrs. Maisel” and HBO’s “Curb Your Enthusiasm,” were both blanked out of the big categories this year. Both were nominated for best comedy but lost to “Ted Lasso,” while “Maisel” also lost every acting award its stars were nominated for. Other Jewish stars who came away from the night empty-handed included Seth Rogen, Henry Winkler and Andrew Garfield.

Zendaya won best lead actress in a drama for “Euphoria,” the popular HBO teen drama based on an Israeli show.