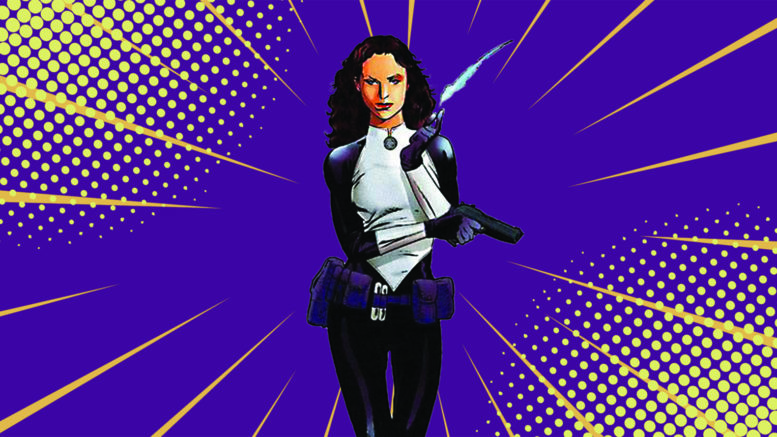 The Marvel character Sabra first appeared in a comic strip in 1980. (Wikimedia Commons/Design by Mollie Suss)

(JTA) — In a move that is already thrilling some Jewish audiences and stirring controversy among other international fans and activists, Marvel Studios announced that an Israeli comic book hero will appear in the next installment of its Captain America movie franchise.

“Captain America: New World Order,” which is set for release in 2024, will feature Israeli actress Shira Haas as Sabra, a hero who debuted with a cameo in a 1980 “Incredible Hulk” comic and appeared as a full character the following year in a strip set in Israel titled “Incredible Hulk: Power in the Promised Land!”

Since the details of Marvel projects are kept under tight wraps until their release, it is not known how prominent Haas’ character, the first Israeli to appear in the Marvel Cinematic Universe, will be in the film. Between 1980 and 2019, Sabra appeared in 50 issues, according to a Marvel fandom page.

Sabra (also the word for an Israeli prickly pear, which has a bristly outside and soft and sweet inside, and is used as a nickname for an Israeli person) is a Mossad agent and police officer with superhuman speed and strength. The 1981 comic that first prominently features her involves multiple quotes and plot points that would be seen as taboo in a contemporary Hollywood blockbuster.

Sabra will be in CAPTAIN AMERICA: NEW WORLD ORDER.

We will be living in a world with a live action Sabra in the movies.

I never saw that coming. pic.twitter.com/4iLEBb06wT

In the comic, the Incredible Hulk mistakenly ends up in Tel Aviv, where he befriends an Arab boy who gets killed in an attack by identifiably Arab terrorists. Sabra — real name Ruth Bat-Seraph — witnesses the attack and assumes Hulk is in cahoots with the terrorists. She attacks Hulk with “energy quills,” weakening him, but the Hulk explains that the boy was his friend — and references the Israeli-Palestinian conflict.

The introduction of the character first announced last week at the Disney D23 expo in Anaheim has already received backlash online. Some on social media have argued that the character is an example of Israeli military propaganda or used it to criticize the Israeli government’s treatment of the Palestinians.

Israel’s Marvel superhero Sabra has many powers, including demolishing Palestinian homes with her mind and assassinating Palestinian children with her laser beam eyes pic.twitter.com/5mye32ZH7f

Several others have taken issue with the name of the character, which they argue is painful for Palestinians, who associate the word “sabra” with the former Sabra and Shatila refugee camps in west Beirut. During the 1982 Lebanese civil war, right-wing Lebanese forces murdered up to thousands of Palestinians and Lebanese Muslims in the camps, while Israeli military forces surrounded the areas; an Israeli inquiry found that Ariel Sharon, in his capacity as defense minister, bore “personal responsibility” for not taking action to prevent the massacre.

Others are pushing back against the critique and arguing that the character debuted two years before the killings at Sabra and Shatila.

Something I never thought I'd tweet, but Marvel calling an Israeli superhero "Sabra" is because Jews born in the region have been referred to as "Sabras" (a local fruit, prickly on the outside, soft on the inside) since the 30s. It's not referencing the Sabra & Shatila massacre. pic.twitter.com/gryr7UIj03

An Israeli cartoonist who a few years before Marvel created a character called Sabraman, who like Sabra sports a blue and white Israeli-themed outfit, has accused the comic book giant of plagiarism.

The cartoonist, Uri Fink, had words of warning for Haas in a recent interview with the Israeli site Ynet.

“I don’t predict her portrayal in Marvel will be positive in woke days such as these,” he said, according to the Times of Israel. “Those who work at Marvel today are all sorts of progressives. I have nothing against them, but we won’t get the most accurate depiction of the Israeli-Palestinian conflict.”

“I suggest that Shira carefully read [the script], so that the character won’t be portrayed in a way that is too problematic,” he added.

Israeli producer Avi Arad, the co-founder and former head of Marvel Studios, the filmmaking branch of the comic book company that has grossed over $25 billion dollars in box office revenue, said in 2012 that he did not expect to see Sabra on the big screen anytime soon.

“We are now in a time when the name ‘Sabra’… it is not so good for selling a film in international markets,” he told the Times of Israel.

Haas was the first Israeli to be nominated for an Emmy, for her role in “Unorthodox,” the Netflix miniseries based on Deborah Feldman’s autobiography about leaving the Satmar haredi Orthodox community in Brooklyn. The diminutive Haas — who stands about 5-foot-2, after surviving an early bout of cancer that stunted her growth — also appeared in the series “Shtisel” and was recently tapped to play a detective in a new Netflix murder mystery series.

This will not mark the first time a Jewish character has appeared in a Marvel onscreen product. “Moon Knight,” the Disney+ miniseries that premiered in March, stars Oscar Isaac as the protagonist, who is Jewish.

But several fans are also expressing surprise and excitement about the choice to resurrect a clearly Israeli hero for a mainstream film.

I've never watched any superhero/comic book movies aside from Wonder Woman, but now I may actually watch the new Captain America film because of Sabra 💙🤍

Wow. Marvel actually got a Jewish actress to play a jewish character. Gotta admit, I didn't see Sabra coming. I'm excited and worried at the same time. Here's hoping they do it right.