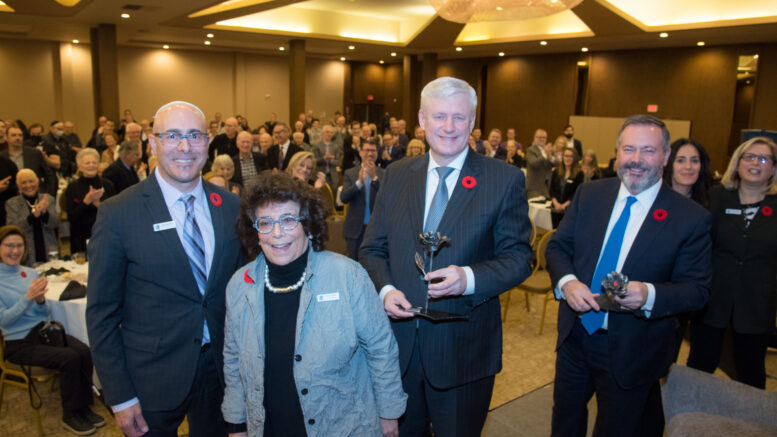 (Calgary) – On a chilly -17 below Monday morning, supporters and members of JNF Canada Calgary were treated to a breakfast at the Beth Tzedec Congregation to hear former Prime Minister Stephen Harper discuss Israel’s place in the Middle East and the World.

In attendance were Jewish community members as well as politicians such as current Alberta Justice Minister, Tyler Shandro. “For me, I have been alarmed by the rise in hate speech related to the Jewish community. Since the Anti-Defamation League started keeping statistics, I think 2021 has seen the largest growth in anti-Semitic incidents in Canada.”

Shandro also spoke about his time working with the Jewish community to help implement the IHRA (International Holocaust Remembrance Alliance) definition of anti-Semitism. “I just spoke yesterday at B’nai Brith…(concerning our government’s adoption of IHRA). We were discussing how our work has set it in motion for other provinces like Manitoba. I’m trying to have school divisions and municipalities implement it as well.”

Steve Gardiner, a member of the community, was interested to hear what Harper might have to say about current events in Israel. “I’m not sure what’s going on with our current federal administration. I don’t trust them (our federal government) and I think they will do anything that they deem to their advantage, which might include something we don’t want to happen to Israel. I knew nothing was going to happen to Israel under his (Harper’s) watch.”

Jennifer Eiserman, a member of the Reform Synagogue, B’nai Tikvah, was concerned about the recent Israeli election, which brought Netanyahu back to power after 18 months in opposition. “I will be very interested to hear what he has to say about that political landscape and how we might approach our support for Israel.”

Moderating the event was former premier Jason Kenney, who cheekily offered his reason for attending. “At 7:30 am on a Monday after a time change, it wasn’t Harper, it was the bagel and blintzes that brought me.”

Kenney recalled his early days in politics, spanning 25 years. “You know, when I first got into politics I didn’t have strong opinions about Israel or close connections to the community. I ended up getting deeply informed about the Middle East conflict. Understanding the historical indigenous presence of the Jewish people in the Holy Land became a central issue in my political vocation.” As Harper was introduced, Kenney offered one more joke where he stated as the morning’s moderator he has been “moderate all along” to a round of applause.

Harper teased about visiting the Hula Valley Bird Sanctuary in Israel named after him as well as the ill-fated plans to rename the YYC airport to the Stephen J. Harper Airport. He discussed his business ventures in Saudi Arabia, meeting with MBS (Mohammed Ben Salman) and how that country was undergoing, in his words, the “most rapid social change in human history.”

(Editor’s note: MBS has been widely criticized for a severe crackdown on critics and it was concluded by the CIA that he had ordered the grisly 2018 “capture or kill” murder of Washington Post correspondent and critic Jamal Khashoggi, which the prince has denied.)

“The extremely popular crown prince has turned the country around socially…turning it into a new Dubai,” said Harper. Referring to their private discussions, Harper said that MBS had told him, “Yes, we (Saudi) worked with you (the West) against terrorism, but we tolerated extremism. Under my (MBS) government, we won’t tolerate it. If you (Saudis) are not teaching a moderate brand of Islam, we will put you in a reeducation camp, and if you are not re-educated, you will be put in prison.”

The Abraham Accords were a major topic of discussion, where while El-Al is no longer flying to Canada, they are now making daily flights to Dubai. Harper stated that he thought the Accords were, “the most positive thing that has happened to the human race in the last five years. I believe Mohamed bin Zayed of the UAE, Netanyahu, and Trump should have received the Nobel Prize for Peace.” Harper also believes peace between Saudi Arabia and Israel will come but only after the death of the King. “I think it is a done deal.”

He gave his assessment of the current Israeli election. “I was not surprised Bibi came back. He is the smartest and best educated of all the international leaders I’ve met. Now, Bibi and his faction, with some pretty far-right parties have a clear majority…but we support Israel’s right to exist whether the government is on the right, centre or left. But anyone who wants proportional representation in Canada, please look to Israel to see why you don’t want it.”

The issue of the war in Ukraine came up as he described Putin as a “James Bond-type villain whom I would never accept a drink from.” Harper suggested the West had failed to stand by its allies in the past. The invasion of Ukraine “should never have happened in the first place. If we had done what George W. Bush and I had wanted, we would have admitted (Ukraine) to NATO. You stand by countries that are threatened to avoid war. You deter through strength. We forgot that lesson. Let’s make sure the West doesn’t forget to do that same thing vis a vis China with Taiwan and Iran with Israel.”

As for questions brought up by Kenney surrounding Poilievre’s tone and tenor flirting with the alt-right in his leadership campaign, Harper had no qualms. Poilievre “is giving a channel for people to vent about how they are being treated. Will conspiracists jump onboard? Absolutely. But in time they leave.”

Attendees left the event with plenty to talk about.

Be the first to comment on "JNF Calgary serves breakfast for Israel: Bagels, Blintzes and Stephen Harper"