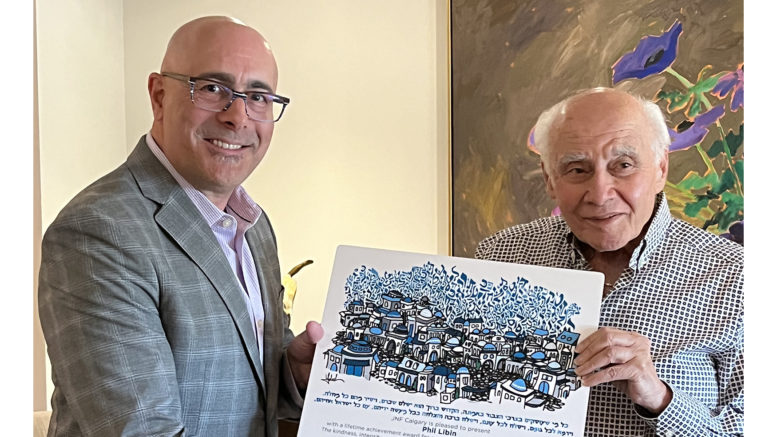 (AJNews) – Some of Phil Libin’s earliest memories are of his parent’s generosity to Jewish causes and his own formative experiences as a fledgling fundraiser for Jewish National Fund (JNF).

Libin has happy memories from his AZA days when he walked door l’door (pun intended) in Calgary’s Beltline collecting coins in support of JNF.

He was one of the B’nai Brith Youth Organization (BBYO) volunteers who went from one Jewish household to the next collecting for JNF – known in Israel as Keren Kayemet L’Israel (KKL). For decades, individuals and families in diaspora communities around the world have helped JNF turn barren land into forests and build recreational, sports and cultural facilities throughout Israel. 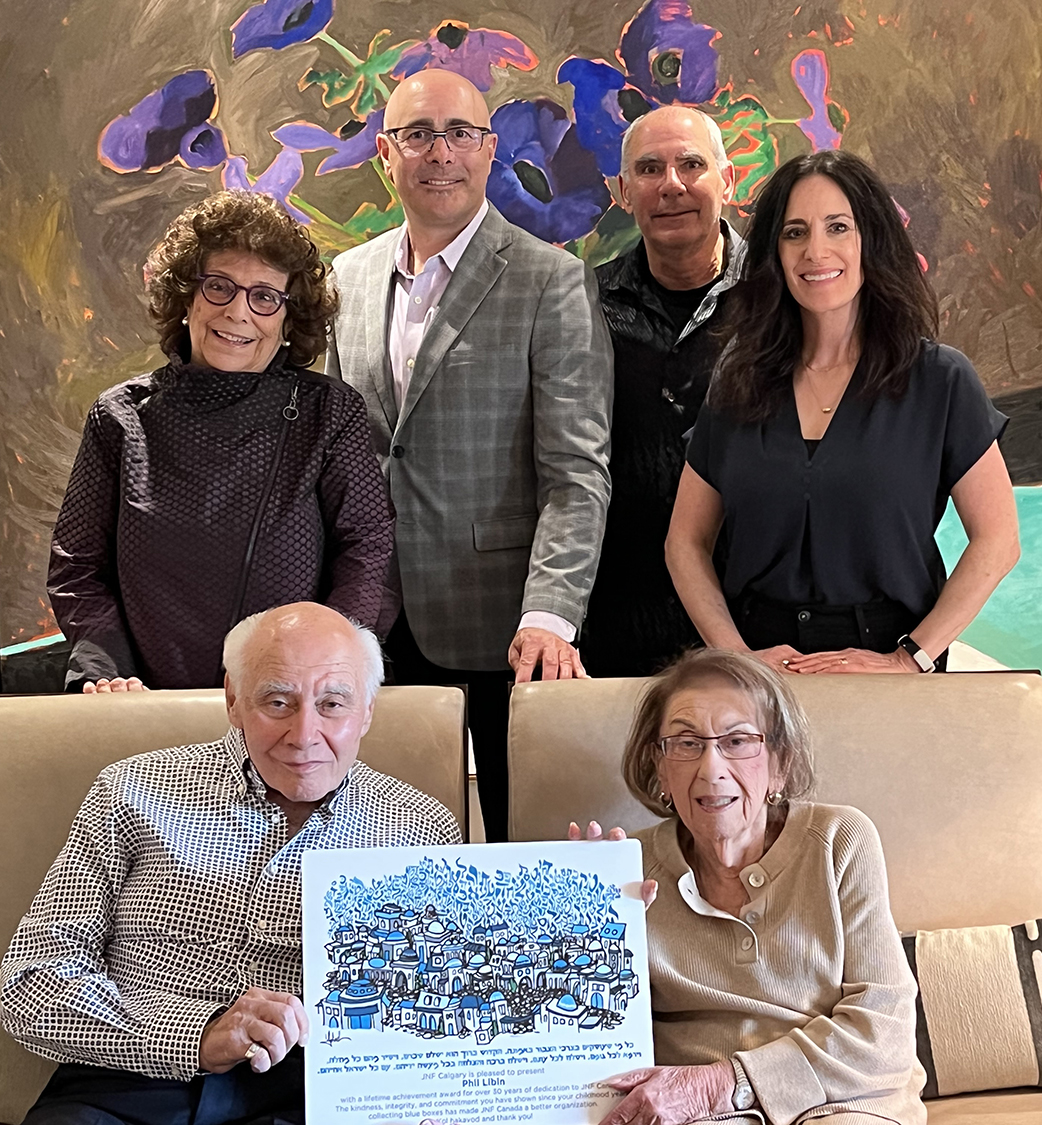 The Libin family was of modest means, hardworking and humble. But Phil fondly remembers how his parents never turned away the shluchim (emissaries) who arrived on their doorstep to raise funds for everything from local Jewish organizations to distant Yeshivas.

These are the lessons that propelled Libin to a lifetime of community leadership and philanthropy most recently acknowledged by JNF Calgary at a small June gathering at Phil and Harriet Libin’s home. There, JNF leaders presented Phil with a lifetime achievement award for his decades of service as a JNF volunteer and board member.

“We’re here to honour Phil Libin, Uncle Phil, for his dedication to JNF,” said Cheryl Gurevitch, JNF Calgary president and Phil and Harriet’s niece by marriage. “You’re a fixture in the community.”

Last year, Libin stepped down from the JNF Calgary board of directors after at least three decades of continuous service, part of a lifelong commitment that began with all those blue and white boxes.

“We want to thank you for your dedication and your commitment,” said Gurevitch.  “And the fact that you are always there and we can count on you.”

“It works both ways,” said Libin who takes much pride in his decades of service, which included his active participation in identifying and recruiting a long line of community leaders and philanthropists chosen as JNF Negev Dinner honourees.

Among many other community honours, Phil and Harriet were themselves celebrated as JNF Negev Dinner honourees in 2001.

Through it all, Phil and Harriett Libin have generously supported their community and the people of Israel. “It’s been rewarding for me…. That’s what I think it is all about…doing something that you feel is worthwhile and important,” says Phil.

“You are an icon both of community service and philanthropy,” said JNF Canada President Beth Price. “You have made JNF Canada a kinder, a stronger and a better organization.  We say that with much love and much pride.”

“I just hope that JNF goes from strength to strength,” said Libin.  “We will continue to support it as long as we are here.”

JNF presented Libin with a beautiful plaque saluting his lifetime achievements. Fittingly, the blue and white art incorporates a Hebrew prayer – part of the Shabbat liturgy – blessing those individuals who tend to the needs of their congregations and communities.

In part, the citation reads, “JNF is pleased to present Phil Libin with a lifetime achievement award for over 30 years of dedication to JNF Canada.  The kindness, integrity, and commitment you have shown since your childhood years collecting blue boxes has made JNF Canada a better organization. Kol hakavod and thank you!”

JNF leaders also shared words of praise for Harriet Libin who has been at Phil’s side throughout the course of their recently-celebrated 65 years of marriage. They are the parents of the late Sheryl Ackman, of blessed memory, and Stuart Libin and shlep naches from four grandchildren.

“We have been blessed,” commented Phil Libin.  “We have had our trials, but you live through many things in a lifetime. The pain doesn’t go away, but you have to go on and do the best you can.”

Well-known and respected in the Calgary business community, Phil Libin is the president of Harmin Holdings Ltd. and continues to be a presence in the hospitality industry as the co-owner of several hotels. He served on the board of the Calgary Convention and Visitors’ Bureau and is a former chair of the Downtown Rotary Club’s Advisory Committee on Fundraising, a committee on which he continues to serve. He was instrumental in raising funds in support of the Endoscopy Centre at the Peter Lougheed Hospital.

In 1992, Libin helped Rotary organize a fundraising dinner where Israel’s former Prime Minister, the late Yitzhak Rabin, was the keynote speaker. In 1999, Libin was awarded Rotary International’s Service above Self Award, which is given annually to only 150 individuals worldwide.

Libin and his good friend Jack Lamarsh raised funds toward the establishment of the Calvin, Phoebe and Joan Snyder Chair in Critical Care Research at the University of Calgary’s Faculty of Medicine. Libin sat on the board of the Canadian Intensive Care Foundation and as an honourary member of the Critical Care Program of the University of Calgary and the Calgary Regional Health Authority.

The Alberta Medical Association presented Libin with a Medal of Honour in 2001 in recognition of his “contribution to quality health care in Alberta.”

A respected leader in the Calgary Jewish community, Phil Libin was the first recording secretary of the former Sha’arey Tzedec Synagogue, later serving as the congregation’s co-president for two terms. He was instrumental in spearheading the amalgamation of the Sha’arey Tzedec and Beth Israel synagogues, culminating in the birth of Beth Tzedec Congregation in the mid-1980s. Libin served on the Board of Beth Tzedec until a few years ago and was the Synagogue’s Gentlemen’s Dinner Honouree and Yasher Koach Award recipient in 1993.

Anyone who knows Phil Libin also knows that he will continue to support JNF and the other Jewish and civic causes that have been near and dear to his heart throughout his lifelong commitment to community service.

Calgary board member Dr. Jim Cohen summed up the warm feelings of so many Calgarians for Phil and Harriet. “I truly believe you are torch bearers for the rest of us to follow. It’s a standard that is held up high to those who will try to emulate what you have accomplished.”