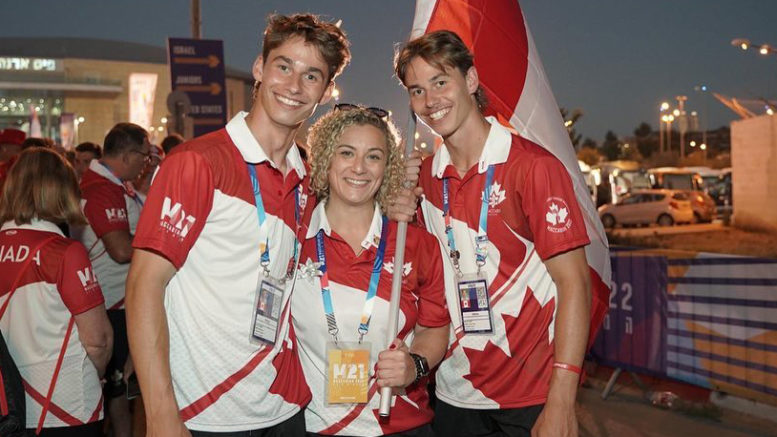 Calgary twins Nick and Conaire Taub and Molly Tissenbaum were the flag bearers for Team Canada at the July 14 opening ceremonies for the 21 Maccabiah Games in Israel. (Photo Maccabi Canada).

(AJNews) – Calgary twins Nick and Conaire Taub are representing Canada at this year’s Maccabiah Games from July 12 – 26 in two capacities — as athletes and flag bearers.

They’re both outsider hitters on Canada’s U19 men’s volleyball team and have played for six years. This is their second Maccabiah Games.

“We competed at the junior Maccabiah Games, where we actually got Bar Mitzvahed at the Wailing Wall, which was a pretty cool experience,” Nick said in an interview with Maccabi Canada introducing the flag bearers, which included the twins and Boston-based but Toronto-raised hockey player Molly Tissenbaum.

The brothers conducted the interview from an RV on their way to Portland, Oregon.

Athletics flow through their blood. Their father participated in the Maccabiah Games as a rower and wrestler and their mother was a track runner. Their dad represented Canada as a wrestler at the 2008 Olympics in Beijing.

“Being able to represent Canada at such a big event while playing the sport that we love is unmatched,” Nick said.

Conaire described representing Canada at the games as the “greatest honour I’ve ever been given, especially on the sporting stage.”

“I don’t really know what I’d do without [sports],” he added.

He said he’s excited to meet other international Jewish athletes. “Last time we went there were only hundreds of athletes, this time there are thousands. What I’m most looking forward to for sure is meeting people from around the world [who] I’m going to be able to connect with, talk to and make memories with during this trip that will last a lifetime,” he said.

“That’s with people I may never see again, or I may see in 10 years, 20 years, but the experiences we share at these games will transcend.”

There are 10,000 participants from 60 countries at this year’s games.

Nick said he “vividly” remembers some people he met last time they participated in Maccabiah, whom he hasn’t seen since. He said he looks forward to catching up with them.

In an interview with journalist Ellin Bessner for the CJN Daily podcast, Conaire said he anticipates there will be “hands-on training” for their flag bearing duties, since the flag is large “and they don’t want us to fall on stage.”

“Other than that, I think it’s very straightforward. We walk it across the stage in front of Team Canada. I guess we’re the face of Team Canada for the beginning of the games,” Conaire said.

Nick said he still travels with a rainbow baby blanket whenever he’s on the road as a good luck charm.

Conaire, for his part, will be wearing an Israeli Volleyball shirt he got from a professional team last time they played in the Maccabiah Games. “They suggested we go to a boarding school, get citizenship and play volleyball in Israel all year round. They just handed us some gear [to get us to] consider it.”

Bessner asked the twins if they’ve encountered anti-Semitism in their athletic careers.

Nick said sports provide a shield against bigotry, since athletes are judged based on their performance.

“Where I live in Calgary, it’s very welcoming and open to the Jewish culture. I know now a lot more Jewish people who embrace all of it in every part of Calgary,” Conaire said, adding that Calgarians are on the whole “all for diversity.”