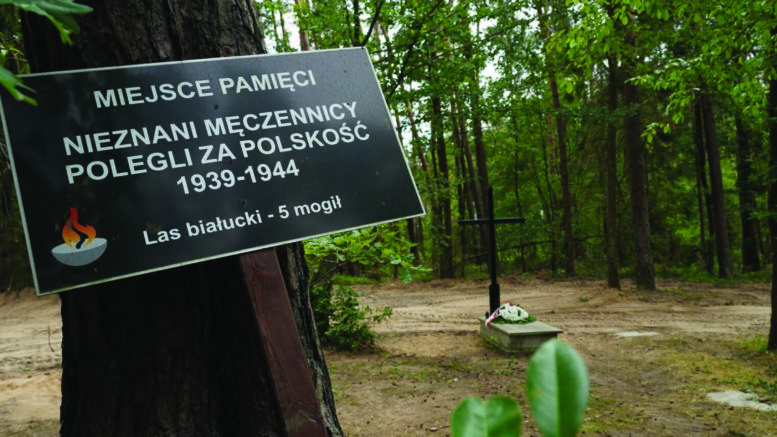 A symbolic grave outside the town of Działdowo, Poland, where a mass grave of about 8,000 Geman Nazi victims from the nearby Soldau concentration camp was unearthed at the beginning of July 2022. (Janek Skarzynski/AFP via Getty Images)

(JTA) — The burnt remains of approximately 8,000 victims of the Nazis were unearthed in a mass grave outside the town of Działdowo, the Polish Institute of National Remembrance announced on Wednesday.

It is believed that the victims were killed in 1939, and most were likely members of the Polish political elite, according to IPN head investigator Tomasz Jankowski.

During the spring of 1944, in an attempt to hide the extent of their crimes, Nazis ordered Jewish prisoners of the Soldau concentration camp, where Jews and non-Jewish Poles were imprisoned, to dig up and burn the bodies.

“It’s the evidence of how thoroughly the Germans tried to obliterate the traces of genocide they committed in Eastern Europe,” IPN said in a statement.

The estimate of 8,000 victims was based on the weight of the remains, a gruesome tally of over 17 tons.

The camp outside Działdowo, which was renamed Soldau during the German occupation of Poland, was part of the Nazi plan to eliminate Jews, political opponents and members of the Polish intelligentsia.

Experts believe that approximately 30,000 people were killed at Soldau, but the true number has never been determined. A search is ongoing to determine if there are more mass graves in the area.

Be the first to comment on "Ashes of around 8,000 Nazi victims found in mass grave in Poland"