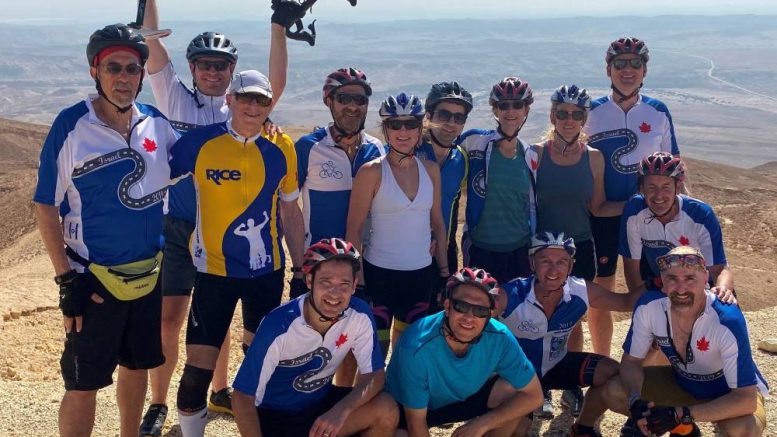 The cyclists were all kitted-up in their brightly coloured cycling gear as they alighted from their bus at the Tzora Forest Planting Center on November 3.  This was the first day of their second week in Israel and the only time since arriving that they did not start the day pedaling to some distant site.  They were here to connect to the land with their hands for a change by planting some trees.

Waiting to meet them was KKL-JNF Forester Eran Zabadi, who warmly welcomed the group and led them up the hill to the tree planting location. Zabadi explained to his Canadian guests why tree planting in Israel was so important and so challenging.

“During your travels over the past week I am sure you cycled through several of our forests. Canadians forests are not new to you; however, unlike in your country, someone physically planted almost every tree you see in Israel.  From the beginning of the last century, KKL-JNF has been very active in afforestation.

“We plant by hand and irrigate the saplings for several seasons until their roots are long enough and strong enough to support them. To date, we have planted almost a quarter of a billion trees.”

Before handing out saplings to his guests, Zabadi told them they would be planting either pistachio or oak. “These are both native species that adapt well to our local conditions. In about twenty years’ time, this plot with your trees will have developed into a fully-fledged forest.”

When it was JNF cyclist Lisa Davidson’s turn to receive a sapling, she asked specifically for an oak. “The oak is known for its strength and longevity,” she said. “I want to plant a tree that will be around for a long time.”

Jason Cairns, the Executive Director of JNF Edmonton, recited the Planters’ Prayer. The participants then made their way to the pre-dug holes prepared for them alongside the drip irrigation tubes, where they placed the saplings into the ground and covered the roots with soil.

Cairns, the organizer of the Bike Mission, explained that while touring Israel by bike was a top priority for the participants, the tree planting ceremony was also high on their agenda.  “Everyone on this mission is thrilled to be in Israel and was looking forward to this ceremony. This is our third biennial Israel Bike Ride and 10 out of the 14 participants have come along at least once before. All are residents of Edmonton except our oldest member, who is from Niagara Falls.”

Cairns said that he came up with the Bike Mission to Israel idea some four years ago when he was looking for a unique way to present Israel to first-time visitors. “The response was phenomenal. We found that this was an exciting way to see Israel. Look at this group, for example. The ages range from 25 to 82. Not all are bikers, and their skill levels vary greatly. In fact, they vary in every way possible and that promotes interesting dialogue. After our arrival on Monday last week, we rode throughout the north of the country daily until Friday. It was tough but loads of fun and very interesting and educational. We spent the Sabbath resting in Jerusalem and today, after the tree planting and a brief visit to the Tzora Winery, we will be back on our bikes heading south.”

One of the enthusiastic Israel Bike Mission first timers was Gary Wolch, who is married to an Israeli and has been to the country many times before.

“I have never experienced Israel so intensely. Riding in the open air together with others on an organized tour is a winning combination. Everything is up-close and in your face. I saw places and scenery that my wife’s Israeli family has never been to.”

Edmonton resident Ken Soroka was another first timer on the tour. Ken said that his most unforgettable experience so far was while riding on the Golan Heights. “We came across soldiers of the Golani Brigade in training. It was magnificent watching those youngsters in action. Later they literally held their fire so we could ride across the area.”

“This is a fabulous way to experience Israel. From the vantage point of a bike saddle, one can see, touch and smell the country. There is nothing like it.”

Erin and his 80-year-old father Harvey Wright from Niagara Falls have both participated in all three Bike Missions. Erin said that his father is an avid bike rider and has had no difficulty whatsoever in keeping up with the group. “Dad cycles long distance regularly at home,” he added, “and I think he could still outride many of us.”

Harvey, who was wearing a 2017 Israel Bike Mission riding shirt, said that in the early days, he brought his son on trips to Israel and now Erin brings him along. “Our first trip to Israel was in 1980 when the family came to celebrate Erin’s Bar mitzvah at the Kotel, the Western Wall. Since then we have been countless times. Last year we were at the Kotel once again to celebrate my youngest granddaughter’s Bat Mitzvah. In between all that I manage to take part in the bike rides and I hope that I will manage to continue visiting Israel in the years to come.”

Retired Edmonton accountant Jerry Glasser, who was filming the entire trip with his helmet-mounted video camera, said that he was looking forward to start viewing and editing the material. “We have been on the most beautiful routes. Some were quite difficult as well. Probably the most difficult site to reach by bike was the ascent of Mount Bental overlooking Syria. However it was so beautiful that the tough climb was worth it.”

After the new trees were safely ensconced in their new home, Jason Cairns presented each participant with a personalised KKL-JNF tree-planting certificate.

The group was then ushered back onto the bus by Dolev Arbeiter, their KKL-JNF tour guide, for their next stop that morning: A short visit to the nearby Tzora Winery to sample the local wines. Arbeiter warned them not to drink too much and not to linger because they still had a rough 30-kilometer cross-country ride ahead.  “We plan to mount our bikes and ride across the beautiful KKL-JNF British Park and then continue west to the area of the Masmiya Junction. And that,” he told them, “is all before lunch.”

Be the first to comment on "JNF Bike Mission: There is no better way to see Israel"