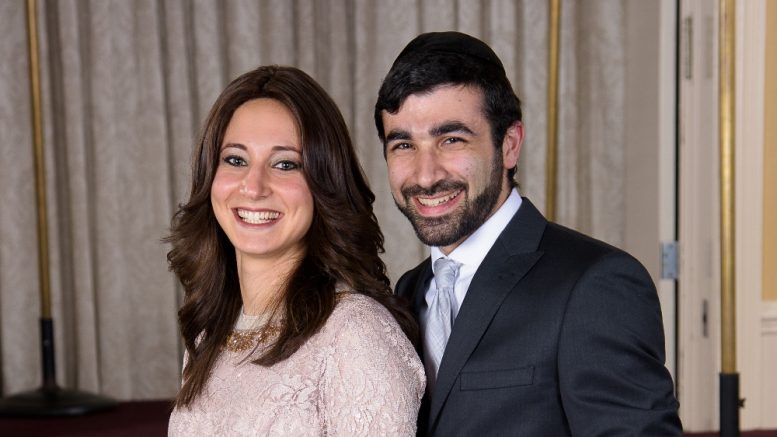 Rabbi Binyomin and Rebbetzin Malka Halpern. The installation ceremony for House of Jacob-Mikveh Israel takes place on Sunday, February 9 at the Carriage House in Calgary.

(AJNews) – It will be a bit of a family reunion when the House of Jacob-Mikveh Israel congregation in Calgary celebrates the installation of Rabbi Binyomin and Rebbetzin Malka Halpern at a gala dinner on Sunday, February 9.

That’s because the evening will feature guest speaker Rabbi Aryeh Rockove, the father of Mrs. Halpern. For Rabbi Rockove it’s a chance not only to meet members of Calgary’s Orthodox shul, but to renew ties with his three Calgary grandchildren – Sarah, age 7, Ahuva, age 6, and Shneur, age 3.

The gala dinner taking place at the Carriage House is also honouring donors who participate in the Life & Legacy program of the Harold Greenspoon Foundation, that promotes after-lifetime giving to support important Jewish institutions, such as schools, synagogues and other Jewish entities.

While the actual installation is a significant event, Rabbi Halpern and his wife Malka are certainly no strangers to Calgary. They came here late in 2017 to teach at the Halpern Akiva Academy.  Rabbi Halpern also became assistant rabbi at the House of Jacob, under the tutelage of the retired Rabbi Yisroel Miller.

“I’ve long been an admirer of Rabbi Miller . . . I’ve read many of his books . . . so when the opportunity arose to come to Calgary, we seized on it with great enthusiasm,” said Rabbi Halpern.

Malka Halpern, a teacher by choice and by training (as a child she used to give “lessons” to her mother), loves her work at the school and is very pleased at how the dynamic young couple have been received in Calgary.

“It just seems to me that people here have a very wholesome attitude and take a well-rounded approach to life,” she said. “People are not so much in a rush like in the big cities in the eastern U. S.

“Here they will actually stop and listen to what you have to say. People are very willing to work together on projects. If anything needs doing people are very eager to help each other out.”

Rabbi Binyomin Halpern met Malka when he was studying at New York’s Rabbinical Seminary of America (Yeshivas Chofetz Chaim). After their marriage he joined the Yeshiva’s Kollel program for six years. Upon receiving his rabbinic ordination (semicha) Rabbi Halpern went on to become a founding member of the Kollel at Yeshiva Tiferet Moshe at Hillcrest, New York.

Malka holds a dual major in education and special education, with a concentration in Judaic studies. As well, she has a master’s degree in literacy and a teaching certificate from Misrad HaChinuch in Israel. She started teaching and directing programs at the Hebrew Academy of Nassau County in Long Island, a position she held for nine years.

Both Rabbi Binyomin and Malka Halpern come from rabbinic families where the stress was on building Jewish community.

“Seeing the path that my parents took in pursuing careers in Jewish leadership and the fulfillment that they received from those decisions, inspired me to want the same for myself,” he stated.

Rabbi Halpern was raised in Milwaukee, Wisconsin, which like Calgary, is a bit off the Jewish main street in North America. But he learned to appreciate the tight-knit community and shared in the passion of most Wisconsinites – the Green Bay Packers.

Malka Halpern grew up in the Queens borough of New York city in a community of largely German Jews who escaped Hitler just before the war. Besides his rabbinic duties her father took a special interest in working with children who needed help with learning. He was also involved in summer camp, which gave the family a real love of the outdoors.

Rabbi Halpern is also a certified mohel and a sofer (scribe). He is the author of several books on Halacha (Jewish law) and topics including Hilchot Sta”m (scribal laws) and kashrut.

“Our HOJMI family has welcomed us from day one,” said Rabbi Halpern. “We love being part of such a warm community that is focused on spiritual growth and serving Hashem – each person in their unique way.

“If you are not yet part of it, please come and see for yourself.

Be the first to comment on "New Rabbi installed in Calgary: February 9"