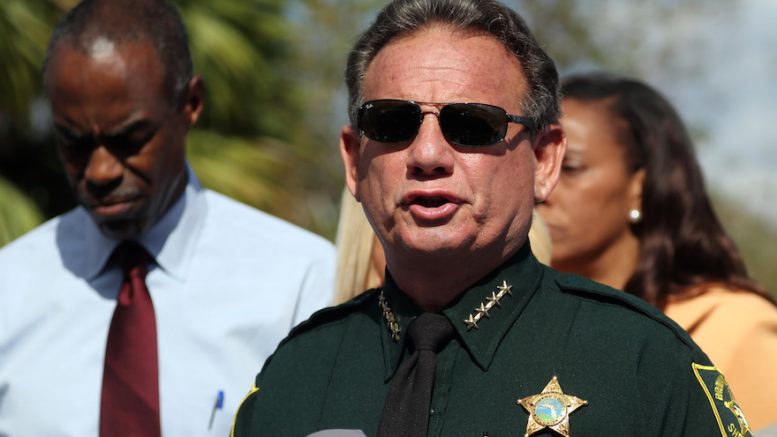 (JTA) — As he leads the police response to the school shooting in Parkland, Florida, Broward County Sheriff Scott Israel is likely enduring some of the toughest days of his career. And he’s probably looking to his Judaism to guide him through it.

Israel is the county’s first Jewish sheriff, and it’s an identity he has embraced. A 2016 campaign flier reported on that year by the South Florida Sun-Sentinel centers on the role that faith in general, and Judaism in particular, plays in his life.

“My Jewish faith is a central part of my entire life,” the flier quotes Israel as saying. “My late father Sonny Israel fought in the Korean War and became a police officer because he believed in the call from the Talmud that ‘Whoever saves one life saves an entire world.’ Those words guided my brother and I, as we also became police officers.”

Israel is the sheriff in charge of the area that includes Marjory Stoneman Douglas High School, where 17  faculty and students were killed by a gunman on Wednesday. Israel’s children, triplets, had attended the school. In a video recorded by a local NBC affiliate, he called the mass shooting a “horrific, homicidal, detestable act.”

“This is a terrible day for Parkland, Broward County, the state of Florida and the United States,” he told reporters that day. “My very own triplets went to that school and graduated, in Stoneman Douglas. They played football and lacrosse at that school. It’s just catastrophic. There really are no words.”

Israel graduated from what is now the State University of New York at Cortland in 1977 with a degree in political science, and subsequently took a variety of courses on law enforcement, including a course of study at the FBI National Academy. He joined the Fort Lauderdale Police Department in 1979 and served on the narcotics unit and the SWAT team.

A Democrat, he was elected sheriff in 2012 and re-elected four years later. The county is home to a large Jewish population. In the 2016 campaign flier, he mentioned fighting gun violence as one of his top issues.

In speeches, Israel is known to quote the Bible. A 2013 Sun-Sentinel article about him quoted a speech in which he referenced “Eishet Chayil,” the Jewish poem about a valorous woman excerpted from Proverbs and traditionally sung on Friday night, as well as Ecclesiastes.

“As Broward’s first Jewish sheriff, I carry a heavy burden knowing I am making history,” the campaign flier said. “That is why I always strive to do what is right, what is best, what will help people. This is why this message is important — regardless of your personal faith — because I want my children and grandchildren to always be able to look back with pride someday at my legacy as they continue to pass down our faith and legacy of public service.”

Israel told the Sun-Sentinel that he attends the Parkland Chabad, and he is comfortable in churches as well as synagogues. His wife, Susan, is Christian, and they raised their children in both religions.

“I am Jewish,” he told the Sun-Sentinel. “Susan is Christian. Like most families with parents of different faiths, we raised our children with extensive exposure to both our faiths. The triplets were all bar/bat mitzvahed. Now that the triplets are adults, they each have the free choice to decide their own faith.”