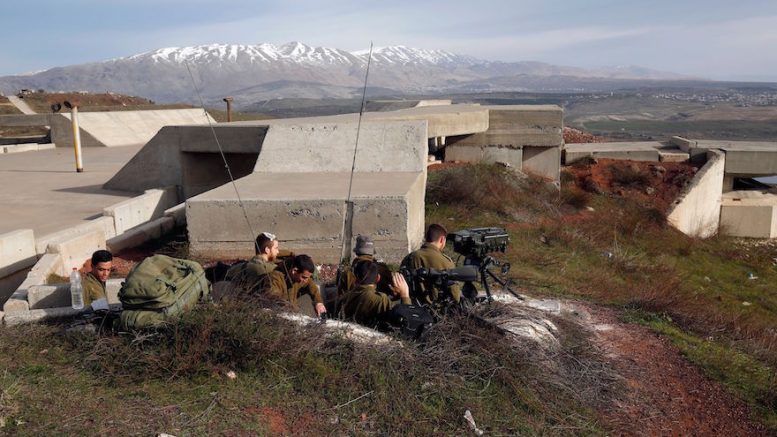 (JTA) — Israel and Iran have been clashing for years. But on Saturday, February 10, their war of words briefly became an actual fight.

In short succession, Iran sent a drone into Israel, Israel shot it down and took out the drone launcher in Syria, Iranian-allied Syria downed an Israeli plane, and Israel bombed Syrian bases.

Are Israel and Iran at war? Will Israel be intervening more in Syria’s civil war? How will this affect Israel’s dormant but never-ending conflict with Hezbollah, the Lebanese militant group and Iranian proxy?

Here’s a rundown of what happened, where it’s all coming from and what — if anything — it means for the future of Israel and its neighbors to the north.

On Saturday morning, Iran sent a drone into Israeli airspace and Israel shot it down. While Iran sponsors groups and countries that have attacked Israel, this appears to be the first time it has directly violated Israeli territory.

In response, Israel bombed the drone launcher, which was in central Syria, near the city of Palmyra. Syria, an ally of Iran, retaliated by downing one of the Israeli F-16 jets that had struck the drone launcher. The Israeli pilots managed to eject over Israeli territory, evading capture. One has been released from the hospital and the other is recovering.

Israel responded to the downed jet by bombing a dozen Iranian and Syrian military targets in Syria. On Monday, Israeli military officials estimated that the strikes had wiped out about half of Syria’s air force.

Since then, there have been no further clashes among Iran, Syria and Israel.

Israel has long been at odds with Iran and Syria.

It isn’t news that Iran and Israel are at each other’s throats. Iranian leaders have called for the destruction of Israel and bankroll militant groups that have been attacking Israel for decades — primarily Hamas in Gaza and Hezbollah in Lebanon. Threats by Iran to wipe Israel off the map have fueled Jerusalem’s blanket opposition to Iran’s nuclear program.

Iran is also a major sponsor of Syrian President Bashar al-Assad. Syria has been technically at war with Israel since their last conflict in 1973. Iran provides Assad’s regime with funding, and Hezbollah has been fighting on Assad’s side in his civil war against a range of opposition groups.

Israel’s prime minister, Benjamin Netanyahu, has made opposing Iran the singular focus of his administration since he returned to office in 2009. He has focused most of his fire on the 2015 deal to curb Iran’s nuclear program, and has warned repeatedly that allowing Iran to obtain nuclear weapons threatens Israel’s existence.

But Netanyahu has also criticized Iran’s regional aggression, its human rights record and its role in Syria’s civil war. His opposition to Shiite Iran has drawn him closer to Sunni Arab states like Saudi Arabia, which are also wary of Iran becoming too powerful.

And while Israel as a policy tries to stay out of the Syrian civil war, it has bombed weapons shipments between Syria and Hezbollah. The concern is that Hezbollah will use those weapons to attack Israel. An Israeli Air Force official said that Israel has conducted thousands of missions in Syria just in the past year.

But Iran’s drone suggests that it’s getting more assertive.

Since Syria’s civil war began in 2011, Iran and its proxies have been focused mostly on helping Assad fight opposition forces. But now that Assad looks like he’s going to win, Iran may be looking to set up bases on Syria’s border with Israel. Using those bases, either Iran or Hezbollah could attack Israel, opening up another front in their conflict.

“As the Assad regime gains the upper hand, Hezbollah probes the southwest and Iran seeks to augment its partners’ military capacities, Israel has grown fearful that Syria is becoming an Iranian base,” read a report by the International Crisis Group that was released days before the drone flight. “A broader war could be one miscalculation away.”

Netanyahu, in condemning the attack, said the Iranian drone validates his warnings about Iran’s aggression. He said Israel “will continue to do whatever is necessary to protect our sovereignty and our security.”

“Iran seeks to use Syrian territory to attack Israel for its professed goal of destroying Israel,” Netanyahu said in a statement Saturday. “This morning Iran brazenly violated Israel’s sovereignty. They dispatched an Iranian drone from Syrian territory into Israel. And this demonstrates that our warnings were 100% correct.”

Will this mean (another) war?

The Israel-Syria border quieted down after Saturday’s conflict, and Israel and Hezbollah haven’t meaningfully fought each other since 2006. But were this weekend’s strikes the opening shots of another war?

Both the International Crisis Group and Naomi Chazan, a left-wing former Israeli lawmaker, called on Israel to take diplomatic steps to reduce the chance of a war on the Lebanese and Syrian borders. Hazan wrote in The Times of Israel that a war with Hezbollah could draw in Hamas, who control Gaza, leading Israel to fight a war on multiple fronts at the same time.

“The danger of military escalation on several fronts simultaneously increases exponentially,” she wrote. “If [Israel] is to be a major player — and not just a spoiler — it has to consider striking diplomatic, economic and political alliances throughout the region.”

But Emily Landau, a senior research fellow at Israel’s Institute for National Security Studies and an opponent of the Iran deal, said Saturday’s events should make Europe and the United States do more to counter Iran.

“Time for Western world to recognize Iran for the regional menace that it is, and Europe must sharply change course — toward Iran’s regional aggression and its nuclear aspirations,” she tweeted Saturday. “Continuing to appease this regime will drag the region to war.”

The U.S. supports Israel’s actions — but some say it should do more.

As it usually does, the United States is backing Israel’s strikes over the weekend. The White House tweeted a statement of support and Defense Secretary James Mattis said that Israel shouldn’t have to wait until its people are killed to defend itself.

“Israel is a staunch ally of the United States,” the White House statement said. “We support its right to defend itself from the Iranian-backed Syrian and militia forces in southern Syria. We call on Iran and its allies to cease provocative actions and work toward regional peace.”

But Republican and Democratic former officials are criticizing the administration because Secretary of State Rex Tillerson isn’t visiting Israel on a trip this week to the Middle East. A visit to Israel, wrote former U.S. Ambassador to Israel Dan Shapiro, could be a chance to both bolster and coordinate with a key ally.

“But oddly, Israel does not appear on the itinerary,” Shapiro wrote Monday in Haaretz. “Tillerson’s stops include Amman, Ankara, Cairo, Kuwait City, and Beirut, but not Jerusalem. That made little sense before the Iranian incursion yesterday. It would be malpractice now. The Secretary needs to come to Israel.”

Be the first to comment on "Israel, Iran and Syria just traded blows. Does this mean war?"