Yom Ha'atzmaut: Israel's Independence Day is a good time to rethink Israel advocacy. The event will be celebrated in Edmonton on May 12 at the Beth Israel Synagogue with a wonderful concert by the moshav band.

When speaking to Jewish audiences about advocacy, I often refer to my own background as a Jewish convert in making the point that we sometimes have to apply a fresh perspective – and have a collective “out-of-body” experience – to understand the reality of our own circumstances. Sometimes we are too close to the situation to evaluate it with clear eyes and objectivity. 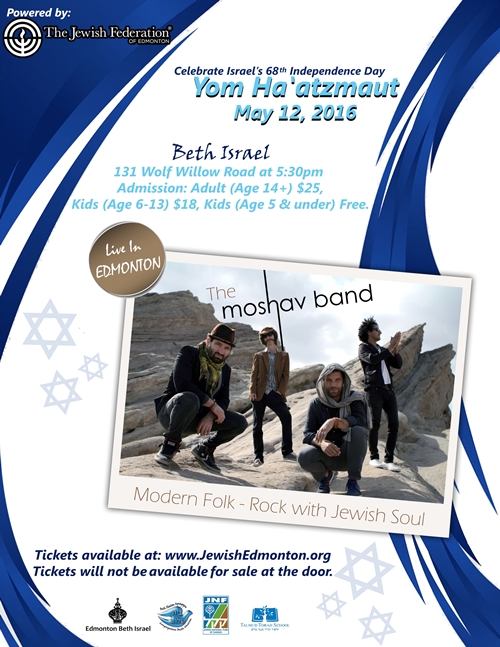 Among the many things that make me proud of my father is the fact that, early in his career, he chose to serve the public as a police officer. I have heard it said that police disproportionately interact with the most challenging and marginal elements of society, perhaps just 5% of the public, on a regular basis. Just as one in such a role knows their daily encounters are not representative of broader society, we as Jews – who understandably take notice of antisemitism and anti-Zionism – must be cautious not to attribute these toxic manifestations to the majority of Canadians.

I could write an entire series of columns on how we as a community have far more allies in the non-Jewish world than we often realize. Instead, I’ll offer two factors internal to the Jewish world that suggest pro-Israel advocates should be optimistic.

1. There is far greater unity of purpose – and welcoming of diversity – in the Jewish world than we often realize.

In the past, there was significant disagreement between Jews on the best means to secure the future of the Jewish people in an often hostile world. The community was split along various lines: between Zionists and non-Zionists, assimilationists and Orthodox Jews, socialists and capitalists.

Today, post-Shoah and post-1948, the overwhelming majority of Jews are Zionists in that they believe the State of Israel should exist and thrive as a democratic Jewish homeland. Among Zionists there is extraordinary diversity: we are Labour and Likud, religious and secular, social activist and academic alike.

There is ceaseless debate over how Israeli policies can best secure the ideals of Zionism and how Diaspora Jews can engage Israel in a meaningful way. This is all healthy. We wouldn’t be Jews if we didn’t subject these issues to serious thought and debate.

But this occurs within a strong consensus that Israel’s existence is fundamentally just, a blessing to the Jewish people and the entire world, and ultimately the centrepiece of our collective future just as it is our ancestral homeland. These aren’t just clichés; they are ideals brought to life every time a young Jewish Canadian boards a plane for Birthright, challenges anti-Zionism on Facebook, downloads the latest Israeli music, or volunteers for the IDF.

2. Despite facing serious challenges, Israelis are far more successful, happy, and optimistic than we often realize.

While Israelis have suffered in every generation from war and terrorism, none of this detracts from the fact that the IDF has proven its capacity to provide Israelis with secure borders and an astonishingly high level of public safety. This is no mean feat in the Middle East, let alone for a country smaller than Vancouver Island.

At the same time, Israel has seen remarkable economic and technological success. From 1992 to 2013, Israel-China trade skyrocketed from $50 Million to $10 Billion annually. Israeli exports to Europe have nearly doubled since the boycott-divestment-sanctions movement was launched in 2005. Trade with emerging markets like India has likewise spiked. Outside Silicon Valley, Israel now has the highest concentration of high-tech firms on the planet.

Success at a macroeconomic level does not mean there aren’t serious challenges. The cost-of-living, for example, continues to be a burden for many Israelis. But with each passing generation, Israel grows stronger economically and Israelis are afforded greater opportunities to learn, work, and engage the world.

Israelis also enjoy a remarkably high quality of life. Israelis have the same life expectancy as Canadians (81) and Israel boasts a universal healthcare system that typically beats Canada in international performance rankings. According to the OECD’s 2015 “Better Life Index”, which measures various social and life factors, Israel is the fifth happiest country in the world – ahead of Canada, the United States, and most of Europe.

What would early Zionist thinkers like Theodor Herzl and his contemporaries say if they could read these statistics and walk the streets of Jerusalem or Tel Aviv today?

How often do we forget how far we have come as a people?

I had the honour this February of leading a group of Canadian masters-level students on a public policy study trip to Israel, one of many fact-finding missions we organize (CIJA annually brings some 200 Canadians to Israel). The students, all of whom are non-Jewish, were amazed at the innovation, diversity, and vitality shown by Israelis despite living in the world’s most unstable neighbourhood. They instantly saw what we should never lose sight of: a country and a people from whom we can learn so much.

Indeed, Israel embodies so much of what’s right in the world today – and it is on this basis that we should share all that Israel has to offer with the world around us.

Steve McDonald is Deputy Director, Communications and Public Affairs, of the Centre for Israel and Jewish Affairs (CIJA)

Be the first to comment on "Yom Ha’atzmaut: A good time for a positive rethink on Israel Advocacy"