The Edmonton Jewish Hockey League recently celebrated its 2016 year end party as well as the 30th anniversary of league play in Edmonton. Photos by EJNews

(EJNews) – Another milestone event was held in the Edmonton Jewish community last week. The Edmonton Jewish Hockey League held an informal banquet to celebrate the end of the season and to mark the 30th Anniversary of EJHL. 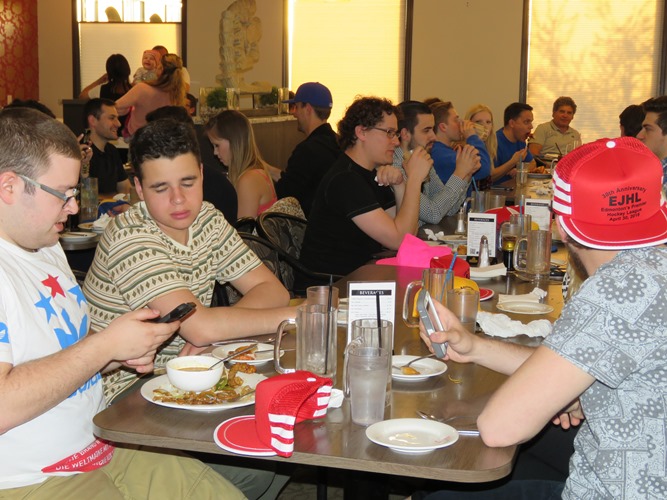 Along with friends, family, and alumni, all four teams came together to celebrate the end of the season.

The four teams that comprise Jewish Hockey in Edmonton – the 2016 champs: HeAtBaGs, second place finishers: the West Edmonton Mall Maulers, the ACME Scrappers and Team Aldan – came together in camaraderie to enjoy an evening of food, fun and trophy presentations.

Over 60 players, alumni and fans gathered to celebrate the end of the season and to enjoy the comedy of Brian Stollery – winner of Canada’s Next Top Comic. Brian hilariously poked fun at the league, at some of the players, at himself and of course at the city of Edmonton (being that he now lives in Calgary). All in all it was great fun and there were some good laughs for everyone. 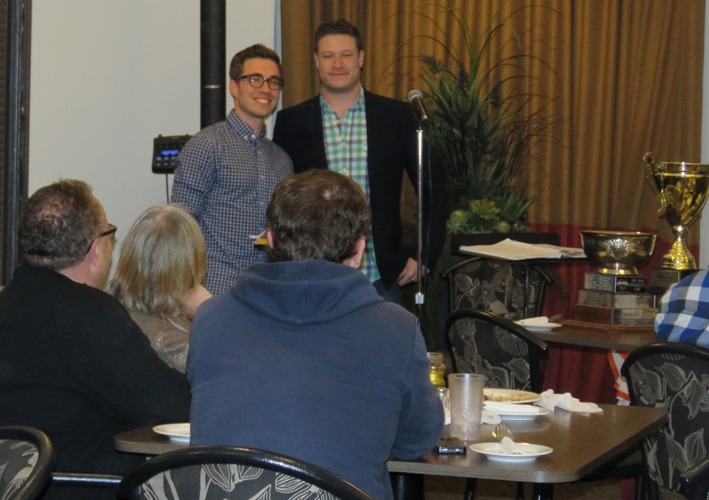 The highlight of the evening was the handing out of league awards to the deserving players who shone during this year’s season as well as the crowning of the HeAtBaGs as the 2016 holders of My Son Stanley’s Cup.

Winner of the league’s Most Valuable Player Award went to Dylan Muscat from Team WEM. The Most Improved Player of the year was awarded to two players – Sam Stevens and Bryce Harper – both from Team WEM. The league’s Top Defenseman Award went to Kent Richardson from HeAtBaGs and the Top Goaltender was Daniel Moser. Top Scoring Honours went to Noah Soifer, also from the HeAtBaGs. 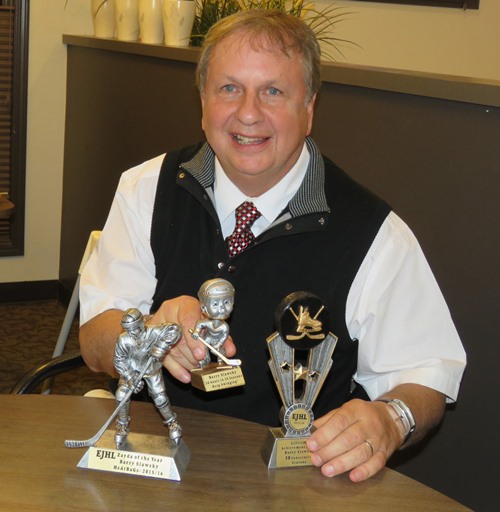 Barry Slawsky was awarded League Zayda of the Year. He was also presented with an achievement award for having played in every season of the league’s 30 years in existence.

To mark the 30th Anniversary of the Edmonton Jewish Hockey League, a special award was presented to Barry Slawsky who has played in every year that the league has existed. He gave a heartfelt speech thanking the league for the acknowledgement and encouraging younger players to continue playing.

“Hang in there long enough and you will get an award – no matter what your skill level is,” he joked. Slawsky held up jerseys from his many years of EJHL including those from playing (and sponsoring) Team San Francisco Gifts.

Mario Morin, captain of The ACME Scrappers, thanked Dan Moser and Adam Zepp for their efforts in organizing the league this year.

While celebrating the victory of the HeAtBaGs winning the 2016 My Son Stanley’s Cup, Dan Moser concluded, “Thanks to all those involved that helped make this a fantastic season: the sponsors, the league staff, the referees, the team Captains, and the players. I hope to see you all on the ice again next year for another great JHL season. 30 years from now I have a feeling we will be celebrating Barry Slawsky’s 60th consecutive season in the League.”

Click here to see photos from the Championship Finals.  Scroll down to view the rest of the trophy winners. 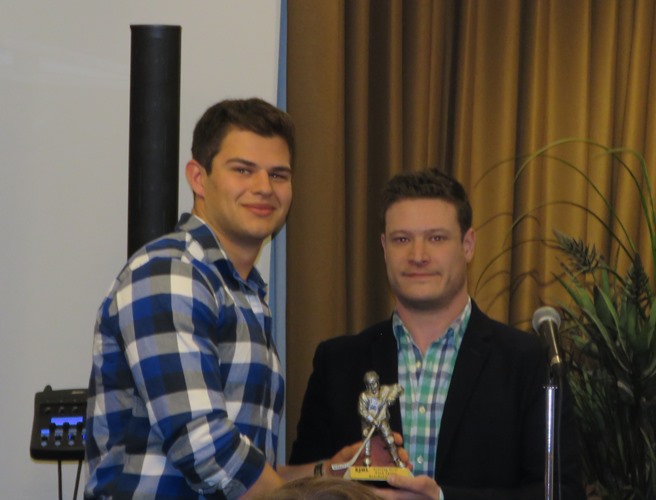 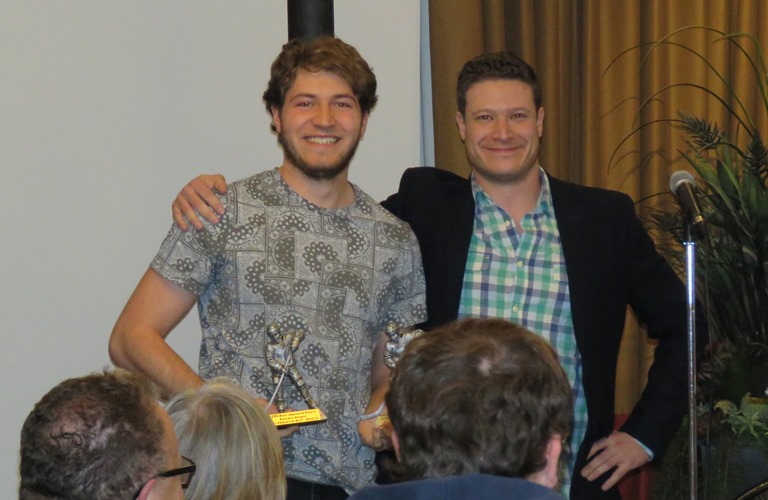 Two of the league’s players tied for the Most Improved Player Awards – Sam Stevens (pictured above with Dan Moser)  from Team WEM and Bryce Harper, also from Team WEM. 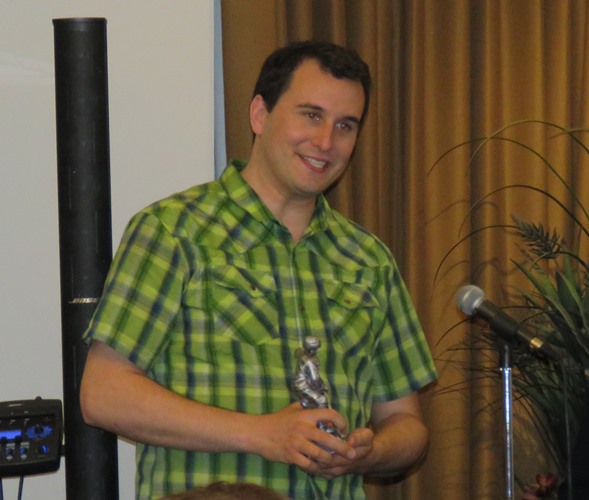 Kent Richardson from the HeAtBaGs was awarded Top Defenceman. 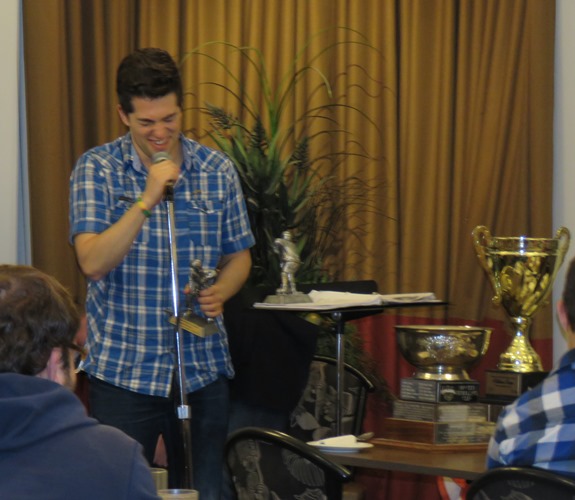 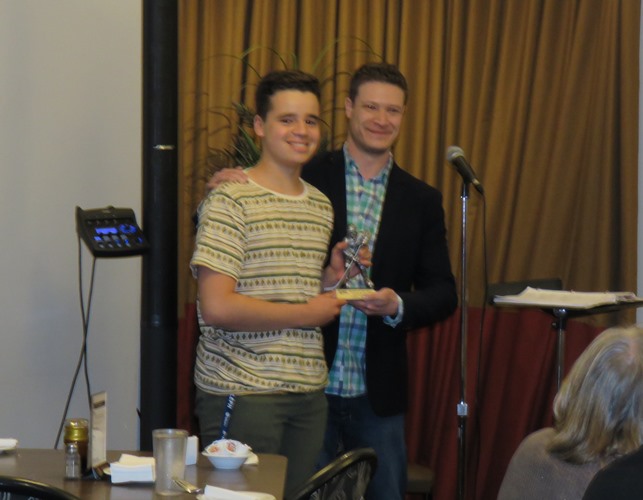 Jacob Oshry from Team Aldan was awarded Rookie of the Year. 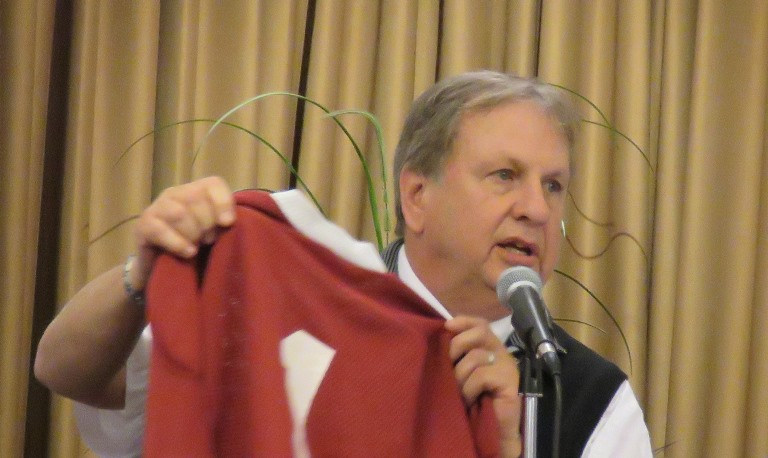 Team HeAtBaG’s Barry Slawsky displayed some of the jerseys that he collected over his 30 years of league play – several were from Team San Francisco, a team he both played in and sponsored over many years.